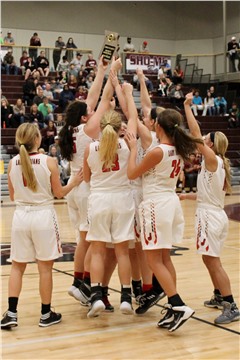 In each of the six seasons Tyler Abernathy has been the head coach for the Jackson girls basketball, the Indians have reached the Class 5 District 1 Tournament Championship six times.

Before heading into this contest, Jackson and Poplar Bluff faced twice already this season with the Indians coming out on top in each contest.

“The girls played well, they were focused, they executed well and played hard,” Coach Abernathy said. “Everyone likes to look at previous games, but you’ve still got to play the game tonight, and tonight we played really well.”

Coach Abernathy has had his team focus on the mentality of getting better each day this season because teams have to be playing their best basketball at the end of the year to win championships.

Something that helped Jackson be able to press and take the ball away from Poplar Bluff’s offense according to Coach Abernathy was the fact the teams played twice before the district championship game.

The Indians forced a total of nine turnovers in the game with six coming in the first half.

“If there was one positive of playing them multiple times — you can get an idea of how they are trying to run things,” Coach Abernathy said. “I thought we had a good idea of how we could guard them at a high level — I thought that’s what we did. We were able to switch some things up, which I think threw their younger kids off a little bit but we played well.”

Three players tied for the team-high in steals with two. Those players were senior forward Abby Hermann, junior forward Mah Massey and senior guard Nikki Sotak, who also combined for 18 points in the game.

Hermann and Sotak were also key in Jackson’s passing attack by combining for 12 of the team’s 20 assists with Hermann having eight.

Two of Hermann’s assist went to senior guard Rylee Stafford who scored a game-high 23 points. Fifteen of Stafford’s points came from beyond the arc.

Jackson’s ability to make 3-point shots has been key for the team all season. Coach Abernathy praised Stafford, Hermann and Sotak for their shooting in the game, which helped lead Jackson to shoot 70 percent from the field.

Going back to Hermann finding an open Stafford for three is how the game started. Even though 27 seconds passed without a score in the game, Stafford hit a 3-pointer assisted by Hermann to put Jackson on top of the Mules 3-0.

The Indians went on a 7-3 run before Poplar Bluff took its only lead of the game at 8-7 with three minutes, 42 seconds left in the first quarter.

Poplar Bluff junior center Shelby Sievers scored the two points to take the lead, but sophomore center Alexis Allstun for Jackson was determined to win the fight in the paint against Sievers.

Allstun finished with a team-high six rebounds, and one of those was an offensive rebound that Alexis put in the basket for two as Jackson regained the lead for the entirety of the game.

“[Alexis] got in foul trouble tonight, which is amazing that we played as well as we did with her sitting on the bench for what felt like three fourths of the game,” Coach Abernathy said. “I thought [Sievers] played well early, but Alexis came out, and she played real well early, which I thought set the tone. That was really important for us.”

After Jackson was up 12-10 with 1:26 left in the first quarter, the Indians went on an 11-0 scoring run that was capped off by four points from Sotak.

This allowed Jackson to take an 18-point, 33-15 lead over Poplar Bluff heading into halftime. The Indians went on a 13-0 scoring run to go up 48-20 in the third quarter where Stafford scored eight of her 23 points.

The 3-point shooting, scoring runs and pressing defense proved to be too much for Poplar Bluff, leading to Jackson defeating the Mules by 35 points at 65-30.

Heading into the Class 5 State Playoffs, the Indians will face Ft. Zumwalt South (16-10) in the sectional round on March 8 at Jefferson College.

In the past three sectional playoff games Jackson has played in under Coach Abernathy, the team has yet to come out with a win. The last sectional Jackson played was in 2015 and the Indians lost to Kirkwood 49-36.