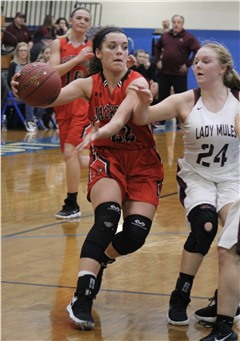 Despite losing its lone returning starter for this season to injury, the Jackson girls basketball team was able to capture its second-straight Class 5 District 1 Championship.

The Indians did so with a 48-32 win over SEMO Conference opponent Poplar Bluff, which Jackson fell to 43-39 in the regular season.

“I’m so proud of these kids,” Jackson head coach Tyler Abernathy said. “There were only two kids in this game tonight that played at all in our district game last year. They came off the bench and played sparingly at times, but this group just competes. As the year has gone on, we’ve had some lows and some highs and learned some things about each other, but they play together, they like each other and I love them to death.”

Scoring a game-high 21 points for Jackson was junior forward Kalli Mayfield, who was one of the players to come off the bench for the Indians last season. Mayfield was also able to record a team-high six rebounds.

Most of these points came off fastbreak opportunities as Jackson forced Poplar Bluff into making several turnovers as the Indians were deflecting and jumping infront of passes throughout the game.

“Kalli can really attack the basket — she’s just a competitor,” Coach Abernathy said. “You get frustrated with her sometimes, but at the end of the game you’re like, ‘Man. She had 20 points and eight rebounds.’ That’s that whole group up there when you look at Grace [Pehle], Mah [Massey] and Emma [Masterson]. They are just competitive as they come.”

This type of play allowed the Indians to go on a 18-0 run after being down 4-0 in the first quarter to Poplar Bluff.

Freshman Madison Lambert was able to ignite the run with her lone points of the game off a shot from beyond the arc to tie the contest at 4-4.

“We thought if we could keep [the game] kind of compact, and even though we were keeping it compact we thought that played to our advantage because we had to make them pass through tight windows,” Coach Abernathy said. “Then we could use our active hands, and sometimes when you get real spread out it can actually make driving and passing a little easier.”

The Indians answered the run with an 8-0 run of their own as Mayfield got the ball to junior forward Mik Liley following her second-straight steal.

This gave Jackson a 33-21 lead with under two minutes to go in the third, but this deficit did not hold the Mules from answering with a 7-0 run to make it 33-28.

Scoring five of the seven points was sophomore Kiley Bess, who finished with 12 points along with senior Doni Everts.

The Indians were able to hold onto the lead in the fourth quarter as they finished the game on a 7-0 run.

Jackson now heads to the Class 5 Sectionals where the Indians will take on District 2 Champion Hazelwood Central at 6 p.m. tonight at Jefferson College.