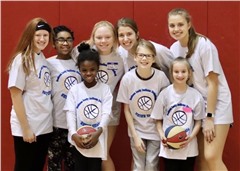 Last month was officially the season of giving, and even though players from the Jackson girls basketball team were on winter break the last two weeks, this did not stop them from giving back to their community.

The Indians hosted the team’s First Annual SHINE Clinic on Saturday, Dec. 28, where players spent three hours running basketball drills and decorating sugar cookies with Jackson students who have disabilities to shine at basketball and have a good time.

Junior Kate Emmendorfer was the player who came up with the idea of this event. She helps run the Special Olympics at Jackson with her mother, who is the school’s assistant superintendent Dr. Beth Emmendorfer.

“I was talking with my mom about how impacting that experience was, and I was like, ‘We need to give those kids something like that, but not just that one time of the year opportunity,’” Kate said. “I said, ‘Why don’t we use the platform of basketball to do that?’ Those kids love to be active and our girls are so good with them.”

Emmendorfer presented her idea to Jackson’s assistant coach Kristen Gautier in October, who immediately made it her priority to make this event become a reality. Coach Gautier was also adamant that the clinic was free for attendees because most camps tend to cost a lot of money.

“I was at the conference tournament for volleyball when she called me,” Coach Gautier said. “I was running around the gym because I was so excited. I’ve never been more proud of a group of girls because they do have a good heart and are always giving back.”

The families of children with special needs already put money towards therapy and among other things, so they may not have enough extra cash to send their child to a camp like this.

“I just kept asking [for donations], and that’s not something I’m good at,” Coach Gautier laughed. “I always feel really bad asking for money, but I knew this was something that needed to happen, and it was going to be great. I think it’s going to be great for years to come.”

Even though the clinic was not mandatory for players to attend and help out with, all but two members of the team showed up. Emmendorfer was impressed by this especially because younger players may not participate in something that is not on the team’s schedule.

“I think we are all best friends, so whether we were in the gym together or not, we would be together regardless,” Emmendorfer said. “We all have servant hearts I would say, so we’re all committed to the team, but we’re also committed to using our platform for good. Not only for playing basketball and getting better as athletes, but just getting better as people.”

This clinic was something that hit close to home for senior Piper Guilliams since one of her younger cousins has Opitz syndrome and was in the area over the holidays. While Guilliams was able to spend a lot of time with her cousin during break, she was also thrilled to make memories with the children at this year’s camp.

“One of the little girls at the end [of the clinic] said, ‘I’m going to this every year,’” Guilliams said. “She was so excited about it and loved it. It was just so much fun to see the joy they had getting to hang out with us especially when we did the autographs. We’re just high school players, and they thought we were superstars.”

Guilliams was also the person who designed the SHINE Clinic T-shirts created by CS Printing Inc, which was closed for the holidays but did a rush order to have the shirts ready for the camp.

What Guilliams and the rest of her teammates signed for each camp member were posters with portraits of every varsity player along with the schedule, which Jackson head coach Tyler Abernathy suggested might have been the highlight of the day.

“There was one kid that lost his, and he was distraught about it,” Coach Abernathy said. “We had an extra one, so it worked out really, really well. When their parents came to pick them up, that was the first thing they showed them.”

The clinic began at 9 a.m. in the morning as players along with Jackson’s coaches helped attendees stretch and warm up for the first portion of the clinic, which was basketball drills. Each participant went through stations that consisted of passing, dribbling and shooting.

Guilliams noted that most of the children had never even touched a basketball yet in their life, so those students used volleyballs and tennis balls instead. She and the rest of the team were worried if all the kids would be able do the drills, so it made for a challenge but one that paid off in the end.

Also in attendance to help out with the camp were members from Jackson’s Shine Club, who the children were familiar with since they had worked with them before.

The priority of the event was not making sure the kids were doing everything exactly right, but instead to create relationships throughout the day.

After 90 minutes of being on the court in the Event Center, the camp was moved outside of the gym and into the sitting area of the cafeteria, where the creating of icing and decorating of sugar cookies commenced.

Everyone agreed this was the most fun and most interesting part of the camp because of all the different shades of colors used for the icing, while the attendee who was with Guilliams made her a unique cookie.

“One of the little girls I helped out with made a thing of icing and squirted the whole thing on her cookie and a whole container of sprinkles on it,” Guilliams said. “She didn’t want to eat it — she made me eat it.”

Guilliams said she did not stop smiling for the rest of the day after the camp since she had so much fun. When Guilliams’ parents asked her how everything went, she replied, “That was the best thing ever. One of the little girls was like, ‘I want to play basketball now.’ It was such a good feeling.”

The best part of the camp for Emmendorfer was when one of the attendees, who said he was not excited to play basketball at the beginning, was looking at the team’s schedule after the camp to see what games he could attend.

“Even if we can just change a little bit about them from when they walk in to when they leave — I couldn’t stop smiling like Piper,” Emmendorfer said. “I called my mom immediately after, and we talked for an hour about how awesome it was.”

Jackson had a total of 23 participants in the inaugural clinic, and Emmendorfer is looking forward to returning in the future to see how many more participants there will be. “Coming back in five years and seeing five times the kids here is going to be awesome.”