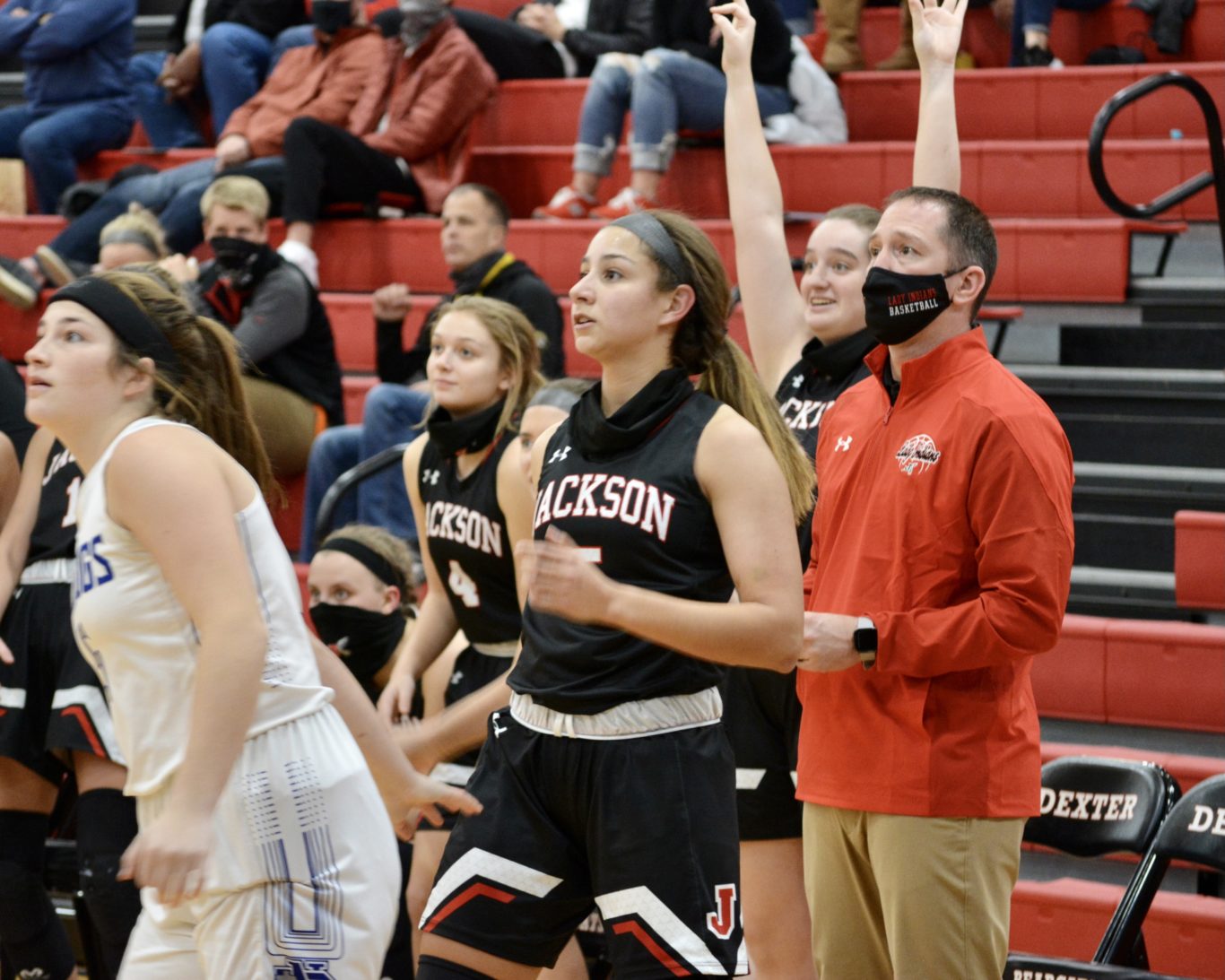 Following a 19-point loss at the hands of Class 6 No. 10 ranked Marquette on Jan. 8, the Jackson girls basketball team went undefeated in both of its games last week.

The first victory was a low-scoring affair over SEMO Conference opponent Cape Central, 36-25, at home Thursday to improve to 2-1 in conference action.

Lastly on Saturday, the Indians held their sixth annual showcase and took on Class 5 North County, which entered the matchup with only one loss on its resume. Jackson was able to advance to 10-4 on the year with a 57-53 win in a game where the Indians led by as many as 14 points.

The Indians were able to take such a prominent lead after going on a 13-0 run to start the second quarter as their junior Jordyn “Jo” McClellan recorded the first eight points of said run.

McClellan finished the game tied with fellow Indian senior Madison Lambert as the leading scorer with 18 points apiece. Along with combining for 36 points on the scoreboard, Lambert and McClellan also knocked down seven of Jackson’s nine 3-pointers with four and three threes, respectively.

This was Lambert and McClellan’s largest scoring combination of the season so far — breaking their previous mark of 35 points against Parkway North. In that one, Lambert produced 19 points and McClellan 16 as they totaled five makes from beyond the arc.

“Lambert is a really good basketball player — really good players have really big moments, and that’s what Maddy does,” Jackson head coach Tyler Abernathy said. “Jo is the same way. In the early part of the game, Jo changes what you do because she just lights it up. Then she handles the ball well, so you really can’t pressure us that much. If you don’t turn it over on the inbound pass, you’re going to foul us.”

Outside of Lambert and McClellan, senior Olivia Ward and sophomore Katie Waller combined for 12 points with six apiece as Ward hit Jackson’s other two 3-point shots.

Against the Raiders, the Indians were tasked with facing a team that features two players over six-foot-tall in junior Kamryn Winch and sophomore Lainey Calkins, who stand at 6-foot-3 and 6-foot-2, respectively.

These players, along with junior Tyler Conkright, are familiar faces to McClellan since they all play together on SEMO Sizzle during the summer.

Winch and Calkins only combined for 10 points with Winch producing seven, while Conkright only had three points heading into the fourth quarter. However, Conkright finished tied for a team-high 11 points after hitting two triples and sinking both of her free throws in the final eight minutes.

One reason why Calkins and Winch’s performances offensively were not so great is because both players were in early foul trouble as Winch recorded two alone in the first quarter. Calkins scored her three points in the first eight minutes, while Winch had six in the third to help make it a five-point game at 37-32.

The reason Jackson was able to have success against North County’s bigs was because of the Indians positioning on defense. Players like Lambert (5-10) and fellow seniors Kate Emmendorfer (5-9) and Hannah Shinn (5-11) were tasked with defending the post, and they did so by not letting Calkins or Winch get close enough to the basket for an easy score.

“Honestly, positioning is all we talked about yesterday in practice, and that’s all we talked about today in our walk through,” Coach Abernathy said. “We knew we weren’t going to be able to be more physical with them because not only are [Calkins and Winch] big, but they’re strong. They’re not just tall kids — they’re big kids, so our positioning had to be our best defense.

“Honestly what worries you about them the most is you do everything right, but you’re in a bad position, so when the shot goes up, you can’t keep them off the glass. That hurt us some at the end when it got a little chaotic. If it would’ve been like that for four quarters, I would’ve had to ask people in the stands to dress out.”

This forced North County to resort to being guard heavy on the court as Conkright, senior Ella Grant, sophomore Paris Larkin, junior Hanna Politte and senior Emily Veach saw the floor for a majority of the fourth.

Politte tied Conkright for North County’s high in scoring with 11 points as she made two triples of her own. Grant finished second in scoring with eight points as Veach paced her at seven, all of which she scored in the first quarter of action.

“As the game went on, we felt like we made them adjust to us, which gave us some advantages,” Coach Abernathy said. “I’ve watched them play quite a bit, and they had some lineups out there that they don’t play with a whole lot.”

Jackson got into foul trouble as well as McClellan and senior Brooke Thompson fouled out of the contest in the fourth quarter. Both teams were in the double bonus as North County finished the game 11-of-21 (52%) at the free-throw line, while the Indians went 14-of-27 (51%).

Jackson will now face Notre Dame for the third and final time tomorrow night in the Dawg Pound as the Indians have not been able to best Notre Dame since Jan. 17, 2019, at 44-42. Since then, the Bulldogs have beaten Jackson in the last five meetings by a combined score of 245 to 164.

However, Notre Dame only defeated the Indians by eight points, 40-32, the last time they played, which was for the 25th Annual Holiday Classic Championship on Dec. 22. This game was the first time Jackson had both Lambert and McClellan on the court at the same time since the Indians last beat the Bulldogs in 2019.

“I feel like we’re playing well,” Coach Abernathy said. “We’ve beaten some good teams in the last couple weeks, so I feel really good about that.

“… I want them to go into Notre Dame and play hard.  Play loose and just enjoy it. I don’t know what the fan restriction is, but it’ll be a good environment, and we’ll just go get after it and see what happens.”

After playing Notre Dame, Jackson will compete in the 40th Annual Hillsboro Invitational as the No. 1 seed with Central being seeded No. 2.