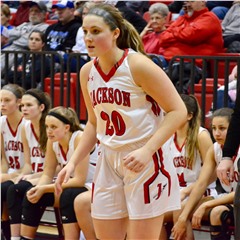 Until the seventh-place game of this year’s Lindbergh Tournament, the Jackson girls basketball team had not won a game since Jan. 18 when the Indians defeated Cor Jesu 56-39 at the Event Center.

Since then, Jackson has fallen to SEMO Conference opponent Cape Notre Dame 50-27 and Webster Groves 41-34 in regular-season action, while falling to Marquette 52-32 and Francis Howell 40-37 in the first two rounds of the Lindbergh tourney.

The Indians faced off against McCluer North in the final round at Lindbergh, and they came away with a 15-point, 47-32 victory over the Stars to finish seventh in the tournament.

Jackson was led by its only returning starter from last senior in junior Madison Lambert, who knocked down a game-high five 3-pointers to lead all scorers with 21 points. Lambert was paced by fellow juniors Olivia Ward and Brooke Thompson, who finished with nine and seven points respectively.

Thompson and Ward each recorded a make from beyond the arc of their own, while junior Kate Emmendorfer also hit a triple for her only points of the contest. The other two Indians to score were freshman Katie Waller with three points and senior Piper Guilliams who had two.

McCluer North also had only one player record double digits in the scoring column as Kiera Sutton finished with 10 points and hit two 3-pointers. Pacing Sutton in scoring was Faith Atkins, who finished with eight points.

Jackson went on a 5-0 run to start the game, which was where Thompson recorded five of her seven points. The Indians used another run in the third quarter to take a 29-20 lead over McCluer.

The Indians broke away with a 45-29 lead midway through the fourth and final quarter, thanks to a 6-0 run. During this run is when Ward made, arguably, the play of the game as she recorded a steal off her own block, drove down the court for a layup and also drew a foul for the and-1 shot to convert a 3-point play.

This was the final regular-season tournament for Jackson, which now has nine games left on the schedule before the Indians try to defend their three-year reign as Class 5 District 1 Champions.

Jackson’s next game will be against conference and district foe Poplar Bluff (10-7, 2-0 SEMO) on the road Thursday, which the Indians (10-7, 2-1) defeated 45-35 in the conference tournament.