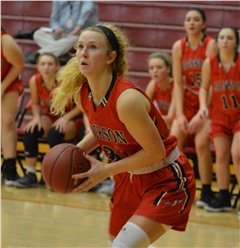 For the second-straight tournament, the Jackson girls basketball team was upset in the semifinals and had to play for third-place instead of in the championship game.

The Indians were seeded second in the Lindbergh Tournament behind No. 1 Kirkwood, but they fell to No. 3 seed MICDS 52-44 on day two.

“This is the best tournament we’ve been in a couple years,” Jackson head coach Tyler Abernathy said. “We fell short to MICDS, but this tournament challenges us not just physically but mentally. For us it’s a quick turnaround to come up, drive home and 13 to 14 hours later you’re back up playing again.”

“We’re an oddly good free-throw shooting team,” Coach Abernathy said. “Sometimes I don’t know if we’re going to make any, and one thing with this group is I think they’re really competitive kids and have the tendency to make free throws in big situations. That’s what they’ve done all year.”

Going 5-of-7 from the free-throw line was senior Kalli Mayfield, and she finished with a team-high 13 points. Sophomore Madison Lambert paced Mayfield with 11 points off three 3-pointers.

Leading all scorers in the contest was Marquette sophomore Kennedi Watkins, who finished with 23 points but went 1-of-10 at the free-throw line.

One reason for Watkins’ success in the paint was the fact that Jackson was without senior Alexis Allstun for most of the game, and she even fouled out in the fourth quarter. Allstun, who scored two points in the third quarter, recorded her first two fouls in the first half and her next two in the third.

It only took Allstun 25 seconds to record her fifth and final foul of the game in the fourth quarter.

“I thought there were some touch calls — it was just two big kids banging, but you have to play for this,” Coach Abernathy said. “I told them after the game, ‘That’s a big game for us to have to learn from.’ You never know when things are going to go your way or not, so being able to learn from it now instead of at districts is a good learning experience for us.”

The Indians made a total of six 3-pointers against the Mustangs as players were able to get open in the passing game.

Jackson freshman Jordyn McClellan hit two shots from beyond the arc and finished with nine points. Sophomore Olivia Ward had the fifth and final 3-pointer while coming up with seven points off the bench for the Indians.

“We still have another level to go as a team, which is being able to knock down shots consistently,” Abernathy said. “Part of that is taking good shots — not just taking 3s but taking good 3s. Once we start figuring that out, which I think we’re getting better at game after game, offensively we will be really hard to guard.”

Filling the post for a majority of the game in place of Allstun was senior Mikala “Mik” Liley, who put up eight points in the third-place game. She was also the only Indian named to this year’s Lindbergh all-tournament team.

“It felt like [Mik] had every rebound,” Abernathy said. “You also have to give [Lambert] a lot of credit. She’s not the biggest jumper or the biggest body, but she’s competitive and she’ll battle in there. Those two on the glass were just phenomenal.”

Jackson now only has eight more games on its regular-season schedule and is undefeated in SEMO Conference play. The Indians recently defeated Cape Notre Dame 44-42 with two more conference wins over Cape Central 67-41 and Kennett 59-18.

“I feel great [heading into the rest of conference play],” Coach Abernathy said. “Last year, I didn’t feel real great coming out of this game — now I feel great. I feel good with where we are at. We’re practicing well, we’re playing well, and we’re playing hard.”