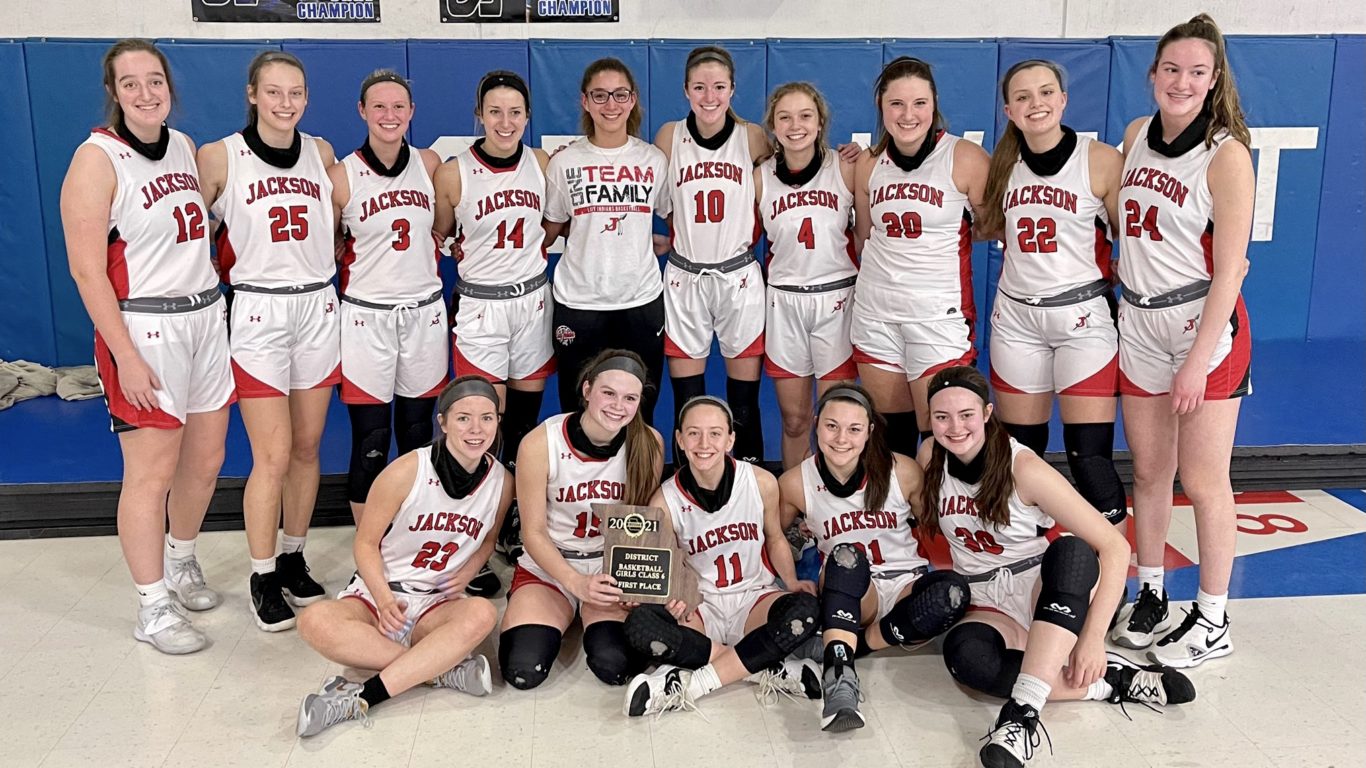 After falling to Poplar Bluff in last year’s Class 5 District 1 Championship, the Jackson girls basketball team found itself back on top of the mountain after winning the first-ever Class 6 District 1 Tournament last week.

The No. 1 seeded Indians (20-6) did so by outscoring their two opponents 104-47 as they won the district championship game over No. 2 Northwest (11-13) 61-29. Jackson was even without its leading scorer junior Jordyn “Jo” McClellan against the Lions for the title Thursday.

The Indians had no trouble reaching the district finals as they beat No. 4 Poplar Bluff (3-17) 43-18, which is a team that ended the regular season on a six-game losing streak.

“We just played really well defensively,” Jackson head coach Tyler Abernathy said. “I felt like we were able to impose our will pretty early in both games on the defensive end. Then offensively, we were able to create some turnovers, which allowed us to get out in transition.”

Stepping up offensively to no one’s surprise was senior Madison Lambert as she produced a game and season-high 29 points in the title game. The Missouri Baptist signee was paced by sophomore Kamryn Link in the scoring column as Link finished with 11 points.

“[Lambert] played great,” Coach Abernathy said. “What’s most impressive is she played well especially offensively at all three levels. She was able to get to the free-throw line and post touches to score inside the painted area. That allowed her to have a little more space, and she knocked down some at the end of the game.”

Performances like Link’s have been crucial for the Indians success this season as fellow sophomore Katie Waller has become one of Jackson’s top pieces on offense the last part of this season. In the final two rounds of the Hillsboro Invitational the Indians won in late January, Waller
combined for 23 points as she finished with a game-high 15 in the championship game.

In the district semifinals against Poplar Bluff, Waller scored a game-high 19 points and hit four 3-pointers. Waller hit another three versus Northwest to help Jackson claim its fourth district title in the last five years.

“I think one of the things I’m proudest about during this season is it felt like every time we have lost a kid for whatever reason, we’ve had other kids step up,” Coach Abernathy said. “Obviously when Jo goes out, you lose some scoring. Well then Kamryn steps up and has 11 — that’s a really good night.

“All year long that has happened. Kid goes down and you put another kid in there, or maybe a kid off the bench gets a few more minutes than normal. Then they’ve been able to respond and perform well in those situations.”

This was the second-straight time the Indians weren’t able to have McClellan play in the district finals as she missed all of last season with an ACL tear. Jackson lost last year’s district title game to Poplar Bluff 49-44, which had current Saint Louis Billiken Kiley Bess leading the way.

McClellan, who fields an offer from Murray State, didn’t play in this year’s district final due to a minor head injury she suffered earlier in the week. Coach Abernathy believed it was best for McClellan to sit out so she could be ready for the state playoffs this week.

It was the right move as there was no need to risk further injury to McClellan since Jackson won the district final by 32 points. Before the game, Abernathy said he could tell his players were anxious to win.

“It didn’t really matter who we played, they were just ready to play and ready to compete,” Coach Abernathy recalled. “You could tell right away.”

Abernathy is hopeful that McClellan will return for this week’s sectional as Jackson will host Cor Jesu (14-12) tonight at the Event Center.

“We and Cor Jesu are both pretty evenly matched — we play them every year,” Coach Abernathy said. “Last year, we won 56-39 at our place, and they bring back just about everybody from last year.

“They’ve got a couple kids who are really good offensively. Defensively, they do a great job of keeping you in front of them and making you move the ball from side-to-side. You don’t get a lot of easy baskets against them, and they don’t turn the ball over much.”