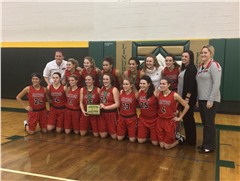 Stafford hit three 3-pointers with fellow senior Abby Hermann also making a shot from beyond the arc in the first half to lead MICDS heading into the second half.

With the Indians up by eight points over the Rams to start the third quarter, Jackson only scored four points in the quarter to allow MICDS to take a 32-31 lead.

“We struggled a little bit early, but you’ve got to give [MICDS] a lot of credit,” head coach Tyler Abernathy said. “We talked about it at halftime — I just thought they contested a lot harder early. We missed a few and got a little gun shy, but we didn’t panic. We kept defending, we kept doing good things and I was really proud of that. That’s what great teams do — they are long and they are not easy to get quality shots against. We kept guarding during that rough stretch, which allowed us to keep the lead [until the final minute of the third quarter].”

After Jackson got within two points of MICDS at 36-34 in the fourth quarter,  Coach Abernathy called a timeout.
Following the timeout is when senior Randa Norman had the type of game-changing effort Coach Abernathy thinks was one of the major keys for his team to win the game and the tournament.

“[Norman] is as hard a worker and player as you’re going to find,” Coach Abernathy said. “I mean, she is everywhere, and it’s absolutely enjoyable to watch. Her offensive rebounds in the fourth quarter — they probably won us the game. They got us so many extra possessions. It felt like every time we missed [a shot], she got it.”

Norman had a total of five offensive rebounds in the second half and also had one steal.

Norman’s final offensive board of the game was turned into three points off a 3-pointer from Stafford allowing Jackson to take a 41-38 lead with under three minutes left in the game.

MICDS scored its final point of the game when junior guard Landys Hughes made one of her two free-throw attempts. After that, Jackson recorded six defensive rebounds in the final two minutes to help maintain its lead.

The Indians also made seven of their final eight free-throw shots in those final two minutes to ultimately extend their lead to 48-39, which ended up being the final score of the game.

“For us, and we talk about it all the time, it’s just about getting better every day,” Coach Abernathy said. “I was so excited in this tournament because when you look at the bracket — if it went out the way I wanted it to go, we would be playing MICDS. Not only is that a phenomenal team, but they are the kind of team we need to play against because they are going to press you full court the whole game.”

Coach Abernathy continued to say when playing a team like MICDS, it makes his team better because of how contested his players were throughout the game.

After the Rams got possession of the ball to start the game and went up 1-0 over Jackson, the Indians inbounded the ball and MICDS implemented the full-court press.

This type of defense is usually used in end-of-the-game type situations when teams that are trying to regain the lead in a close contest.

Following the first quarter of play, the game was tied 13 all.

“What I think happened is that we executed in press offense, and we hurt them a little bit,” Coach Abernathy said. “Then they got out of [their full-court press defense] in the second quarter, and by us handling it, it’s like it gave us confidence. We were able to make a few shots, and when you start making a few shots and getting some stops, you get a little momentum and there you go. [In the second quarter], we handled the pressure really well in the first three or four minutes and got some layups off it and did some good things.”

This allowed Jackson’s offense to go on a 12-0 scoring run at the beginning of the second quarter, which was propelled by senior Nikki Sotak who had one steal, one rebound and one assist leading to a 3-pointer by none other than Stafford.

Stafford, Hermann and sophomore Alexis Allstun were all named to the Lindbergh all-tournament team following the game.

Jackson is now 14-3 overall after playing in its final regular-season tournament, and now has a total of eight games, four home and four away, left before the start of the Class 4 District 1 Tournament.

The Indians failed to win last year’s district tournament when they lost to Fox 48-38 in the championship game, but the team has managed to win three in the last five seasons under Coach Abernathy.