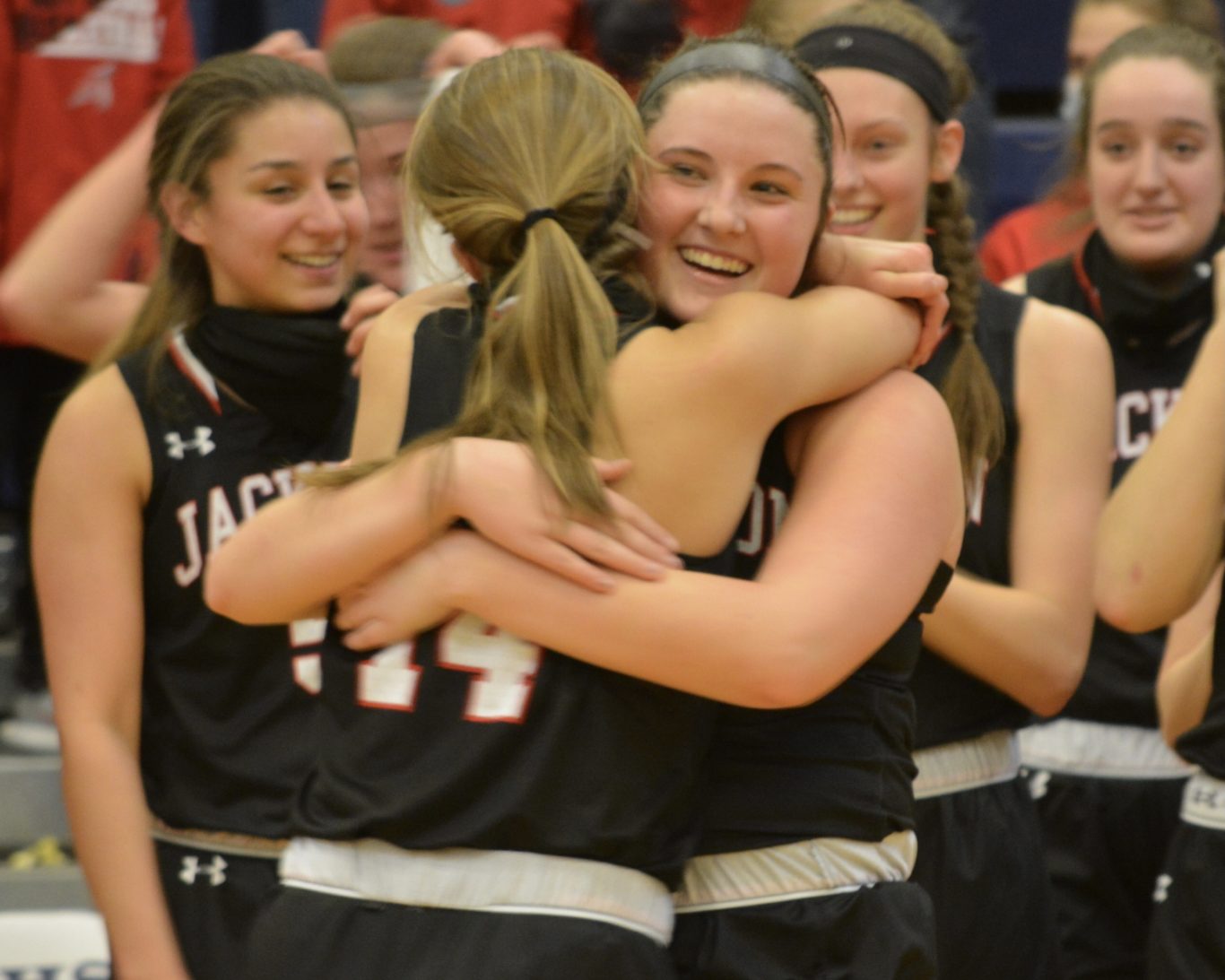 After a 15-day break from playing any games due to inclement weather, the Jackson girls basketball had one of its six seniors accomplish a feat only five other players in program history have ever achieved — score 1,000 points in their career.

Becoming the sixth-ever Jackson Indian to score 1,000 points was Missouri Baptist signee Madison Lambert, who did so in a 51-46 road win over SEMO Conference opponent Saxony Lutheran Friday night. Lambert only needed eight points to reach the mark and did so in the first half with a little over two minutes left before halftime.

Right after Lambert scored her 1,000th point, Jackson head coach Tyler Abernathy had the game stopped in order for the moment to be properly celebrated.

“I remember being like, ‘I’m going to score 1,000 points in high school,’ because I remember going to the games when someone did and everyone being so excited,” Lambert said. “As a little kid you’re like, ‘I want that,’ so it’s just surreal to actually have that moment.”

Heading into the contest, Lambert said she was nervous but not only because of how close she was to reaching the mark, but Lambert insisted she’s nervous before every game because she always wants to perform well.

Against the Crusaders, Lambert scored four points in the first quarter and then made back-to-back free-throw attempts in order to be only two points away. She scored her two points on an offensive rebound.

“I remember I made my two free throws and was like, ‘OK, I made my free throw,’ and then I made another one,” Lambert recalled. “I thought, ‘Oh yeah! I’m going on a roll,’ and then I made it and went, ‘Whoa, I made it!’ Then everyone was going crazy, and I was just so excited because my whole family came out and all my teammates were so excited. In the moment, it was amazing. One of the best feelings ever.”

Lambert only scored two more points in the second half after reaching 1,000 points to finish with 10, but fellow Indian junior Jordyn “Jo” McClellan produced six in the final 16 minutes to finish with a game-high 12 points.

Lambert is currently the second leading scorer for Jackson behind McClellan as the two have combined for 30-plus points in a single game on multiple occasions.

McClellan missed all of last season with a torn ACL as Lambert ended being the Indians leading scorer by averaging 16.2 points per game. Lambert became a full-time starter for Jackson her sophomore year and played in all 26 games as a freshman.

“She’s such a good shooter and is consistent,” Coach Abernathy said. “She’s just a phenomenal kid and phenomenal player, and that’s shown by being the sixth person in school history to score 1,000 points.”

Lambert is the second player under Abernathy to have scored 1,000 career points as the other was 2016 graduate Cassidi Tomsu, who scored 1,379 and is currently Jackson’s third all-time leading scorer behind 1992 graduate Andrea Siemer Marchi (1,610) and 2003 graduate Jenna Leet (1,590).

“Scoring 1,000 points is an amazing feat — it really is,” Abernathy said. “In our program, it’s really hard to do because sometimes a kid may not get that opportunity until they’re a sophomore or junior. You start doing the math, it becomes really hard to get to 1,000 points.”

Lambert has now accomplished two of the goals she set for herself this season as the first was signing to play college basketball and the second was reaching 1,000 points. Now Lambert hopes to follow in the footsteps of a former Indian like Michele in reaching the highly sought after final four.

“I feel like we can go very far. We can do well in districts — I know we can and have a gut feeling, and I’m usually right about that,” Lambert laughed. “I think if we play to what we’re capable of and to our strengths as a team with the one goal, ‘We want to go to state and get to the final four,’ we can probably win it all if we really want to.”