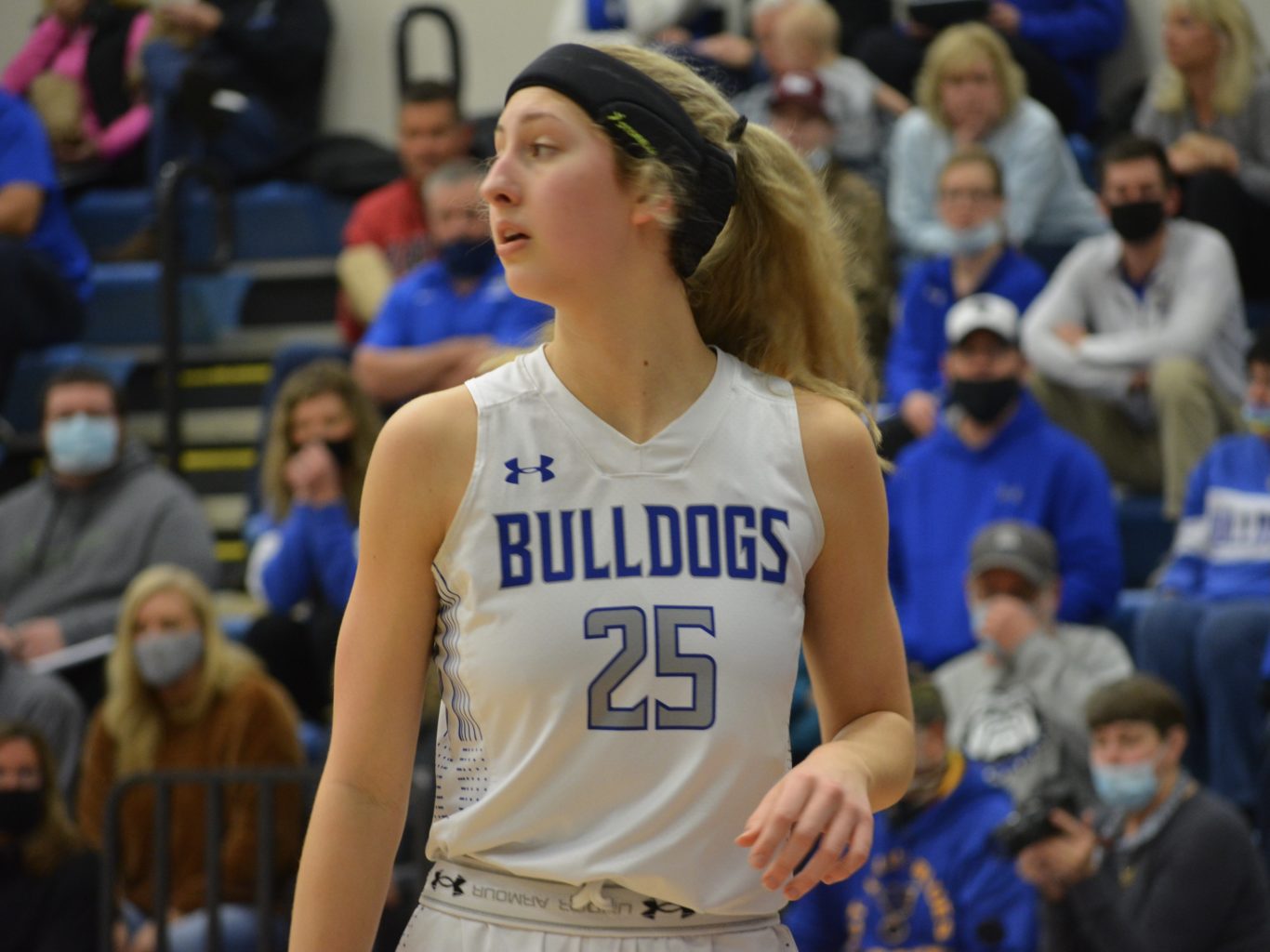 If anyone has ever watched Tori Rubel play basketball, they know she usually does so with a big smile on her face — even during high-pressure moments like when Notre Dame advanced to last season’s Class 4 Final Four.

Helping the Bulldogs advance to state for the first time since 2010 with a grin as a freshman lets people know that hardly anything phases the 6-foot-1 sophomore. Unfortunately due to the coronavirus pandemic, MSHSAA cancelled last year’s Class 4 and 5 Final Four as Rubel and Notre Dame were unable to compete for a state championship.

Now that the world is getting a handle on COVID and high school sports in a majority of America are being played, Rubel and the Bulldogs (15-5) are hoping to make it to the final four once again as they are now in Class 5 and currently ranked No. 9.

To start this season, Notre Dame won seven-straight games en route to taking home the SEMO Conference Tournament and Holiday Classic Championship for the second year in a row. Rubel averaged 14 points, 6.5 rebounds, 2.1 steals and 1.2 3-pointers in those tournaments.

In four of those six tournament games, Rubel finished with 13 or more points and had the second-highest scoring output of the season for Notre Dame with a career-high 22 points. This was in the Bulldogs 50-38 win over New Madrid County Central in the conference semifinals.

“Tori is good at everything,” Notre Dame head coach Kirk Boeller said. “On the court, she knows where she is defensively. She can read passes and gets her hands on all kinds of them. She rebounds as well as anybody we have, and she can shoot. Having somebody like that to pair with the ton of talent we already have makes us that much more tough.”

The only other player on Notre Dame to have scored 20 or more points is Tori’s older sister 6-foot junior Lexi Rubel, who currently has seven 20-point games and missed two contests earlier in the season with an illness [Park Hills Central on Jan. 7 and Helias Catholic Jan. 9].

During the Holiday Classic Championship Dec. 22, something happened that Tori had never experienced before while playing basketball — she fainted. This was because Rubel suffers from low blood pressure, but it has never been an issue in basketball.

Doctors believe Tori caught a virus in December, which has temporarily thrown her system off and made her more sensitive to her low blood pressure. Previously, Rubel had occasional issues during growth spurts but never during activity.

After extensive testing, all specialists have agreed that Rubel’s heart is “super healthy” and that these episodes are not dangerous. Doctors have told Tori that she will grow out of the low blood pressure issue as she gets older. Currently, she is taking several new medications to increase her blood pressure and correct the imbalances caused by the virus.

Rubel now wears a compression headband [pictured above] during games to prevent any major head injuries if she were to pass out again. Tori also had to alter her diet to what she compared to as being a “caveman’s diet.”

“No sugar — well as little as possible,” Rubel said. “Then I’m trying to eat a ton of meat. I have five meals a day, kind of a bodybuilder type of diet. Not a lot of carbs or anything.”

Something else Rubel is doing to prevent from having another episode in a game is wearing compression shorts, and she also stands up and stretches before coming back into the game.

One of the medicines Tori is taking helps keep blood in her vessels because her doctors believe it’s dropping too fast. “I go up and stand to get the blood pumping back in my legs so I’m not just going from sitting to standing really fast again and the blood drops,” Rubel said.

The doctors are optimistic that all the changes Rubel has had to make will be short term as her body gets back to normal, but it’s all worth it to Tori to get to play now.

Rubel missed five-straight games after suffering another episode against Class 6 Cor Jesu Jan. 15. Notre Dame went 2-3 overall without Tori and suffered losses to Class 5 No. 4 ranked Helias Catholic, 47-40, and Cor Jesu, 69-66 in double overtime, as she wasn’t able to finish either game.

“It was so hard [to watch and not play],” Rubel said. “Whenever I saw our team down, I just wanted to get in there, help them out and just play, but I couldn’t. That was really tough. Sitting out during practice was hard, too. I was just ready to play.”

After not playing for 16 days, Rubel was cleared to return after being on her medication for a few days. On Feb. 1, Tori helped Notre Dame defeat Class 5 District 1 opponent Cape Central, 47-33. “When I was cleared, I was so happy — I was just so happy,” Rubel expressed.

Tori said finally hearing her name called in the starting lineup again versus Cape Central was easily the highlight of her day. Rubel admitted to being nervous before the game because she said it reminded her of being a freshman when she started in her first varsity game.

In Notre Dame’s next game on Feb. 4, Rubel and the Bulldogs faced another district opponent in Saxony Lutheran and came out on top 43-35, but she ended up having an episode in the third quarter and didn’t return to the game.

“In the Cape game I felt good, but then against Saxony I got hit in the head, and then I went down,” Rubel said. “Ten minutes after that I was fine and ready to get back in, but they decided to not put me back in.”

Following her episode against Saxony, Notre Dame didn’t play in another game for 19 days due to inclement weather. Rubel said this break was helpful for her since her immune system was down during the sudden burst of episodes, so the time off helped “everything calm down” to where now she feels healthy again.

Even though Rubel and the Bulldogs didn’t play for over two weeks, that didn’t mean Tori was just sitting around at home enjoying the snow. Rubel spent a lot of her time working out with Lexi as they have a basketball goal in their garage with a 3-point and free-throw line spray painted around it.

“Lexi and I did our own workouts at home, so we put plenty of shots up,” Rubel said. “We do some post moves on each other, and we rebound. We have a whole workout we go through, and our dad and grandpa always help us, too. We also ran on the treadmill, so we stayed in shape well. I feel like it was a good little break, and it made us hungrier to get back to playing again.”

Since Tori’s return to the court, she has only played in around 50% of each game. When Rubel first passed out this season in the Holiday Classic title game, it happened in the first half. She then returned in the second half and hit a 3-pointer late in the game that propelled the Bulldogs to defeat Jackson, 40-32, for the championship.

This past week for the first time since the beginning of the season, Rubel played in three-straight games without having an episode. She averaged 8.0 points, 3.0 rebounds, 1.3 assists, 1.0 steal and 1.0 three per game while only playing 42.4% of the time.

“She loves her family, she loves her sisters and she loves basketball,” Coach Boeller said. “For a while there, she didn’t have one of those three things. I know her parents, and I know by the time she was walking she had a ball in her hands, so to see her being able to do something that she loves after having it taken away for a little while — I’m happy as a coach to have her back. As someone who loves and appreciates that family, I’m happy as a person for her to be able to be back.”

In Notre Dame’s first game back from the weather break, Rubel had six points, two rebounds, two assists and one steal while playing in 49.4% of her team’s 60-30 home win over Dexter Feb. 22.

Tori then only played in 42.7% of Notre Dame’s 61-30 home win over Poplar Bluff Thursday, but she produced eight points, four rebounds, two steals, one assist and one block. Rubel didn’t miss a single shot in the game and is currently 65% on two-point attempts while shooting 45% from the 3-point line.

Against Farmington in a 47-32 road win Friday night, Rubel scored double-digit points for the first time since Jan. 7 (12 versus Park Hills Central) as she finished with 10 and hit two 3-pointers. Tori also recorded three rebounds and one assist while only missing one attempt from the field and playing in 35.2% of the game.

With Rubel’s 10 points, this was the first time Tori and Lexi have combined for 30-plus points in a single contest since December as Lexi finished with a game-high 21. Over the past three games, Lexi has averaged 21.3 points, 9.6 rebounds, 4.0 assists and 2.0 steals per game.

The Farmington game was the fourth time The Rubel Duo has combined for 30-plus points this season as the highest total was against NMCC at 33, where Lexi paced Tori’s game-high 22 points with 11. The other times were against Jackson in the conference tournament championship with 31 (Lexi 18, Tori 13), and when they faced Meadow Heights in the Holiday Classic at 31 again (Tori 16, Lexi 15).

Besides Tori’s scoring ability in the post, mid-range game and from beyond the arc, the Bulldogs have missed her presence on defense just as much. Not only is Rubel able to lock down ball handlers one-on-one, but she also allows Notre Dame to apply full-court pressure.

“I think the press really helps us get after it, so we just have to keep that energy up throughout the whole game,” Rubel said. “Everyone relies on everyone, so whenever you have one person missing, there’s a piece of the team missing. Now that everyone is back, we’re ready.”

This week, Notre Dame is playing in the district tournament with hopes of winning a third-straight district title, which the program hasn’t achieved since 2004 when the Bulldogs won eight in a row.

“Even with playing in short spans, I can just put it all out on the court in that short time because if I get tired, I can be tired later,” Rubel said. “It doesn’t matter right now, so I just go out and give it my all because I need to. My coaches really care, and they are trying to ease me back in, but I’m ready. I’ve worked really hard to stay in basketball shape and keep a ball in my hand through all this. I’m ready to help my team win.”