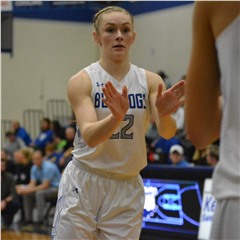 The third time was almost the charm for the Jackson girls basketball team as the Indians took a 17-14 lead over SEMO Conference opponent Cape Notre Dame heading into halftime of last Thursday night’s game at the Event Center.

Two minutes into the third quarter, Notre Dame was able to regain the lead 19-17 after Bulldogs sophomore Lexi Rubel recovered the ball for a steal off her own block. Jackson tied the game back up at 19-19 after two free throws from junior Madison Lambert, but Rubel answered 16 seconds later.

Rubel recorded another steal and dished the ball to senior Riley Burger for two more points to give Notre Dame a 23-19 lead as Lambert scored two more points from free throws after.

Bulldogs senior Emily Kellum answered with two free throws of her own, which ignited a 16-0 run for Notre Dame to take an eventual 39-21 lead over Jackson.

Rubel and junior Delaney Dohogne combined for nine points in the run as Rubel hit a 3-pointer to force Jackson to call a timeout down 30-21 with two minutes, 47 seconds left in the third.

The Indians finally broke the run with a little over seven minutes remaining in the fourth quarter as junior Brooke Thompson hit one of her two free-throw shots.

Thompson tied with fellow junior Olivia Ward for a team-high seven points as Lambert paced them with four. Lambert did not play for most of the first half.

For Notre Dame, Rubel and Kellum each finished tied for a game-high 12 points as Burger paced them with 11 of her own. Sophomore Leah Jansen was the Bulldogs fourth-leading scorer with six points off two triples.

The Indians will return to SEMO Conference action on the road against Poplar Bluff (9-5, 2-0) on Feb. 6 as they are playing in the Lindbergh Flyer Tournament this week.

The Indians won both last year’s conference tournament and regular-season championship, which is what the Bulldogs are on pace to accomplish.