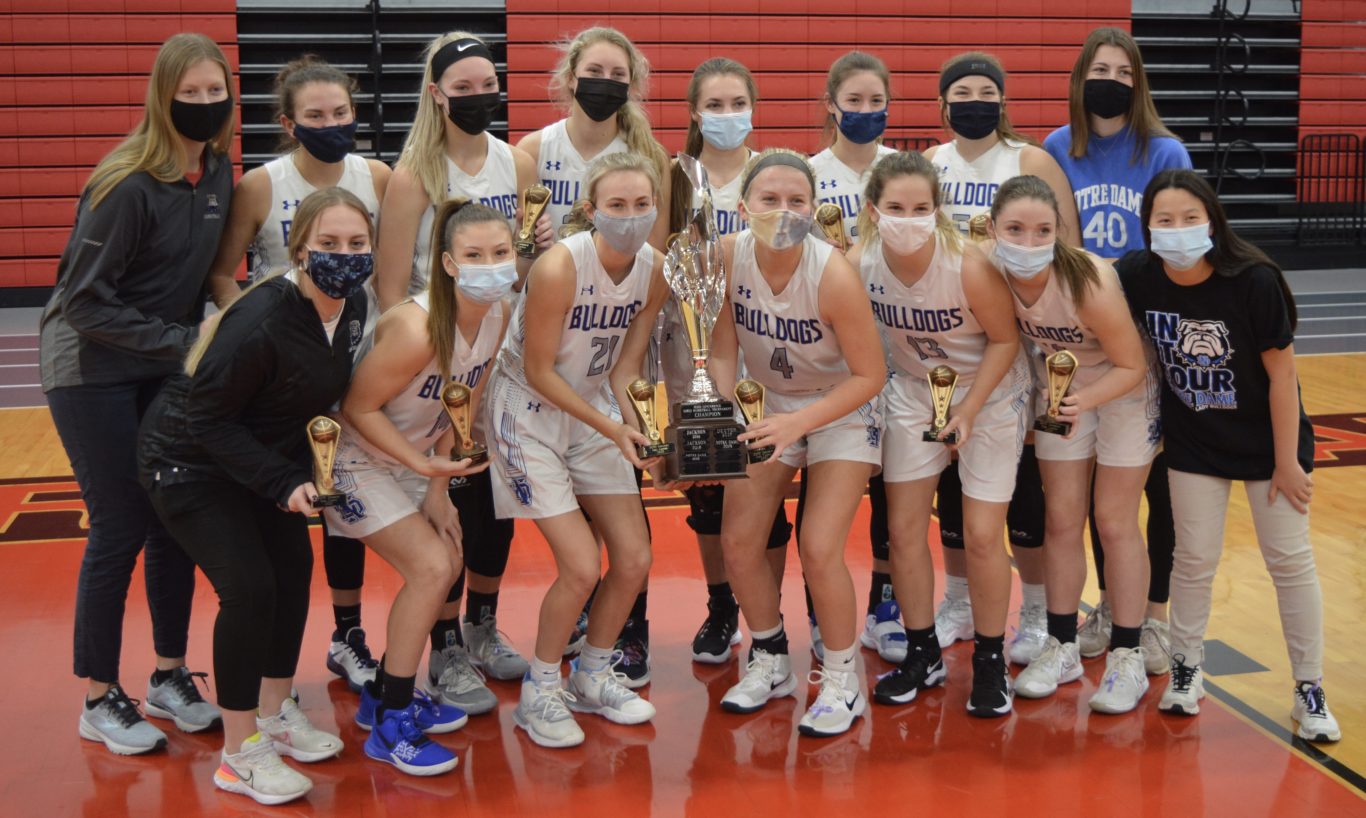 Following a 2019-20 campaign where the Notre Dame girls basketball team only lost four games, the Bulldogs are currently 3-0 overall after winning last week’s SEMO Conference Tournament for the second season in a row.

“We won the tournament using that same make-up that we did last year,” Notre Dame head coach Kirk Boeller said. “We relied on our defense to keep the other team from scoring. I know it sounds dumb, but that’s really what our goal is every game to try to keep them low. My players keep buying into it, so that’s the recipe for what happened.”

The No. 1 seeded Bulldogs returned a total of three starters to the court this season including The Rubel Duo in sisters junior Lexi and sophomore Tori Rubel, who combined for 83 points in the tournament.

Tori Rubel had the highest scoring output between the two with a career-high 22 points (10-for-12 at the field; 83.3%) in Notre Dame’s 50-38 win over No. 4 New Madrid County Central in the semifinals. Lexi Rubel finished with a double-double in that game with 11 points and 11 rebounds while also producing a game-high seven assists for the Bulldogs.

In the championship game against No. 2 seed Jackson Friday night, the Rubels combined for 30-plus points (31) again as Lexi led all scorers with 18 in Notre Dame’s 46-33 win for the program’s second-ever conference tournament title. Lexi Rubel also controlled the boards with a team-high nine rebounds as junior Leah Jansen was the top Bulldog defensively with her game-high eight steals.

Jansen scored four of her points off fast-break opportunities, thanks to her steals as senior Delaney Dohogne created points off of turnovers as well by finishing as Notre Dame’s third-leading scorer with five points.

Dohogne just so happened to be the Bulldogs leading scorer in their season-opening win over Kennett, 61-33, as she finished with 17 points. Coming off the bench in that one, senior Allie Burnett finished as Notre Dame’s third-leading scorer with nine points as she hit three 3-pointers.

“These girls are so good at court awareness,” Coach Boeller said. “They know where they’re supposed to be especially in our press. They sit in those soft spots in the zone, and they’re always in the passing lane for the most part. When you couple that with Leah, Tori and Kristin [Edmonds] being maniacs up on the basketball.

“That lets Delaney, Lexi and Allie [Burnett] get those passes up over top. It’s kind of the perfect storm — one part is really good, and that makes the other part better. It’s fun to watch.”

Pacing Lexi in scoring, of course, was Tori with 13 points of her as she scored eight alone in the third quarter. Lexi scored eight in the third as well, which is where the Bulldogs went on runs of 10-0 and 8-0 against Jackson.

Not only did Notre Dame display its dominance in those runs, but it did so after Indians junior Jordyn “Jo” McClellan hit a three to make it a 6-point game at 31-25. The Rubel Duo gave Notre Dame a 12-point lead as Lexi and Tori hit back-to-back triples, respectively.

McClellan was the only player for Jackson to reach double digits as senior Kate Emmendorfer finished behind Jo with five points, which she scored in the first quarter. One of the Indians returning all-conference and all-district selections senior Olivia Ward was held scoreless until the fourth quarter as she finished with two points.

Jackson was without its leading scorer and rebounder from last season in senior Madison Lambert all of last week. Lambert also missed her team’s season opener against New Madrid, which the Indians lost 63-60.

Through three games, no team has scored 40 or more points against Notre Dame’s defense as the Bulldogs only allowed four teams to score at least 50 points all of last season. Those teams were Earle out of Arkansas (59), Saxony Lutheran (58), Westminster Christian Academy (57) and lastly Poplar Bluff (50).

The Saxony Lutheran Crusaders were seeded No. 7 in this year’s conference tournament, but that was two spots below where they actually finished. The Crusaders won this year’s SEMO Conference Tournament Consolation Championship with a 52-48 win over No. 5 Sikeston on Friday.

Saxony did so with one of the best performances in senior Alice Hogendobler’s career as she scored her career-high 18 points and hit five 3-pointers in the win over the Bulldogs. Hogendobler combined for 32 points with fellow senior Maddox Murphy, who produced 14 of her own and drained two threes.

In the third quarter, the Crusaders were able to go on a 15-0 run as 12 of those points came from 3-pointers by Hogendobler.

On top of her game-high 18 points, Hogendobler also collected a team-high six rebounds as Murphy finished in a three-way tie for second in boards at five with senior Sydney Turner and junior Emma Voelker. First-year starter sophomore Anna Mueller finished as Saxony’s third-leading scorer against Sikeston as she finished with a career-high nine points.

For the Crusaders to reach the fifth-place game against Sikeston, they first defeated No. 6 seed Poplar Bluff 61-32 as Turner scored a career-high 15 points as Murphy scored double digits (10) in that game as well. Turner also recorded a team-high six steals and six rebounds in the win over the Mules.

Saxony started the season with a 59-36 loss to Jackson in the first round of the tournament as Murphy was the only player to finish with 10 points or more at 12.

While the Crusaders are under a new head coach in Lance Tollison, they are also having to replace their top-two scorers from last season in 2020 graduates Emma Brune and Olivia Spanley. Brune finished her career as Saxony’s all-time leading scorer (1,902 points) as she averaged 22.6 points per game in her final campaign.

Tollison is currently happy with how the scoring is going since there has been a different leader in each of his team’s four games thus far. The 3-1 Crusaders have this week off before playing two games next week.

“We played good basketball against three solid teams, and we’ll see them all again this season,” Tollison said. “We had good, all-around performances by several people and had some folks off the bench that produced quality minutes, so it was good to get that many games in for one. Then to be successful was kind of a bonus.

“We spread [the scoring] around really well, so that’s what has to happen. We take advantage of who’s hot, who’s open, and they’re gaining confidence to score.”