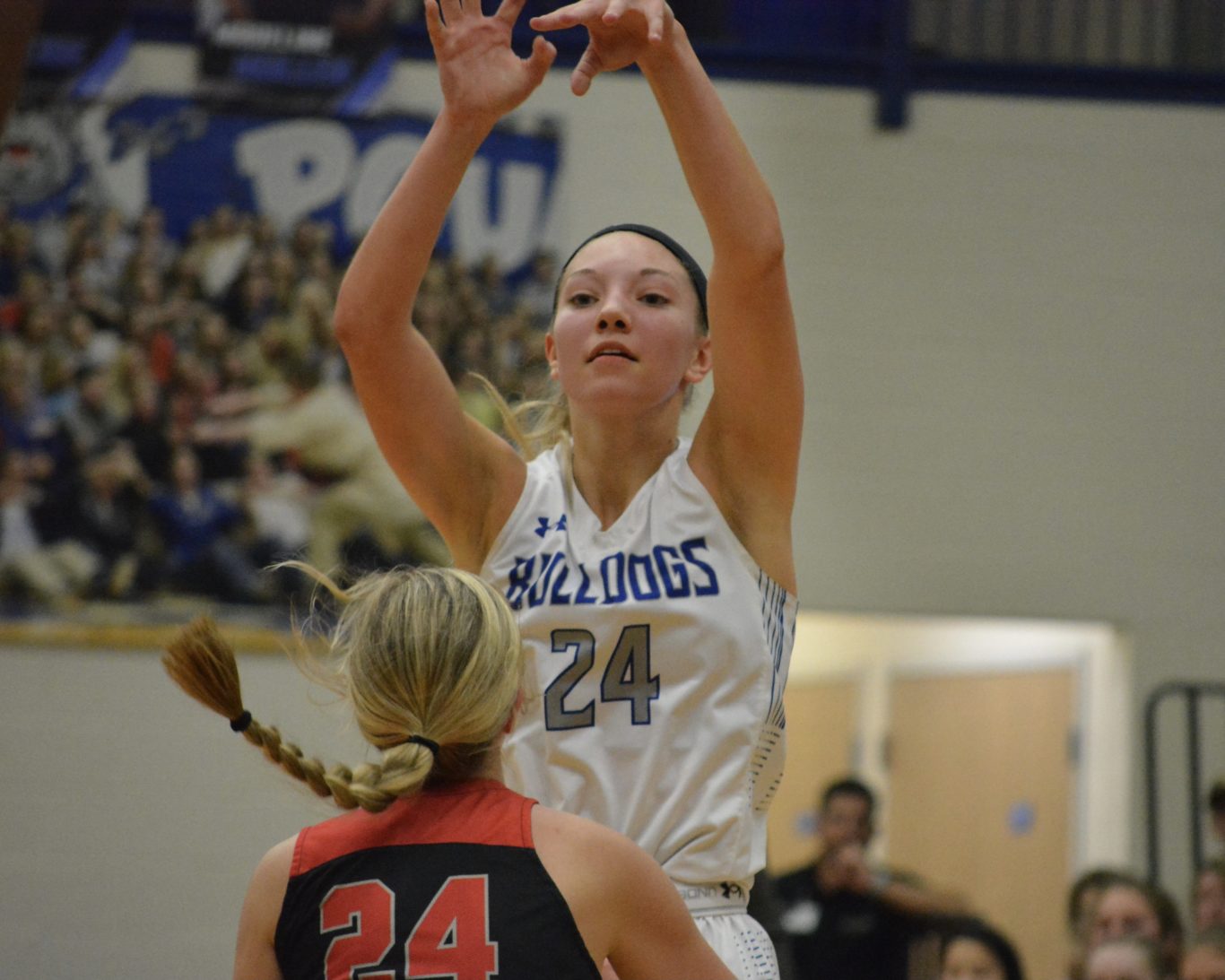 As just a sophomore, Cape Notre Dame girls basketball player Lexi Rubel was selected to the Class 4 All-State team after helping the Bulldogs reach the final four for the first time in 10 years.

The last player in program history to earn all-state honors was Brooke Bohnert, and she was selected to the team as a senior following the 2011-12 season.

This was Rubel’s second-straight year in Notre Dame’s starting lineup as she led the team in categories such as scoring [13.7 points per game], rebounds [8.2 RPG] and assists [3.1 APG]. Out of the 20 overall selections, Rubel was one of the six underclassmen named all-state in Class 4.

“[Being named all-state] felt pretty good,” Rubel said. “I owe a lot of it to my teammates and coaches for always pushing me during practice. They always stay after and work with me. I know all the hard work is paying off.”

Rubel said she enjoys playing in one of the top two classes in the state and is happy that younger players like herself are being recognized. Four other sophomores and one freshman also garnered all-state in C4.

Notre Dame’s second-year head coach Kirk Boeller, who was named one of the Class 4 Coaches of the Year, said he certainly noticed an increase in the amount of work Rubel put in the gym during this past season.

“I was in the gym a lot more [this summer] honestly, and we have a basketball goal in our garage [at home],” Rubel said. “Even now, I’ve been spending a lot more time in the gym.”

Rubel said something she improved on this season was her court vision, and she started looking to pass to her teammates more often for them to be able to score.

Rubel also said she became a much better scorer as she went 46% from the field and finished 69.7% at the free-throw line. She also made 31.4% of her 3-point attempts.

Along with training on her own time, Rubel plays for SEMO Sizzle in the summer. She suffered a knee injury while playing for the team, which luckily was only a severe bone bruise that did not cost her to miss much time.

On top of finishing in the final four, the Bulldogs won a second-straight Class 4 District 1 Championship and also took home the SEMO Conference Tournament Championship for the first time in program history. Notre Dame finished with 20-plus wins for the second year in a row with a record of 25-4.

The Bulldogs also won the First State Community Bank Holiday Classic Championship with a 57-38 win over Jackson, which was the same team they defeated for the conference tournament title.

“We all sat down before this season and wrote down our goals,” Rubel said. “We were just really close, too, and I know sometimes teams have drama. We are all girls so that happens, but we had no drama. Even at school we were all just really close.”

Other returning starters for Notre Dame along with Rubel included seniors Riley Burger and Emily Kellum, who are teammates she attributes to helping her grow as a leader this year.

“Our team chemistry this year was so good — we were all so close,” Rubel said. “It was just easy to step into a leadership role and help get it done. Last year, [Burger and Kellum] helped me feel comfortable with the team. This year, I was more confident, too, so it just made it even better when we brought all the juniors in and Tori and Leah.”

Rubel has been named all-conference and all-district in back-to-back seasons now, and she said her motivation this year was to reach state.

All schools in Missouri were closed for the remainder of the school year last week due to the COVID-19 pandemic. Coronavirus is also what kept Rubel and Notre Dame from being able to compete for a state championship since the Class 4 and 5 Final Fours were canceled.

Rubel is using her time wisely by not only improving her game on the court but also spending time with her family, including her two other younger sisters, Brie and Kate.

“My sisters and I have been playing two-on-two and just shoot and rebound for each other,” Rubel said. “We’re all super close, but we all get really busy, so we don’t get to see each other as much. It’s really nice right now just getting to spend a lot of time with them.”

Rubel said having Tori on the team this season made a significant difference in her play because Tori was a calming presence for her. “If I mess up or something, she’s like, ‘You’re good! You got it.’ She feels the same pressures that I do, and we kind of take those off each other.”

In the playoffs, Notre Dame won each game by 11 points or more and defeated each district opponent by at least 20 including a 52-32 victory over Ste. Genevieve (25-2) for the district title. The Bulldogs defeated Rockwood Summit 55-35 in the quarterfinals to finish in the final four.

“At the end of the year, I feel like we were playing the best basketball that we’ve ever played,” Rubel said. “It all started with our defense because even if we weren’t knocking down shots and the momentum started going, we’d get steals, and it all just took off from there.”

The Bulldogs defense only allowed four teams to score at least 50 or more points against them this season as two were SEMO Conference opponents. Notre Dame allowed 50-plus points to Saxony Lutheran in a 73-58 win but later fell to Poplar Bluff 50-47 for the Mules to come away with the regular-season conference title.

“Anybody can beat anybody [in the SEMO Conference],” Rubel said. “I think some of the best offensive players — it was pretty obvious — were Emma Brune, Kiley Bess and Madison Lambert. They’re all just such good, natural scorers.”

With two more years left at Notre Dame, Rubel is excited with all of the talent the program returns in hopes of reaching the final four once again. Rubel has already received two offers to play college basketball — one from reigning Ohio Valley Conference Tournament Champions Southeast Missouri State and Southern Illinois.

Rubel is currently focused on improving her mid-range game as well as ball handling. Even though she was a leader as a sophomore, Rubel wants to become even more of a vocal leader as a junior.