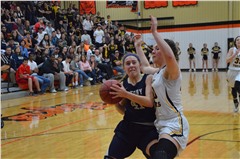 Before this season began for the Saxony Lutheran girls basketball team, the team entered the year as the reigning four-time Class 3 District 2 Champions.

Due to graduation, though, the Crusaders lost a total of eight players who had been pivotal to the team’s recent success and even advancing to last year’s Class 3 State Championship game.

Heading into the season, head coach Sam Sides did not quite know what to expect from this year’s team since all the players on it had mostly seen minutes on the junior varsity team.

Despite that fact, Coach Sides still thought they would be able to contend for a district championship.

In the last three district championship games before this year’s, Saxony has faced Arcadia Valley and come out on top to go on to the state playoffs.

The story remained the same on the night of Thursday, Feb. 23, at Clearwater High School since the Crusaders defeated the Tigers 72-47.

“One of their best players was kind of banged up with a knee injury — Briar Johnson, and she’s a heck of a player,” Coach Sides said. “We tried to get control and played at a faster pace that they wanted to play, and we turned them over a few times. I tell you what, they played hard, we played hard — it was a great game. We shot the ball better than we normally do, which gave us a little cushion.”

Offensively, junior guard Laurel Mueller, who scored 23 points in the tournament entering the game, put up 19 points in the first half and finished with a game-high 24.

Thirteen of Mueller’s points came in the second quarter, which she started off by sinking a 3-point shot to put Saxony up over Arcadia Valley 17-8.

In the first quarter, though,  the game was a close one at 7-6 with 3:50 remaining until sophomore forward Cassidee Wunderlich came off the bench.

In the span of nearly two minutes, Wunderlich rebounded the ball defensively three times, scored six points and had one steal for Saxony to go up 14-8 after the first quarter of play.

“[Wunderlich] had a big, big game — she really picked us up,” Coach Sides said. “I got on to her a little bit about not blocking out, and it seemed like she just took off. Had several rebounds and made some assists and made some buckets, handled the ball — she did everything. And she’s capable of doing that — she has a lot of talent, but she just has to get more consistent with it. She’s a big pick up.”

With the district championship on the line and the chance to play in the state playoffs, Arcadia Valley came out defending Saxony tightly, which resulted in early turnovers for the Crusaders.

“A lot of that is playing in a district championship game — you are going to be a little excited,” Coach Sides said. “You just have to take a deep breath, calm down and do the basic fundamentals we work on all the time. Getting good angles on your passing and to meet your pass, and sometimes we just stand still. We’ve got to be active all the time on both ends of the floor, and if we do that we are pretty good.”

With much thanks to Mueller’s 13 points in the and Wunderlich’s contributions all over the court, Saxony was able to jump to a 37-19 lead at the end of the second quarter heading into halftime.

Mueller hit another 3-pointer to start the second half when she was wide open and received a pass from junior Courtney Kester.

Mueller scored her final two points off an inbound pass, and soon after is when freshman guard Emma Brune went on a scoring run of her own.

Brune did not manage to score a point in the first half, but hit four 3-pointers in the second, three in just the third quarter, and ended with 15 points in the game.

Brune finished with a total of 46 points in her first district tournament, which is second on Saxony behind Mueller’s 50 points.

“A lot of times with freshman they get overwhelmed, but [Brune] always has a go after it attitude, and she doens’t back off,” Coach Sides said. “In fact, sometimes she takes shots she probably shouldn’t take, but she has no fear — that’s the way I want her to play.

Saxony now enters familiar territory in the Class 3 State Playoffs and will face an opponent in the first round the team already has played, Kennett (16-12). It was the lowest-scoring affair for the Crusaders all season, but they defeated the Indians 34-28.