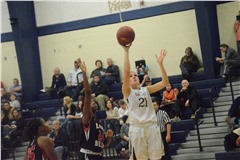 In the 2017 Delta New Year’s Tournament Championship game last Thursday night, the Saxony Lutheran girls basketball team had a chance to take down the undefeated Oran Eagles when junior Masyn McWilliams drew a foul to be able to go to the free-throw line with 0.7 seconds left in a tied game.

Tied at 54-54, McWilliams only had to make one of her free throws to take the lead and ultimately hand Oran its first loss of the season and for Saxony to win the tournament.

McWilliams first shot bounced off the rim, and that was when she rushed to the ball for the rebound not realizing at the moment she still had a second shot attempt before the ball became live.

Frustrated after realizing this, McWilliams went back to the free-throw line to collect herself and get ready for her final shot attempt. She missed the shot, and an Oran defender rebounded the ball for time to run out in the fourth quarter for the game to go into overtime.

Four minutes were put on the clock for one team to come out on top as tournament champions, and the Crusaders had yet another chance to take the lead when both teams were tied with just seconds left.

This time it was junior Addison Beussink at the free-throw line with 13.4 seconds left in overtime after drawing the foul inside the paint following an offensive board with the game tied at 61 all.

Beussink made one of her two free-throw attempts to put Saxony up over the Eagles 62-61, but Oran freshman Kaylee Payne drained a 3-pointer to give her team a two-point lead with just three seconds left in the game.

Saxony head coach Sam Sides, whose birthday happened to be the same day of the game, called a timeout to talk to his team about trying to get a shot off.

Freshman Emma Brune took the inbound pass down the court and tried to get the ball to an open player at the wing, but the clock hit zero as she got the pass off for Oran to remain undefeated and beat Saxony 64-62 to win the Delta New Year’s Tournament.

“We should have won,” Coach Sides said. “We had plenty of opportunities to win in regulation, but we just don’t have quite the courage and nerves to be in these games. Like  I told [my players], we need more of these experiences to get through that because I don’t know how else you do it other than you get in there and you battle every possession.

“If we make a mistake, we drop our heads. Bad things are going to happen, and we let it get to us. We’ve just got to keep playing, but we had plenty of opportunities [to win].”

Oran, which is led by sophomore Leah Cauble who scored a game-high 31 points in the contest, defeated every other opponent it has faced this season by 32 points or more before facing Saxony.

Cauble’s scores did not come with ease since the Crusaders implemented the double team on her throughout the game, but this forced Cauble to draw fouls taking her to the free-throw line in order to score.

Cauble had a total of 20 free-throw attempts in the game and made 16 of them with her other 15 points coming from successful drives to the lane for layups and jumpers from around the field including a 3-pointer.

“We just couldn’t keep [Cauble] in front of us,” Coach Sides said. “We didn’t move our feet — we are not really a good defensive team, and we’ve struggled with that all year. We get a little bit lazy, and we are not in good enough shape to play the whole game.

“First thing that goes is your legs, and you start reaching and grabbing, and we just didn’t get good position. Again, that’s another thing we’ve worked on all year — we are out of position a lot. When you get out of position, you are going to foul, and [Cauble] is hard to guard.”

Beussink, who is Saxony’s center, had eight rebounds on both the offensive and defensive side of the ball making for a game-high 16 total boards.

Even though she scored 12 points in the game, Beussink had a 36 percent field-goal percentage, which was mostly due to her not being able to score after she got the offensive rebound under the net.

“It doesn’t take much to knock [Beussink] off balance, and she couldn’t quite finish,” Coach Sides said. “She’s one that gets a little bit excited and doesn’t quite finish. She is one that needs to have a little more nerve, more force and just have more confidence in herself and finish the play.

“But she’s not the only one; all of them shared that. We are all a little bit shaky under those pressure situations, and like I said, I don’t know how you get over that other than experiencing more and more of those situations so it doesn’t effect you. We all hope that’s the case anyway.”

Three other players for Saxony scored 10-plus points in the game, which were McWilliams [14], Brune [13] and junior Laurel Mueller [13].

McWilliams shot 67 percent from the field and was second on Saxony in rebounds with six while also having a team-high four steals in the game.

This tournament marks the final regular-season tournament for Saxony, and the Crusaders now have 12 games left in the season with an overall record of 8-4 thus far.

Saxony will face Oran and Cauble one more time this season, which will be on Monday, Jan. 16, at 7:30 p.m. at Saxony High School.