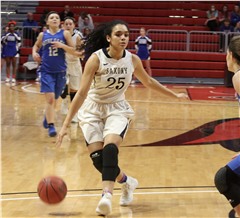 The Saxony Lutheran girls basketball team (8-1) advanced to the championship game of the annual Holiday Classic Tournament for the sixth time to face Cape Notre Dame (6-4) for the 2017 title.

The Crusaders, who defeated the Bulldogs earlier this season at 51-43 in the semifinals of the SEMO Conference Tournament, took an early lead over Notre Dame at 14-3 in the first quarter, and they never looked back.

“I didn’t think [either team] had full tilt for whatever reason, holidays or whatever, but we did a lot of good things,” Saxony head coach Sam Sides said. “We can execute better, and again, I’m pretty picky. I think we can always get better.

“I want us to be perfect, and we are careless sometimes, and that aggravates me. It was a good win because Notre Dame is always tough to beat. You have to come to play because they are going to make plays, so I think our size inside hurt them a little bit.”

Nearly two minutes went off the clock until the first points of the game were on the board as Saxony forward senior Masyn McWilliams found senior center Addie Beussink in the low post for a layup.

The Crusaders extended its lead to 5-0 over the Bulldogs with under six minutes to go in the first when sophomore guard Emma Brune hit her first three-pointer of the night as she was wide-open against Notre Dame’s zone defense.

Notre Dame answered this with the team’s first score as junior Julia Williams got the ball to sophomore Riley Burger for a quick score.

After Saxony failed to score off a putback shot, the Bulldogs regained possession, but Brune recorded her lone steal of the night for a fast-break opportunity, which she converted on to give her team a 7-2 lead.

The Crusaders eventually took their 14-3 lead, thanks to a 5-0 run, capped off by McWilliams when she hit a shot from beyond the arc after another Saxony steal.

“We hit some outside shots, so you get some outside shots with your inside [shots], and that makes us tough to deal with,” Sides said. “We can’t be stagnant — we can’t sit back. We have to be active, and I feel like I have better athletes than anybody in this tournament.

“That only works if we use our athleticism. If we stay back and are passive or stagnant, it negates that. The more interactions we have and if you have better athletes, it’s going to come out in your favor more times or not.”

On the inside for Saxony, Beussink recorded her first of six blocks in the game to eventually give her team the 14-3 lead, but Notre Dame senior Lexie Welter finally answered for her team.

“[Beussink] is definitely long and she gets up there,” Sides said. “She’s not a real big jumper, but she has long arms. Her biggest benefit that has increased from last year is that she has been more aggressive. She’s going to foul once in a while, but still we benefit from that. We’ll give up a foul to get three or four rebounds or a couple putbacks.

“Instead of letting the ball come to her, she’s being going and getting it. I would say she is probably our most improved player from last year, so we need to keep her going.”

Welter led the way for the Bulldogs by scoring a game-high 15 points, who finished the first quarter with five of Notre Dame’s eight points.

Brune hit one more three in the first quarter to get Saxony to 17 points, having scored as many points Notre Dame did in the quarter at eight, thanks to her two threes and fast-break score.

Saxony had a total of four players make this year’s all-tournament team, and one of them did not score until the second quarter, which were the Crusaders first points in that quarter with under four minutes left to go.

This was senior guard Laurell Mueller, who scored four of her six points in the game within a 45-second span to regain a double-digit lead over Notre Dame at 21-11.

“We did the same thing the other day,” Sides said. “We were making one pass and then shooting, and we had open shots, but still we need to get a better shot especially if we aren’t hitting them. Once we started [attacking the bucket inside] we started scoring.

“Before that, we’d make one or two touches, the ball would never make it to the paint and we didn’t hit the outside shot. We have one shot, and that’s not very high-percentage basketball if we do that.”

The Bulldogs went on a 4-0 run to start the second quarter before Mueller’s scoring surge, but Saxony answered with a 6-0 run of its own as McWilliams hit two free throws to finish the run to take a 23-11 lead with under three minutes left in the half.

Welter was able to stop Saxony’s run with a layup before McWilliams hit her second three-point shot of the night to extend Saxony’s lead to 26-13 with less than two minutes to go in the second.

The Crusaders failed to score again as Welter got to the line for two successful free-throws with Williams also getting to the line for Notre Dame, making one of her two attempts.

“Lexi’s dad and I used to play softball together for years. She’s a great competitor,” Sides said. “I told [my team] we have to try to keep the ball out of her hands, and she’s going to take the ball to the basket. We have to stick with her in the bucket, and sometimes we did that, but sometimes we didn’t or ended up fouling her.

“The main thing is you can’t give them two or three chances. This game compared to the Cape game we did a lot better job on the boards. The other night we kind of stood, but tonight we made an emphasis to go check somebody off the boards every time. Every time we didn’t, though, Notre Dame scored.”

Saxony had a total of 17 rebounds in the game, four a piece coming from Beussink and McWilliams and three from junior forward Cassidee Wunderlich.

The team was without sophomore center Gracie Price, who has been battling a patella injury.

“The last time we played Notre Dame we had Gracie, and Gracie has really come on,” Sides said. “She’s just a sophomore, and she made a really big jump from last year.

“She’s getting more aggressive, and she has a little knee problem. She had an MRI, and I think she’s going to start practicing Friday [Dec. 22], so we just have to keep an eye on her.”

Sides said when Price is on the floor along with fellow center Beussink and forwards McWilliams and Wunderlich, she is probably the best post player on the team as far as catching the ball and scoring inside the paint.

“[Price] is a little bit slow of foot, but she’ll keep working and improve on that,” Sides said. “Like I said, she’s still growing and she’s just a sophomore, so when she gets back in the lineup that’s going to give us more depth and help us down the road for sure.”

To start the second half, Burger put up two for Notre Dame in the first minute before Beussink started a 6-0 run for Saxony with an offensive rebound, which she put back for two.

McWilliams scored the next four points in 20 seconds, with her final two coming from free throws to make her 4-for-4 on the night.

Coming into the game, McWilliams was shooting 73 percent from the free-throw line, and she finished 5-for-6 against the Bulldogs.

“[McWilliams] is probably our most consistent [free-throw shooter],” Sides said. “We struggle as a team in free throws, and she is our best one, but we are hot and cold there. Some days we can hit them, and some days we can’t. A lot of times when you are struggling to score that’s the best way to get in the scoring column, to attack the glass and get fouled.”

After Notre Dame halted Saxony’s 6-0 run with three points, one from the free-throw line, the Crusaders went on another 6-0 run started by Brune, which forced the Bulldogs to take a time out with four minutes, six seconds remaining in the third quarter down 38-21.

The Bulldogs were able to answer nearly a minute later as Burger got the ball to Welter in the paint for two. Beussink answered with another putback a minute later.

The Crusaders took a 44-27 lead into the fourth and final quarter, and they were able to take their highest lead of the game at 55-33 after Brune hit her final three-pointer of the night to give her 13 points.

Saxony’s bench players were in for most of the game after the Crusaders took their 22-point lead to eventually defeat the Bulldogs 58-42.

This was the sixth-straight trip to the holiday classic championship for the Crusaders and fourth win in the span as four players for Saxony were named to this year’s all-tournament team in Beussink, Brune, McWilliams and Mueller.

Beussink finished with a game-high 16 points as McWilliams paced her with 15 of her own as Brune was third at 13. These three are the only players on Saxony averaging more than 10 points per game right now.

Sitting at 8-1 overall with a break until Jan. 2 when the Crusaders will return to action the Delta New Years Tournament, Sides still sees room for improvement.

“We are still making some silly mistakes, silly fouls, and in our passing game we get a little bit lackadaisical,” Sides said. “I tell them sometimes, ‘You don’t get beat sometimes because you miss shots, you get beat because you don’t get shots.’”