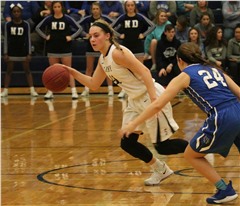 The Saxony Lutheran girls basketball team faced Cape Notre Dame for the third time this season as the end result was the same — the Crusaders won.

Saxony was able to defeat the Bulldogs 61-51 at Ger-hard Birk Gymansium as sophomore guard Emma Brune scored a game-high 19 points to lead the Crusaders to their 17th win of the season.

This put Brune over the 500-point scoring mark for her career at Saxony as she has now scored a total of 551 points through 41 games.

Brune also recorded a game-high six offensive rebounds, which tied for the Saxony team-high in total boards as junior forward Briann Jenkins came down with three offensive and three defensive.

“Well Emma is pretty strong — she battled [for those offensive rebounds],” Saxony head coach Sam Sides said. “You have to battle [for rebounds], and I was disappointed in a couple of my girls because we let them take the ball out of our hands a couple times. We have to be tougher than that.”

Two other players for Saxony also exceeded double digits as senior forward Masyn McWilliams put up 15 points, six from beyond the arc, and senior guard Laurel Mueller scored 12 with a 60 percent shooting percentage from the field.

Nearly all of Mueller’s points came from pull-up jumpers off the dribble, which Coach Sides said is a rare asset since many players in southeast Missouri can’t hit that particular shot.

“I keep telling [Mueller] that there are hardly any girls in southeast Missouri anywhere I’ve seen that can shoot off the dribble, jump up and stick it in the basket,” Coach Sides said. “That’s a weapon because she can jump up anytime and make that shot. She needs to be more proactive and look to that every chance. Every time you have a gap and a place to go, attack them. She can score, and she’s very hard to defend.”

Mueller was able to establish her pull-up jumper early in the game off a steal to give her team a 4-2 lead over Notre Dame in the first minute.

The Bulldogs were able to tie the game following this play, but Saxony managed to go on a 7-0 run to take an 11-4 lead, which was started by a McWilliams three.

Saxony senior center Addie Beussink, who only scored four points in the contest, was able to make plays defensively with two steals and one defensive rebound to help maintain the scoring run.

Following the spread, Notre Dame was able to go back and forth with Saxony to eventually make a 6-0 run before the end of the first quarter, which was put to a halt off a rebound by Mueller for junior guard Macey Smith to score her only two points of the game.

One major key for the Crusaders to take the early lead was their full-court pressure, which the Bulldogs implemented defensively as well to create problems for Saxony’s offense.

This allowed Notre Dame to go on a 9-0 run in the first four minutes of the second quarter to make it a two-point game with Saxony leading 25-23.

“We played against a full-court press the other day and went right through it,” Coach Sides said. “Tonight we struggled. We didn’t get to our spots, and we didn’t execute. I told them we have to be on target and be on time, and we weren’t there. Notre Dame outworked us. Their press was pretty effective.”

Notre Dame junior guard Julia Williams scored three of her 14 points from beyond the arc to make it a two-point game, who was answered by Brune with an offensive putback.

The Bulldogs got within two points again at 27-25, but sophomore center Gracie Price was able to provide a spark with seven points in the second for Saxony as she came off the bench.

Price’s seven points came during the Crusaders 9-0 run, who also collected one of her three rebounds in the game during the span.

Saxony led Notre Dame 36-28 heading into the locker room, which extended its lead to 50-38 in the third quarter as Mueller scored six points while also recording a rebound and a steal before the fourth and final quarter.

After Mueller added four more points to lead Saxony to a 56-41 lead, Notre Dame junior guard Megan Heisserer answered with a three that started a 10-0 run for the Bulldogs.

Notre Dame senior forward Lexi Welter, who finished with eight points in the game, came up with a steal for Heisserer to score two more points to make it 56-48.

Williams was then able to hit a shot from beyond the arc after a Notre Dame time out to complete the run for Saxony to only lead by five at 56-51 with just over three minutes remaining in the game.

Once Saxony regained possession, the Crusaders started to play keep away from the Bulldogs and had much success doing so as it forced Notre Dame to take another time out with 1:39 left.

Following the time out, McWilliams was able to get the ball to a wide-open Brune, who was able to score off a layup to give Saxony a seven-point lead with one minute and a half on the clock.

The Crusaders held on for the win and managed to score three more points in the game for the 61-51 win.

Saxony improved to 17-2 overall with the win, but the Crusaders lost their third game of the year over the weekend against Class 5 Jefferson City 49-34.

The Crusaders were only able to shoot 32 percent from the field with only Beussink and McWilliams able to score in double digits with the remaining scorers each being held to under five points.

The Crusaders were able to defeat SEMO Conference opponent Poplar Bluff with ease at 69-38 as Saxony kept the Mules scoreless in the second quarter.

Beussink led Saxony in scoring with 21 points on the night as well as recording 10 rebounds for a double-double.

McWilliams also hit double digits with 17 points as nine came from beyond the arc for a shooting percentage of 71 from the field. She also recorded eight rebounds, five assists and three steals.

Brune was third on Saxony in scoring with 14 as she also recorded two steals against Poplar Bluff.