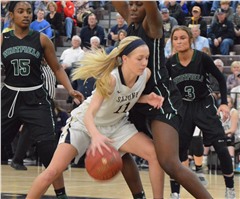 The Saxony Lutheran girls basketball team has each player from last year’s district championship team returning for the 2017-18 season.

Last year marks the fifth consecutive Class 3 District 2 Championship for the Crusaders, and they were only one game shy of reaching the Class 3 Final Four.

Saxony fell to eventual second-place Whitfield 44-37 in a game where the Crusaders were even ahead at one point late in the game, but were not able to finish with the win.

“That’s a blessing we get everybody back because we can make better use of our time because hopefully it’s us reviewing things instead of teaching them things from the get go,” head coach Sam Sides said. “Every year is different no matter if you have the same players or not. They are a little bit different and I’m a little bit different.”

One key player returning to the team is Saxony’s leading scorer, senior guard Laurel Mueller, who was named to the Class 3 All-State Second Team following her junior year.

Mueller averaged 11.4 points per game while also shooting 64 percent from the free-throw line.

Returning as Saxony’s second-leading scorer is sophomore guard Emma Brune, who averaged 10.4 points per contest as a freshman.

“[Brune] is a special player,” head coach Sam Sides said. “She is gifted athletically, and she works on her game. She’s probably the most dedicated basketball player I have because basketball is her thing. The rest of them kind of share with other sports, but I’m expecting a big year from her. She’s going to be hard to deal with because she has great intensity. Her effort is always great, and she showed leadership even as a freshman last year.”

The Crusaders leading rebounder is senior center Addison Beussink, who Coach Sides described as an unorthodox big because of her shooting ability while standing at 6-foot-tall.

Beussink averaged 7.7 boards per game while also leading Saxony in blocks with 1.5 a game.

“When [Beussink] is on, she can throw some in there,” Coach Sides said. “She’s hard to deal with because she’s so long.”

Coming off the bench for Beussink will be sophomore center Gracie Price, who played in 28 games last season where she averaged 3.5 points and 2.5 rebounds per game.

“[Price] is 6-foot-2, and that’s a big girl,” Sides said. “Her skills are pretty good, and she’s getting better hands and is getting more consistent. She’s still a young woman, so she just needs to get a little more strength in her by growing up. She’s also going to be hard to deal with.”

At the beginning of last year in practice, Coach Sides said his team struggled with intensity. The same thing goes for this year’s team, but Sides said the last few days prior to the team’s jamboree were better.

This is the first time since Saxony reached the Class 3 State Championship that the team has had a senior class, and he says this year’s class has shown the leadership he’s expected from them during practice.

“I’ve got some good athletes coming back,” Coach Sides said. “Laurel is a good volleyball player, a good soccer player, and she can run and jump. She is fairly tall, and she’s long. As a basketball player, there aren’t many girls in this area that can shoot off the dribble. She can do that.”

Coach Sides is looking for more consistency with Mueller’s outside shot heading into 2017-18, and if she improves, he believes she will be one of the more difficult players to guard in southeast Missouri.

Another player who will continue to be hard to defend is senior forward Masyn McWilliams, who averaged eight points per game while also collecting 3.7 rebounds. McWilliams also led the team in assists with 2.5 and steals at 2.3 per game.

Behind McWilliams in steals is senior guard Courtney Kester, and she recorded 2.2 per game while also scoring 6.6 points per game and dishing out 1.4 assists.

One new player on the roster is junior guard Macey Smith, who transfers to Saxony from Delta after the girls basketball program was dropped due to a shortage of players to make a team.

“[Smith’s] sister was an all-state player for Delta, and Macey is probably one of the best players Delta had,” Coach Sides said. “She can only play on junior varsity up until Jan. 9, and then she’ll be eligible. She’s also a relatively big guard, and she can shoot the ball a little bit. She’s a good defensive player, so she’s going to get into the mix somewhere.”

Coach Sides runs three different defensive schemes, which include man-to-man, match-up zone and traffic zone.
Sides has his team work on all three for about the same amount to figure out which one his team will run.

Man-to-man is what Saxony primarily played in the regular season last year, but when the Crusaders reached the state playoffs, they could no longer just run that scheme.

“We couldn’t guard people man-to-man, so we had to play more match-up zone,” Coach Sides said. “We had to adjust to our opponent a lot, but I have good enough athletes to where we can adapt to that. The weird thing about high school is from one week to the next we may play better zone, but then better man-to-man the next week.”

After losing seniors that helped Saxony reach the state championship in 2015-16, Sides thought his team overachieved last year by winning its fifth-straight district title and reaching the Class 3 State Quarterfinals.

One major reason why Coach Sides’ expectations weren’t as high as they are for this year is because the returning players for last season mainly saw time on the junior varsity level.

“They had big shoes to fill, and we responded well,” Sides said. “We got better as the year progressed, and if we do that again this year, we are going to be hard to deal with by the end of the year. We played a team in Whitfield that was highly talented. If we get that far and they get that far again, we will play again, but you have to peak at the right time. You have to give them credit because they did make the playoffs.”