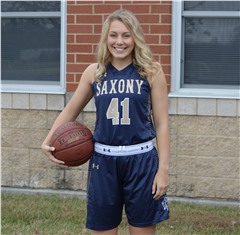 The 2019-20 season will not only be the final year senior Emma Brune laces up for the Saxony Lutheran girls basketball team, it may very well be the last time she plays organized basketball.

Brune will be signing her national letter of intent with Southeast Missouri State to continue her soccer career in January. Brune verbally committed to SEMO following her sophomore year, and last spring, she became the first player in Missouri girls soccer history to be named Player of the Year three times.

“It was insanely difficult [to choose playing soccer over basketball in college],” Brune said. “I still don’t know the exact reason of why I switched to soccer. Like, I really don’t. I love them both and felt like there were better opportunities in soccer.”

Before deciding to play soccer at SEMO, Brune’s original dream heading into high school was to play college basketball like her mother, Jenny, did. Brune started her basketball career when she was in second grade because her older sister, Maddie, played, and Brune wanted to be like her.

Their mom Jenny eclipsed 1,000 points while playing for Cape Central when she was in high school, which led her to playing one season of college basketball at SEMO.

“[My mom] pushed me, and she always worked with me when I was younger,” Brune said. “When we’d go train, she’d always be my rebounder, and then she’d beat the crap out of me down low as I tried to score on her. She really helped me out a lot.”

Maddie has spent the last four years playing soccer at Troy, where she was a three-time team captain and earned All-Sun Belt honors to end her career this season.

Growing up, Brune played in the Cape Girardeau Parks and Recreation League in the all-star group and eventually became a member of TC Hoops. Brune then played with Blue Star St. Louis two years ago, where she faced some of the nation’s top talent in front of college coaches.

“I got a lot of different skills from all the different coaches that I’ve come in contact with,” Brune said. “It helped me grow into the player that I am today. All the exposure tournaments I played in seventh and eighth grade and during high school really helped me play with Saxony because the competition level was insane.”

Heading into her senior year of basketball, Brune has helped lead the Crusaders win three-straight district championships as a starter. Brune has also earned all-district honors every season, while garnering Class 3 All-State and SEMO All-Conference accolades last year as a junior.

Brune broke Saxony’s single-season scoring record last season, where she put up 590 points in 30 games, while the previous record of 506 was held by Brianna Mueller, who set the old record in 31 games. Mueller currently holds the program’s all-time scoring record with 1,819 points as Brune is currently third at 1,248.

Mueller, who is now the all-time leading scorer at Lindenwood – Belleville, and Brune’s older sister Maddie were teammates at Saxony. Brune watched both of them play all four years.

“Seeing the success of that team, I just wanted to make an impact when I came here,” Brune said.

“I’m going to have give credit to my teammates for [last season],” Brune said. “They get me the ball when I’m open, and they help me out a lot. They’re always there to support me.”

It is safe to say Brune has made her impact both on the basketball court and soccer field already with one season left to go in each sport.

Brune also credits her success to putting in the work during the offseason, but her focus on basketball has dwindled since she decided to play soccer in college.

Brune said the transition of focusing more on soccer has been hard because she does not want to let her team down in the winter. However, Brune said she still finds plenty of time to put up shots and work on ball handling.

Other than a basketball court or soccer field, another place someone could find Brune is in the weight room since she lifts almost everyday during the summer. Brune also lifts weights in the morning before school during the fall, while also doing specific workouts for soccer and basketball right after school.

“This past fall I’ve really been focusing on lifts for soccer to get ready for this season and the upcoming fall at SEMO,” Brune said. “I just kind of combine [my workouts] together and come up with a workout plan.”

Brue said she has “put a bunch of shots up” on top of working on ball handling in preparation for her final season. Another reason why Brune has lifted so much is because this year’s team is not as big as it has been.

Saxony’s head coach Sam Sides said he plans on using Brune in the post this season because of her physicality.

“I think she’s put in a lot of time to make herself stronger and a better athlete more than anything else,” Coach Sides said. “She’s a very dedicated person and hard worker, who comes from a strong family. I’m blessed to have her. … Emma is a senior now, and being a senior is a little different than being an underclassmen — there’s more pressure on you.”

The goal for Brune and her teammates for basketball this season is to win the Crusaders an eighth-straight district championship as well as reach the Class 3 Final Four for the first time since her sister did back in 2016. Saxony has come up one win shy of reaching the final four each season Brune has been a Crusader.

The first two losses came against Whitfield, which went on to place second and third respectively. That team was led by current Mizzou basketball player Aijha Blackwell, who was also a three-time all-state selection.

Last season the Crusaders fell to Licking 65-57 in overtime, which went on to place fourth overall in the final four. They are led by fellow returning Class 3 All-State recipient Karlee Holland, who will begin her college basketball career at Three Rivers next year.

Brune and the Crusaders will be hoping to break their three-year drought of not making the final four this year as they return another starter from last year in senior Makayla Mueller. Makayla also happens to be Brianna’s younger sister.

Saxony is tasked with replacing a total of three starters that were each all-district selections, but Brune does not see it being a problem with the group of players on this year’s roster.

Hoping to fill starting roles will be players like senior Olivia Spanley along with juniors Alice Hogendobler, Maddox Murphy and Sydney Turner. Other Crusaders who will see playing time include sophomores Emma Voelker, McKenna Webb and freshman Abagayle Britton.

“I’m very confident in [them] — they are all stepping up in practice, and they’re feisty,” Brune said. “We are crazy close, and we never fight. We get along super well, we all hang out outside of practice and it shows on the court.”

Brune said this season will be bittersweet for her since it will be the last time playing basketball at Saxony, so she is looking forward to making as many memories as she can.