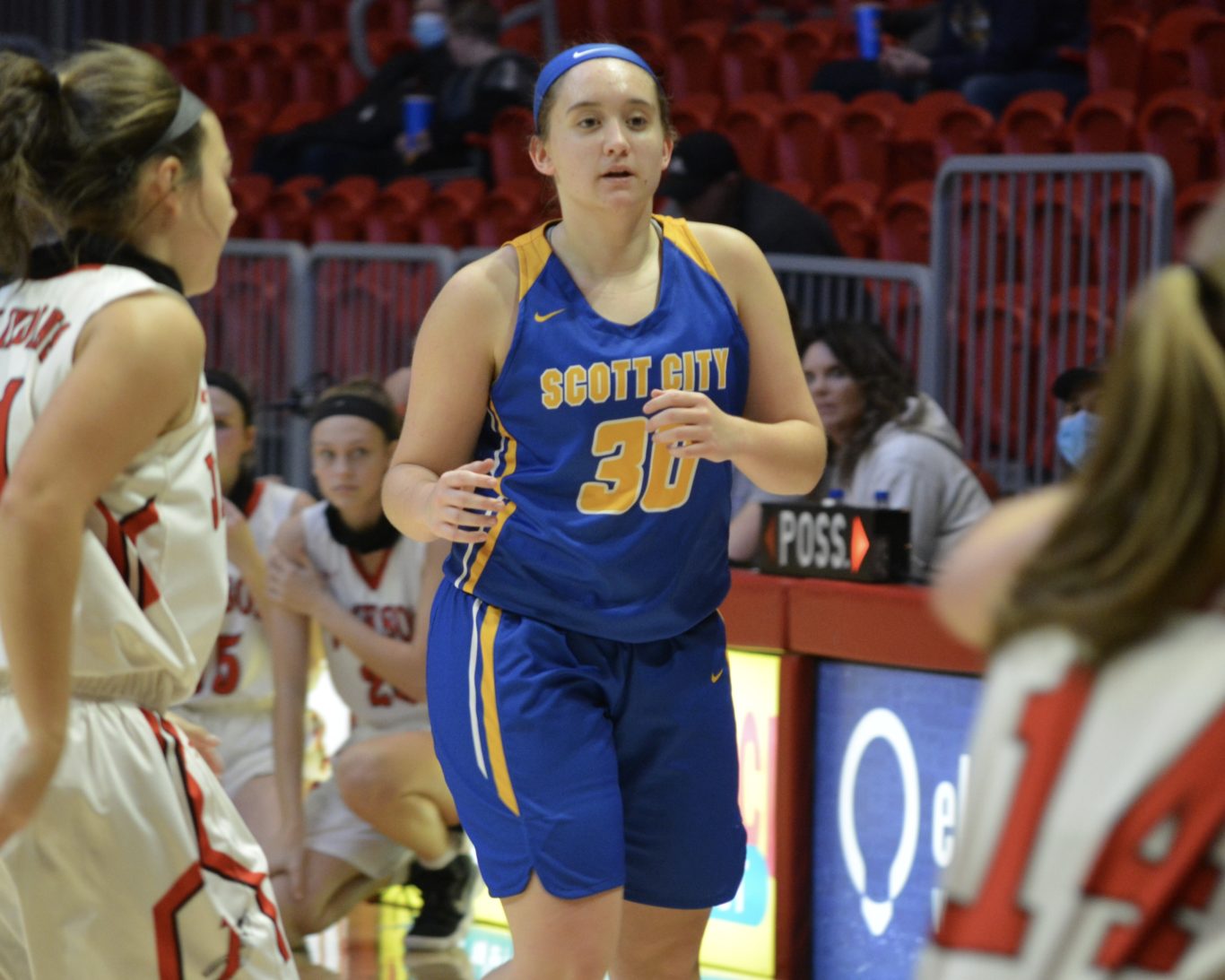 Thousands of players finish their entire high school basketball career without ever scoring 1,000 points, but that’s not the case with Scott City junior Kacie Daigger.

Last Friday night, Daigger officially reached the mark in a 30-point, 67-37 win over Class 3 District 2 opponent Charleston, which was the Rams second-straight win as they are now 3-2 versus teams in their district.

Going back to Daigger scoring her 1,000th point, there was no question she was going to accomplish the feat this winter. The only thing was is that it took longer than Daigger expected since she missed five games with an ankle injury.

Along with being a 1,000-point scorer, Daigger also has her name in the MSHSAA girls basketball record book for tying the highest 3-point percentage in a single game. Daigger did so by going 10-for-11 from beyond the arc for a 3-point percentage of 90.9% against Advance in the first game of the season Nov. 23, which is a record that was originally set in 2005.

Scott City defeated the Hornets by a score 81-54 as Daigger scored 14 points on top of her 30 from threes in a game where she only missed four field goals overall. Daigger’s total of 44 also happens to be her career high — a career that became a possibility during a conversation with her parents on a car ride.

“All of a sudden I was like, ‘I want to play basketball,’” Daigger recalled. “My parents just laughed at me, and they were like, ‘No you don’t. That’s a lot of running.’ I was like, ‘Yeah, I really do.’”

Daigger first started playing basketball in third grade, and the same reason why her parents told her she wouldn’t like it was the same reason why she “hated it” to begin with. Daigger even considered quitting because she had a head coach that would make her and her teammates run all the time.

Daigger’s parents made her stick with the sport because they are the type of people who believe, “Once you start something, you can’t stop it.” Daigger clarified that she could’ve quit following the season, but just not during.

Obviously Daigger is more than thankful her parents made her stick with basketball because it has become her passion in life. Besides playing, what Daigger loves the most about the sport are the relationships she’s been able to make with coaches and countless players.

What Daigger enjoys more about basketball compared to other sports like softball is it’s fast paced and that there’s always something to do. Kacie is now getting noticed as one of the better players in Southeast Missouri as she picked up her first official college offer from Webster University this weekend.

It was only natural that Daigger was going to play a sport of some kind since her parents were both athletes growing up as her mother, April, played basketball in high school. “They push me like crazy, but I’m thankful for that because I wouldn’t be where I am without them.”

Daigger played for multiple AAU teams growing up and is currently on Southeast Dynasty with other area talents and fellow juniors like Sikeston’s Karris Allen and Delta’s Kendall Holweg. What Daigger likes the most about playing for Southeast Dynasty is that every player comes in always ready to work, and they love the game like she does.

“With school teams, you don’t always get girls that actually love it, but all these girls [on Southeast Dynasty] are one of the best players on their high school teams,” Daigger said. “Karris is awesome — she can do everything, and how big she is helps so much. You can always trust her with the ball, and Kendall from Delta is so tough. She plays so hard, and she’s everywhere.”

Another one of the top players on Southeast Dynasty is Twin Rivers junior Taylor Watson, and Daigger said she’s never seen someone play as hard as Watson does. “She’s always going after every single ball — she sacrifices her body and always comes to practice with purple knees,” Daigger explained.

Daigger said the skills she ties to pick up from the players on Southeast Dynasty are being a better defender as well as driving to the basket. The skill Daigger possesses that her teammates try to learn from her is obvious — shooting.

One of the reasons why Daigger has had to focus on driving to the basket is because she’s been scared to as she has a back disease called CRMO (Chronic recurrent multifocal osteomyelitis). This made her back hurt frequently, which made her quit every other sport besides basketball.

At first doctors couldn’t find out what was wrong with Daigger, but once she was diagnosed with CRMO and received treatment, Kacie went back to working on driving since the pain was no longer there.

When Daigger first started playing basketball, she admitted that her shot was “so ugly” because she released the ball with two hands. Daigger credits her father with becoming a better shooter because he always worked with her on having the proper form.

Another person who currently has been helping Daigger become a better player is none other than former Southeast Missouri State women’s basketball player Erin Bollman, who also scored 1,000 points in her high school career at Meadow Heights. Bollman currently plays basketball professionally overseas in Melbourne, Australia.

“I practice all the time — any chance I get I’m always at a gym,” Daigger said. “This year I got to meet with Erin Bollman, so I meet with her three to four times a week before school. Then I would meet with her whenever she would ask to go to the Show Me Center, and we’d train for three hours or play pick up.”

One of the shots Daigger has been working on frequently is shooting off the dribble to expand her game so she’s not just seen as a shooter because “people can stop just shooters,” Daigger explained.

To become more than just a shooter, Daigger now works on getting around defenders as well as taking contact to force fouls so she can shoot free throws. Daigger said that is what Bollman works on with her during every training session since Kacie clearly knows how to shoot.

“I love Erin, and I’ve always looked up to her,” Daigger said. “I used to go watch her play at SEMO, and I’d go to the SEMO camps — I thought she was the coolest person ever. She reached out when she did a SEMO elite camp, and my mom kept telling me to ask her to work with me. I was way too scared and was like, ‘There’s no way she’s going to want to.’

“She’s been very committed to me, and she’s always willing to go in to work. It’s awesome to be able to get pointers from someone like that who’s so good at the game. A lot of people don’t get that chance to be mentored by someone like her.”

What Daigger takes from Bollman as a role model is her work ethic since she’s always in the gym. She also looks up to Bollman for her positive mentality and knowing how to work with others to become better basketball players because that’s what Daigger aspires to do as well.

That positivity helped Daigger go through a difficult time at the beginning of the season since after the season opener against Advance, Scott City’s entire team was quarantined and didn’t play until nearly a month later in the Holiday Classic held at the Show Me Center.

Daigger only played in one game in SEMO’s arena since she suffered an ankle injury against Jackson in the first round. While having to watch her teammates play in two more games without her at the Show Me Center, Daigger said it motivated her to work even harder and never take being able to play basketball for granted. “I’m very thankful to be able to play.”