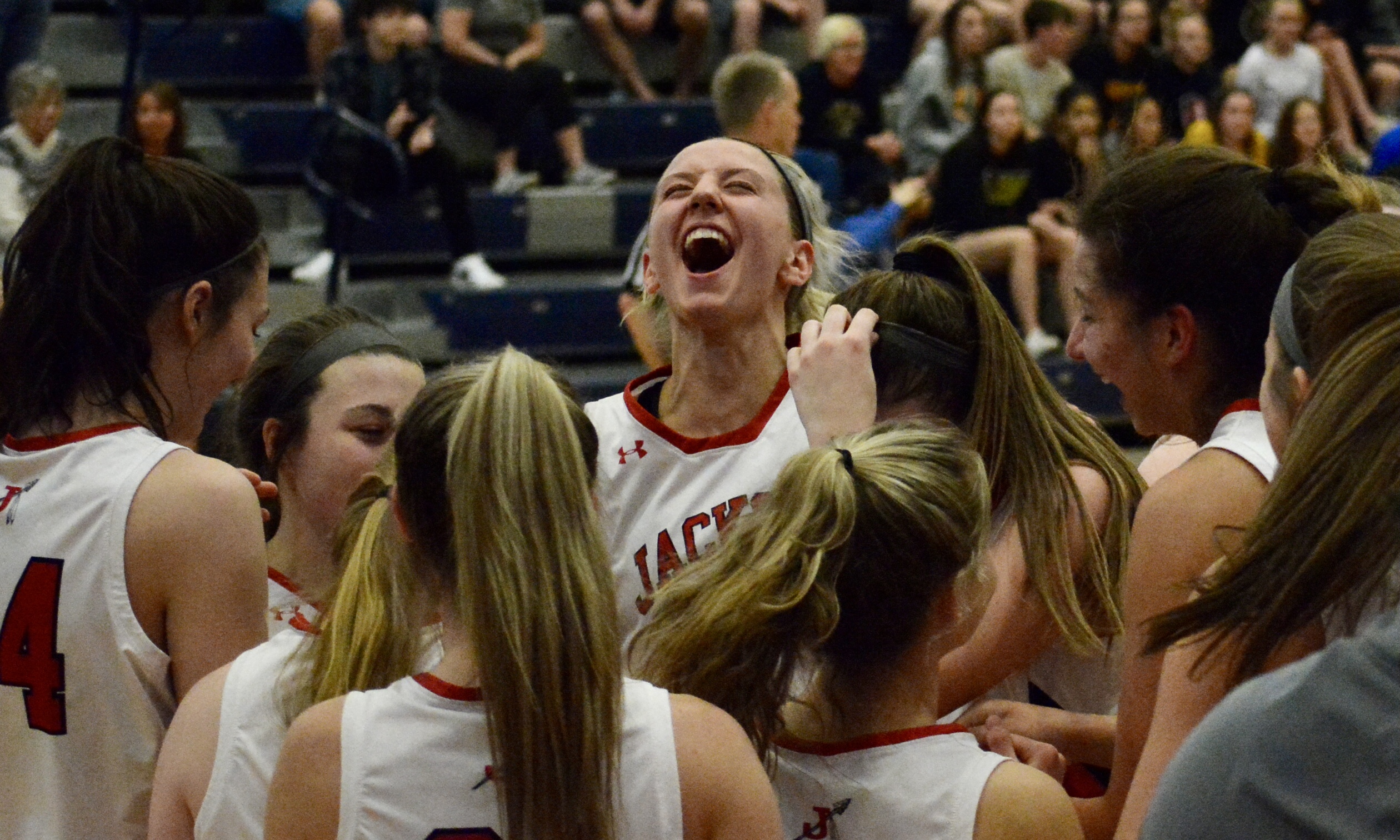 Despite returning a future college basketball player like veteran senior guard Jordyn “Jo” McClellan, there were still plenty of firsts for the Jackson girls basketball team this season.

First off, the Indians were under a new head coach in Adam Stoneking, who had been on the staff for the past two seasons, though. Then Jackson had four first-year starters in its rotation, including the likes of junior breakout guard Katie Waller, guard Maci Wendel, forward Kamryn Link and sophomore guard Holland Guilliams.

Even though the Indians had to deal with so many firsts, they were still able to come away with what is now their second-straight Class 6 District 1 Championship on Saturday.

“Unfortunately, this year was a little bit harder because last year the district title game would’ve been last Saturday,” Coach Stoneking said. “Like Notre Dame, we basically had to win a sectional game to get that district championship trophy. It was just a little bit tougher this year, but we just take it one game at a time.

“You just put your next game infront of you, and you don’t worry about anything else. We only want to worry about trying to get to Springfield at the end of the year.”

Jackson pulled this off with a 13-point, 48-35 win over Oakville (13-11) as McClellan and Waller — like almost every game this winter — were the Indians top-two scorers. Jo and Katie combined for 29 points with a game-high 15 and 14, respectively. The two also knocked down a combined five 3-pointers as McClellan finished with three and Waller two.

“Kids are good at what they’re good at — some kids are really good at rebounding and some are really good defensively,” Coach Stoneking said. “Then some just know how to score the ball, and Jo and Kate both know how to score the ball. A lot of times you don’t worry about it — you just want to make sure they have a good mindset going in. I always tell them, ‘I don’t care about the last four or five you missed, I care about the next one you’re going to make.”

Only one other Jackson player made multiple field goals in the contest, which was junior post Aubrey Brothers off the bench. She finished with five points as she made one of her two free-throw attempts.

Even though the Indians shot 59% from the charity stripe as a team, players like McClellan, Wendel and Guilliams made them when it counted most. Jo went 4-for-4 at the charity stripe in the second half, while Maci was 4-7 and Holland 2-for-4 in the fourth quarter.

Along with making clutch free throws, Wendel and Guilliams are also the players for Jackson that play with a nonstop motor on both ends of the floor. These players are always diving for loose balls, pressing ball handlers and gunning for steals.

Coach Stoneking doesn’t care if Guilliams and Wendel aren’t putting up the type of points McClellan and Waller are because they’re impacting the game just as much in their own way.

“Scoring wise today, Holland and Maci won that game for us because they shutdown a girl scoring 17 and 13 a game,” Coach Stoneking said. “They had to work their butts off all game long — harder than anybody else. If they come out here and were 0-for-20 — as long as we got stops — I’m OK.”

Oakville’s leading scorer in the game was junior Kylie Anderson, who finished with a team-high 12 points for the Tigers. Anderson scored eight of those points in the fourth quarter alone.

It shouldn’t come to a surprise to the Jackson faithful that an athlete like Guilliams is already starting and thriving for the girls basketball program. Holland is no stranger to winning district championships as she’s already done so twice as a defensive specialist for the Indians volleyball team.

“It’s exhilarating being able to help out the team and get to know these girls, and get comfortable playing with them throughout the season,” Guilliams said. “Starting as a freshman for volleyball, that helped me get my mindset right and know what competitive level I need to be at.

When describing her mentality for being so aggressive on the court, Holland said, “Well, ‘This ball is my ball.’’ I don’t want to give up anything that I can get to. Effort is No. 1 all the time.”

Guilliams also comes from a prominent family when it comes to Jackson athletics as her siblings include former Indians like Payne Guilliams, Piper Guilliams and current senior Flint Guilliams.

Flint and Payne were both all-state football selections, while Payne was also all-state in wrestling. Piper — a 2020 All-CBJ Team selection — was a three-sport athlete playing basketball, volleyball and soccer for the Indians.

“It’s an honor to have my family name passed down through many years of success,” Guilliams said. “I give a lot of credit to my parents because they’ve pushed and driven me to where I am now.”

Jackson is now one win away from reaching the Class 6 Final Four, which would be the Indians first trip to state since 2003 when the team was coached by Ron Cook. The Indians (17-8) will take on District 2 Champions St. Joseph’s Academy (19-9) in the quarterfinals on Saturday.

“I couldn’t ask for a better environment with my team on the court, and we’re always there to support each other,” Guilliams said. “I feel like we have a really good chance of reaching state. We’re playing really well, and we’re playing together.”