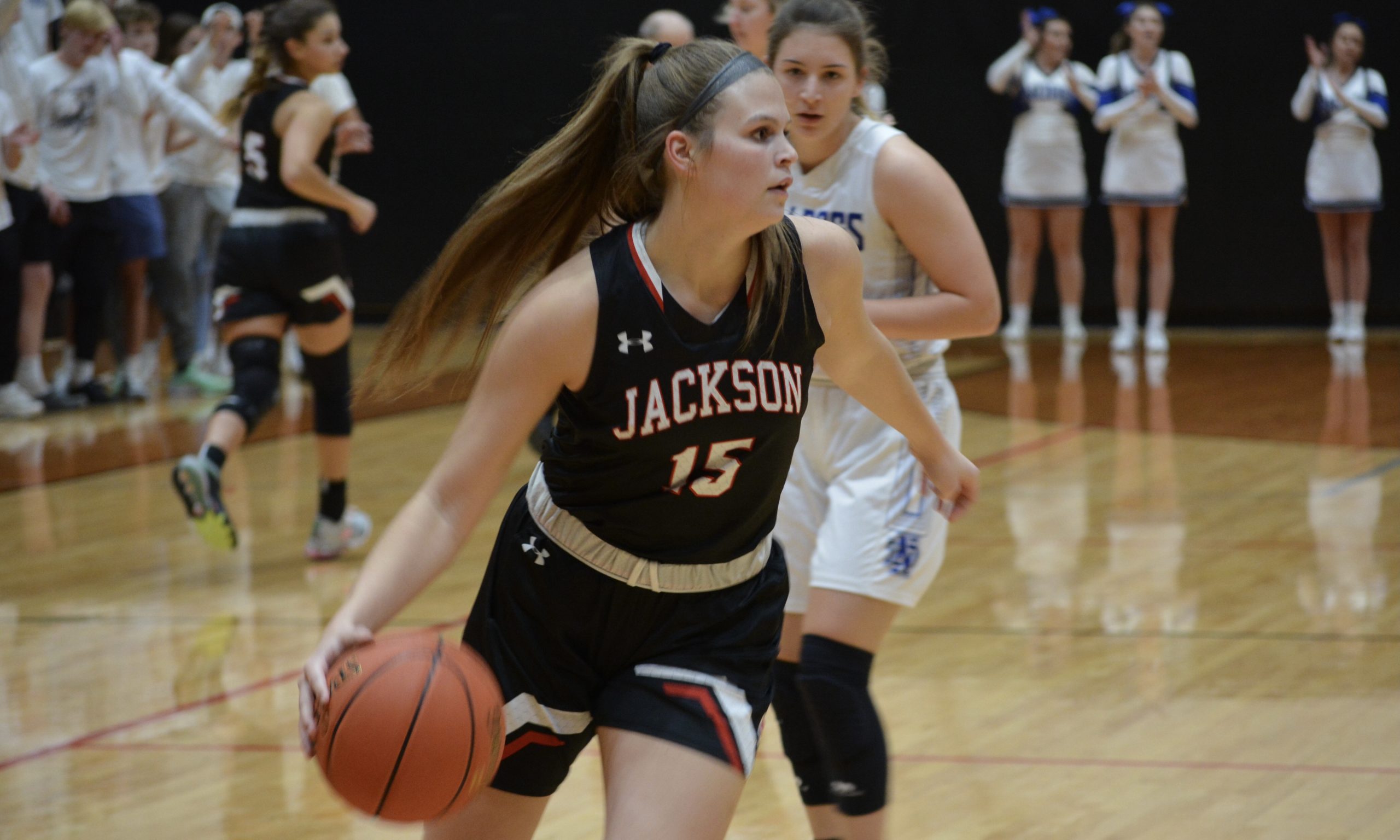 Heading into this season, the Jackson girls basketball team is one year removed from a season where the Indians finished five points shy of reaching the Class 6 Final Four.

Despite not making it to state, Jackson won its second-straight and fifth overall district championship in the six seasons last winter. The Indians also brought home the Lindbergh Invitational title and finished with a record of 10-3 (17-9 overall) in regular season and postseason tournaments.

“You try not to let that carry over what we do this year,” Jackson head coach Adam Stoneking said. “But I have been super excited about what we’ve been doing in practice because we’ve had some amazing practices.

Jackson only graduated one starter and will return its first all-state selection since 2012 in 5-foot-10 senior guard Katie Waller. She was named as one of the top 21 players in her class after averaging a team-high 16.5 points per game along with recording 6.5 rebounds, two assists and two steals.

“She’s been fantastic with her work ethic — she puts her expectations at a really high level and even higher than what I expect,” Coach Stoneking said. “I never have to tell her to work hard, but that’s everybody across the board.”

Along with being named all-state, Waller earned SEMO All-Conference and Class 6 District 1 All-District honors while also being selected to the First State Community Bank Holiday Classic’s All-Tournament Team. Waller racked up these accolades after playing on local AAU team SEMO Sizzle during last spring and summer.

“I thought she’s played really well [in practice] so far,” Stoneking said. “Last year was kind of a surprise — you knew she was going to be good, and you could see it at practice. I didn’t think she would have the season she had, especially how she shot the ball the first two thirds of the year.

“If you left her open, she just made it. I really didn’t foresee that good of a year, but she’s taken it in strides. She doesn’t act like she deserves something or is entitled to anything. She comes in and works, so I expect her to be just as good, if not better than, she was last year.”

The lone starter Jackson graduated was guard Jordyn “Jo” McClellan, who was also named all-conference, all-district and to the Holiday Classic All-Tournament Team. McClellan was a four-year starter for the Indians, averaging 10 points, four rebounds, three assists and 1.5 steals per game in her final season.

Waller and McClellan both played on SEMO Sizzle together as Jordyn had been a longtime member of the program.

“When you look at players like Camryn, Holland and Maci, you could put any of those girls on another team, and they’re probably the best on-ball defender on that team,” Stoneking said. “We can really play the matchups the way we want them.

“When you play with them, you love to have them on your team, but if they play against you, you absolutely hate them. Maci always seems to be around the ball, and you can see players she’s guarding get so frustrated with her because she’s so tenacious around the ball. Camryn is turning into that player, too.”

As one of Jackson’s key contributors last season, Guilliams was instrumental in helping the Indians win their second-straight district title. Holland not only played excellent defense, but she also scored when Jackson needed it and made clutch free throws.

“As a freshman, I thought she was far and away our best guard — getting to the basket, scoring and stuff like that,” Coach Stoneking said. “Last year as a sophomore, you take a step back offensively when you’re trying to learn and do so much.

“The pace of the game speeds, but it’s not beyond her anymore — she’s creating the pace. She does such a great job of pushing the ball, getting her head up, looking down the floor and going to get offensive rebounds.

“She’s that person when the shot goes up, she’s going to get it because she wants another shot. She’s fearless going to the basket, so I definitely expect to see the type of offensive player we saw when she was as a freshman on J.V.”

As for Alsdorf, she played valuable minutes throughout the season and right out of the gate in the SEMO Conference Tournament.

“We always talk about big strides players make from their freshman to their sophomore year or maybe their junior to senior year, and I definitely think she’s made that jump this year,” Stoneking said. “From what I saw at the end of the season to the summer, she has really, really improved.”

Along with those five, the Indians will also have two 6-footers at their disposal in volleyball standouts junior Nadia Wasilewski and sophomore Katy St. John, who both stand at 6-1. Together, these two have helped Jackson’s volleyball program win back-to-back district championships.

“[Having that size] opens up options like with things we couldn’t do last year,” Coach Stoneking said. “If we played against a team that had size, and they ran a zone defense, it was extremely hard for us to get the ball inside. Now having Nadia back and Katy playing better this year, we can do some high-low stuff and force teams to have to make some decisions on what you’re going to do inside and outside.”

One aspect of the game that opens up offensively for the Indians is the pick and roll since last season they weren’t able to because of the lack of height from players who set screens.

“Having players like Nadia and Katy when they set that screen, we’re able to see over the top,” Stoneking said. “As soon as we turn the corner, we can just throw it up and let them go get it. Katy and Nadia both run the floor so well. If they don’t get a rebound, they end up getting a lot of layups. We can run a lot of the same stuff offensively, but now it’s just not our guards trying to score everything.”

Returning players who will likely have a bigger role than they did last season are two Indians in 5-4 senior guard Lauryn McDowell and 5-7 junior guard Payton Gannon.

For Coach Stoneking, he looks at the season in two sections: Christmastime and after that. He feels like this year’s team is much more prepared for the first half compared to last winter.

“It is a long year, and last year we kind of hit a lull around the middle of January,” Coach Stoneking said. “We won the Lindbergh tournament and right after that we just struggled to do anything right.

“It wasn’t effort — we just couldn’t execute. We struggled for a two-week stretch where we lost some games against some really good teams, but I thought we should’ve been in those games a little bit more.

“Our goal this year is to make sure that doesn’t happen. To make sure we don’t get in a rut anywhere and keep everything moving positively.”