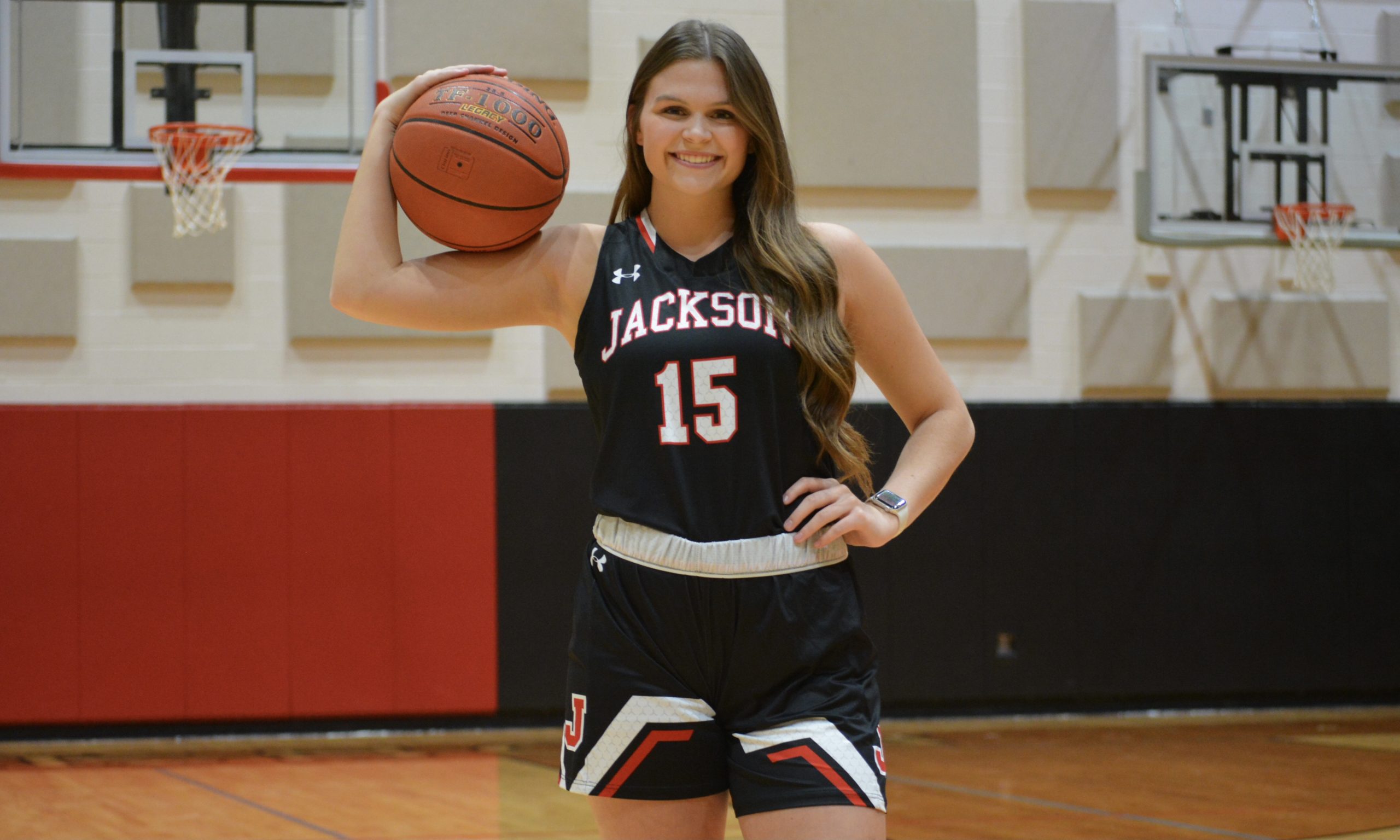 Last winter, 5-foot-10 senior guard Katie Waller made history by becoming the first Jackson girls basketball player to be named all-state in a decade. The last Indian before Waller to do so was Dru Haertling in 2012.

In order to be selected as one of the 21 best players in all of Class 6 — Missouri’s highest classification — Waller led Jackson in scoring with 16.5 points per game and rebounds at 6.5 boards a contest.

“It’s still so crazy, like, when people ask, ‘Katie, how did you feel about making all-state?’ I’m like, ‘I don’t know,’” Waller said. “It’s so surreal to me, and when [Jackson head coach Adam Stoneking] told me that, I honestly thought he was joking. That’s just unheard of — even the players I looked up to as a freshman didn’t get that honor.

“The fact that it was me and that my name is going to be on a wall somewhere one day is just so crazy. I’m thankful to everybody who helped me get there, but I’m proud of myself, and I don’t get to say that a lot. I’m proud for everything I did to get there.”

Along with averaging two assists and two steals each contest, Katie also shot the ball phenomenally well by knocking down 42% of her 3-pointers and 85% of her free throws. Waller’s percentage at the charity stripe made her the SEMO Conference Free Throw Champion.

In her sophomore year, Waller finished as Jackson’s third-leading scorer while averaging less than double-digit points with 7.7 per game. She also recorded 3.8 rebounds, 1.4 steals and 1.2 assists per game while shooting 35.6% from 3-point range and 79.6% at the line.

“I don’t know what really changed, but I know something did change from my sophomore year to my junior year,” Waller laughed. “I just think I had a better mindset and was more confident in myself and my abilities. I just quit thinking as much about it — I trusted my teammates, and I trusted myself. I think that helped me overall just play more calm, collected and better overall.”

Another key reason why Waller has become the innate scorer she is because of her work ethic. Ever since her freshman season, Katie has come into the gym every morning to shoot. She would work on different types of shots from a variety of ranges.

This paid dividends for Waller last season as she hit a half-court, buzzer-beating 3-pointer against Notre Dame in the SEMO Conference Tournament Championship game. However, the Indians were down by four points instead of three when Katie hit the shot, so they ended up falling by one point at 50-49.

This shot still put Southeast Missouri on notice, though, of how much range she has and how clutch of a shooter Waller can be.

“When I shot the ball last year, I wasn’t worried about missing — I was thinking about making it,” Waller said. “If I didn’t make it, I was like, ‘OK, well I’ve got the next one.’ I thought that way because I was in the gym all the time and felt comfortable like it was a reflex almost.

“When I get done shooting in the mornings, I do shoot a half-court shot just to end on a good note. It went from me experimenting with how far away I can shoot the ball and still be accurate and make it consistently. I’ve obviously grown and gotten stronger, but I just started shooting there and just started making it. It just kind of happened, so I just started to trust myself more.”

Waller said she has also grown in her ability to read the play in front of her. Katie can feel how defenders will play her and uses her court vision to determine where she should go with the ball.

“I think, ‘Well if I went this way, it probably wouldn’t work,’” Waller said. “When their hands are down and I’m open, I might as well shoot. Now it’s not like, ‘What if I miss?’ It’s like, ‘Oh, what if I make it? This is going to go in.’ If their hands are down, I’m confident enough to take that shot.”

Waller and Lexi Rubel were the only two players in the Cash-Book Journal’s coverage area — girls or boys — to earn all-state last season.

“I think it helped my game, but it was weird because I took on a different role when I played for SEMO Sizzle,” Katie said. “I think playing that level of competition and playing with girls who were just as good if not better than I was helped me a lot.

“When we do play these St. Louis teams and teams that are much better than some others we’ve played before, I’ve already been there and done that. … I think it definitely helped me defensively and just helped me mature in basketball for sure.”

In her final season as an Indian, Katie has a chance to become the eighth player in program history to earn all-state multiple times, but she mainly has her eyes set on reaching the final four, which Jackson hasn’t accomplished since 2003.

Waller and the Indians were only five points away from making it to the Class 6 Final Four last winter as they fell to fourth-place St. Joseph’s Academy 41-37 in the quarterfinals.

Along with reaching the state quarterfinals last winter, Waller and Jackson won the program’s second-straight Class 6 District 1 Championship as well as the Lindbergh Tournament Championship. The Indians finished 17-9 overall and only graduated one starter — McClellan — from last season.

“It is crazy when I think about everything that I’ve done leading up to my senior year has been for this moment, and I’m finally here,” Katie said. “It’s crazy this is the beginning of the end, but I’m really proud of myself and the work that I’ve put in. I’m glad that I did put all this time in and have become the player that I am because not only has it helped me as a basketball player but also as a person.”

Waller is keeping her options open as far as playing college basketball goes since she’s still deciding on what her major will be. Katie is interested in becoming a nurse as either a physician assistant or nurse practitioner.