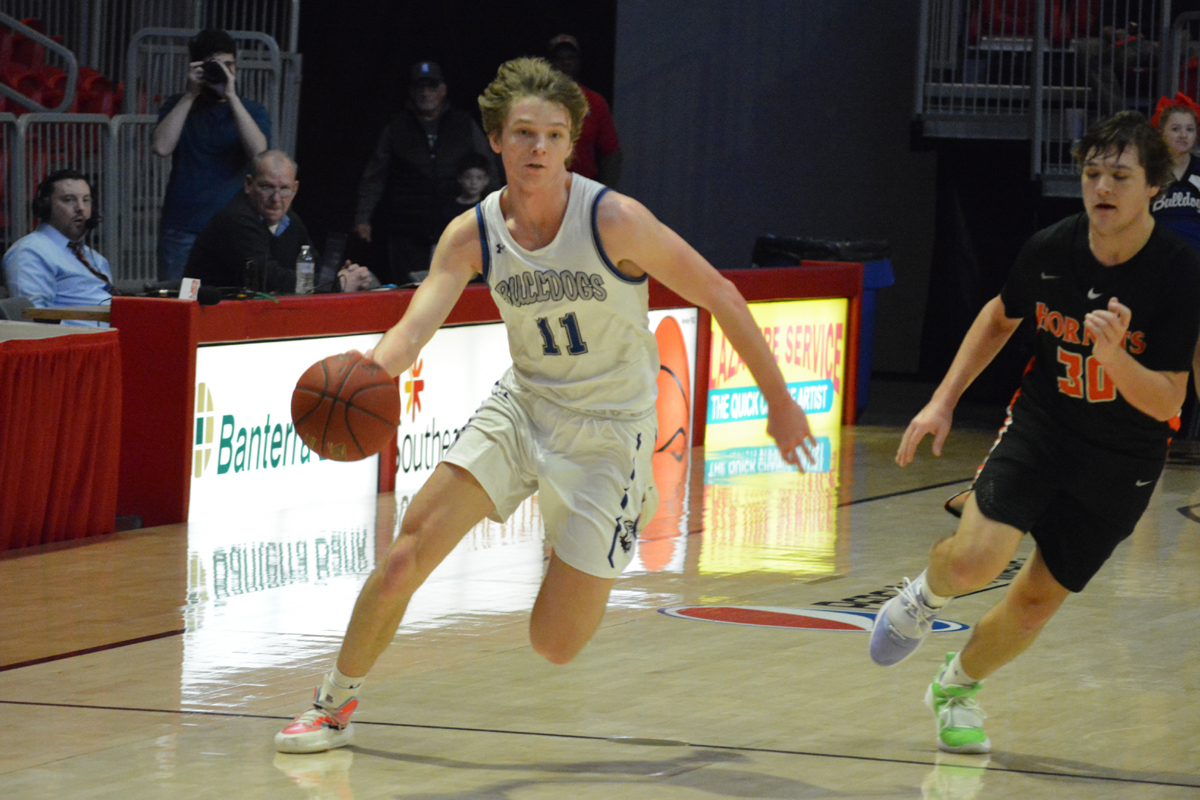 It was far from a perfect performance in the 2021 Southeast Missourian Christmas Tournament, but the Notre Dame boys basketball team proved that once they work out their kinks, they’re going to be a true contender once playoff time rolls around.

Bulldogs head coach Paul Unterreiner led his team to a berth in the fifth-place championship game and a few key wins that carried them into some crucial action on day four.

Heading into the first day of play, Notre Dame received the fourth seed. With losses against Charleston and Jackson coming into the tournament, this was likely a more-than-fair judgment of where the Bulldogs stood heading into tournament play.

However, Notre Dame used this opportunity to prove a few people wrong about where they stood. They did this in fashion on day one, where they opened tournament against No. 13 seed Chaffee.

Notre Dame’s early woes looked to be much-so in the past as they jumped out to a large lead by the end of the first quarter at 31-10.

Scoring was no problem for the Bulldogs in this contest, highlighted by freshman standout Brett Dohogne’s early 4-for-4 performance from beyond the arc. Do-hogne dialed up four-straight from three in the first quarter to put the pressure on the Red Devils as the Bulldogs never looked back.

The true highlight of the contest was senior guard Quin Hunter, who would eventually be named to the all-tournament team — the only Bulldog to do so.

Hunter’s performance in this game was none to scoff at as he dropped 28 points en route to a whopping 85-35 victory over the Chaffee Red Devils on the opening day of the tournament. This set up a matchup with the Kelly Hawks, who were no strangers to quarterfinal upsets.

Quick back-to-back buckets from Brock Clippard and Quin Hunter put the Bulldogs up, 4-0, early into the contest. That would be the extent of their lead, and their only lead, as the Hawks then proceeded to run away with this contest, putting on an absolute show on their way to a shocking upset of Notre Dame.

Kelly scored 17-straight points from that aforementioned point, taking a 17-4 lead and a 21-12 lead into the locker room at halftime.

The faithful Notre Dame crowd was stunned, and the second half never got much better. Cutting it all the way down to six points was Blake Anderson with a buzzer-beating, mid-range dagger to end the third quarter 33-27 in favor of Kelly. The ball didn’t bounce in favor of the Bulldogs in the fourth, however, as they dropped the contest 46-35, relegating them to the fifth-place bracket.

Leading the Bulldogs in scoring once again was Quin Hunter. His 14 points was second among game scorers, only lagging behind Kelly’s Gavin Jansen. These two ended up leading the entire tournament in points scored, with Jansen’s 21 proving unstoppable for the Bulldog defense on night two of the Christmas Tournament.

The Bulldogs had little time to rest and recuperate, however. After a 9 p.m. tip-off against Kelly, they were up-and-at it again at 3 p.m. the next day against the Leopold Wildcats. Leopold was fresh off of its own quarterfinal heart-breaker, dropping an intense matchup against the No. 1 seeded Charleston Blue Jays 61-55.

Notre Dame came out hot right out of the gate, leading 9-2 on the backs of four different scorers — Drew Vandeven, Greg Dennis, Quin Hunter and Reece Callow. However, courtesy of 11 first-half points from Leopold’s Mason Deck and four clutch points from Caleb Schaab, Leopold narrowed the edge all the way down to one later into the first half and five at halftime.

Deck and Schaab, both all-tournament team selections, created serious problems for Notre Dame down the stretch, including a game-high 22 points for Deck and 12 for Schaab. However, when Deck’s unconverted and-1 with 12.1 seconds left came back to the Notre Dame offensive half, it was Hunter’s time to show why his name belonged on every all-tournament ballot.

Tied at 44-all, Hunter squeezed past a tight interior set for the Wildcats and received a lob from beyond the arc, and he laid it home with just nine-tenths of a second remaining on the clock.

Courtesy of a live ball, the Bulldogs walked it off 46-44 over Leopold last Wednesday night. Quin Hunter’s 18th and 19th points proved to be the most crucial of all, sending Notre Dame hurtling into a matchup against an underrated Advance team that had already proven that they could hang with the big boys.

Notre Dame matched up with an Advance Hornets team as scrappy as ever with two all-tournament players in Hayden Laird and Jaren Schrader.

Four lead changes in the first quarter led to a mark of 18-16 at the end of the frame in the Hornets favor, with Jaren Schrader scoring eight points in as many minutes for Advance.

The Hornets took an even heavier lead in the second quarter at 25-20 before a series of traded buckets. Notre Dame’s Drew Vandeven sent the Bulldogs to the locker room down just three, 31-28, off a three-pointer.

The third quarter for the Bulldogs could not have gone much worse. It was scorched-earth for Notre Dame as no shots were falling as the Bulldogs scored just four points. Notre Dame entered the final frame with a 41-32 deficit on-hand as a rally was necessary.

Shockingly, they got exactly that. Over the next five minutes, Cole Bruenderman scored eight points to help the Bulldogs take a 46-45 lead with only a few minutes left to play in the fifth-place championship.

That was until a loose ball was recovered by Advance’s Tyler Davis, taken to the rim and scored on a fastbreak opportunity to put Advance up by one. Notre Dame then had no choice but to allow the Hornets to shoot in the bonus, where Advance made six of their eight from the free-throw line to ice the contest and win 53-49.

With their backs against the wall and down by nearly double digits at the end of the third quarter, Notre Dame almost pulled off the unthinkable against what was perhaps the biggest surprise team of the tournament in Advance and their high-caliber scorers. Both Schrader and Laird exited the game with 20 points apiece for 40 of Advance’s 53.

Though finishing in sixth, the Bulldogs had many bright spots, such as the emergence of scorers like Greg Dennis, Cole Bruenderman and Brett Dohogne.

Notre Dame’s defensive rotations were among the best in the tournament, allowing a phenomenal 44.5 points per game. However, shooting problems must be addressed and will likely be an emphasis of discussion moving into the latter half of the season.

“It was a tournament where we got to see my entire team play,” Coach Unterreiner said. “Got to see what some of the guys who don’t play as much can do. We’ll go back and watch tape to see who deserves minutes.

“Ultimately, we’re not shooting really well and we stopped rebounding the ball really well. Any time you come out of a tournament not even winning fifth-place, we need to come together as a team right now.

“We have to fix that moving into January, because the only thing that matters is the end of the season. That’s what these guys have to understand. These are just games in a tournament — it doesn’t matter. How will we be playing in February?”