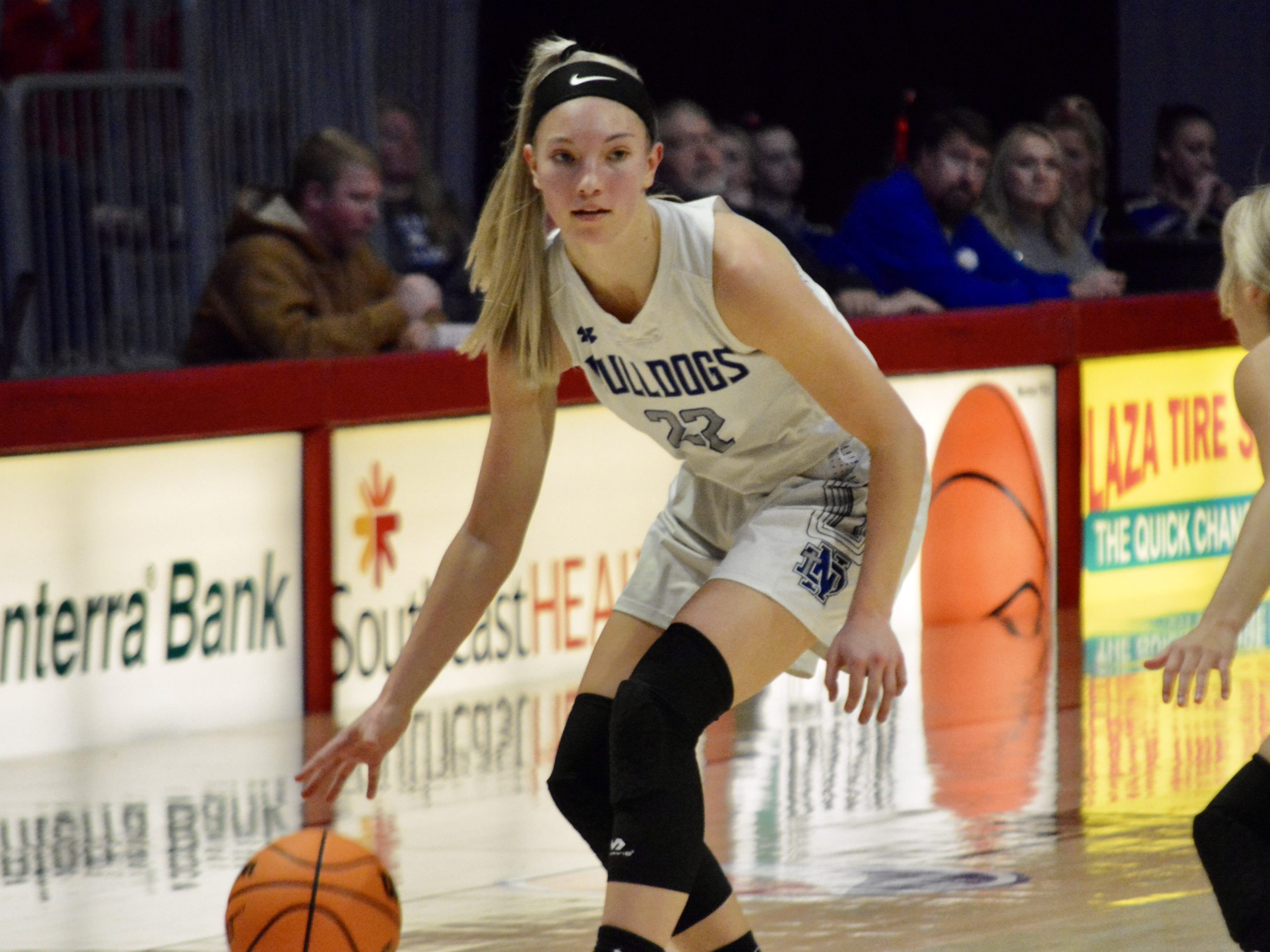 Senior guard Lexi Rubel became Notre Dame’s all-time leader in rebounds by hauling in 13 during the Bulldogs 56-40 win over Vashon on Saturday. Photos by Jay Forness

With only three games left until the start of the Class 5 District 1 Tournament, it’s safe to say the Notre Dame girls basketball team is more than ready for the start of postseason play.

The Bulldogs (17-4), who have already reached their win total from last season, have won each of their last seven games by 16 points or more. Notre Dame notched a 21-point win over SEMO Conference rival Jackson (11-7), 46-25, Thursday on the road, followed by a 16-point victory against Vashon (11-6), 56-40, in the Missouri Sports Hall of Fame Classic Saturday at Cape Central.

“Our rebounding has improved — getting out in passing lanes defensively and our defensive positioning has improved,” Bulldogs head coach Kirk Boeller said. “They’ve played enough with Leah [Jansen] out this year that they’re getting comfortable with their new positions, and they’re getting comfortable with each other. It’s a long season, and it’s a matter of the comfortability they have with each other that keeps getting better and better.”

Senior guard Lexi Rubel made history yet again this season in the Bulldogs win over Vashon, where she registered her 10th double-double of the winter with 21 points and 13 rebounds. Rubel’s 13 boards officially put her at 881 for her career and over Notre Dame 2002 graduate Deana McCormick Ludgwig’s now former all-time rebounds record of 874.

Rubel has come down with double-digit rebounds in 12 of her team’s 21 games so far this season, and she had a career-high total of 24 against Republic in the Nixa Invitational last month.

This is now the second career record Rubel holds for Notre Dame as she broke the assists record earlier last month. On top of that, Lexi is the Bulldogs No. 4 all-time leading scorer with 1,325 career points.

“Breaking the record is a really big honor, and it’s exciting to see my hard work paying off again,” Lexi said. “Rebounding takes a lot of mental and physical toughness. Every time a shot goes up it’s about wanting to get the ball more than anyone else.”

Another key for the 6-footer is her ability to read shots, which Rubel said is something she really excels at. “I can typically tell pretty well if shots are going to be short or long, or where the ball is going to fall. A lot of it is timing, and I’ve gotten pretty good at that, too.”

Currently, Rubel is averaging a double-double with totals of 15.3 points and 10.4 rebounds per game, along with averaging 4.6 assists, three steals and one block each contest.

Lexi Rubel hasn’t been the only key to Notre Dame’s success this season, though, as her younger sister junior guard Tori Rubel has averaged 14.3 points per game through the Bulldogs last six contests. In the last four games, Tori has either been Notre Dame’s leading or second-leading scorer.

Last week on Monday, Tori scored a season and game-high 19 points and recorded a career-high five 3-pointers in a 56-21 win over Dexter. 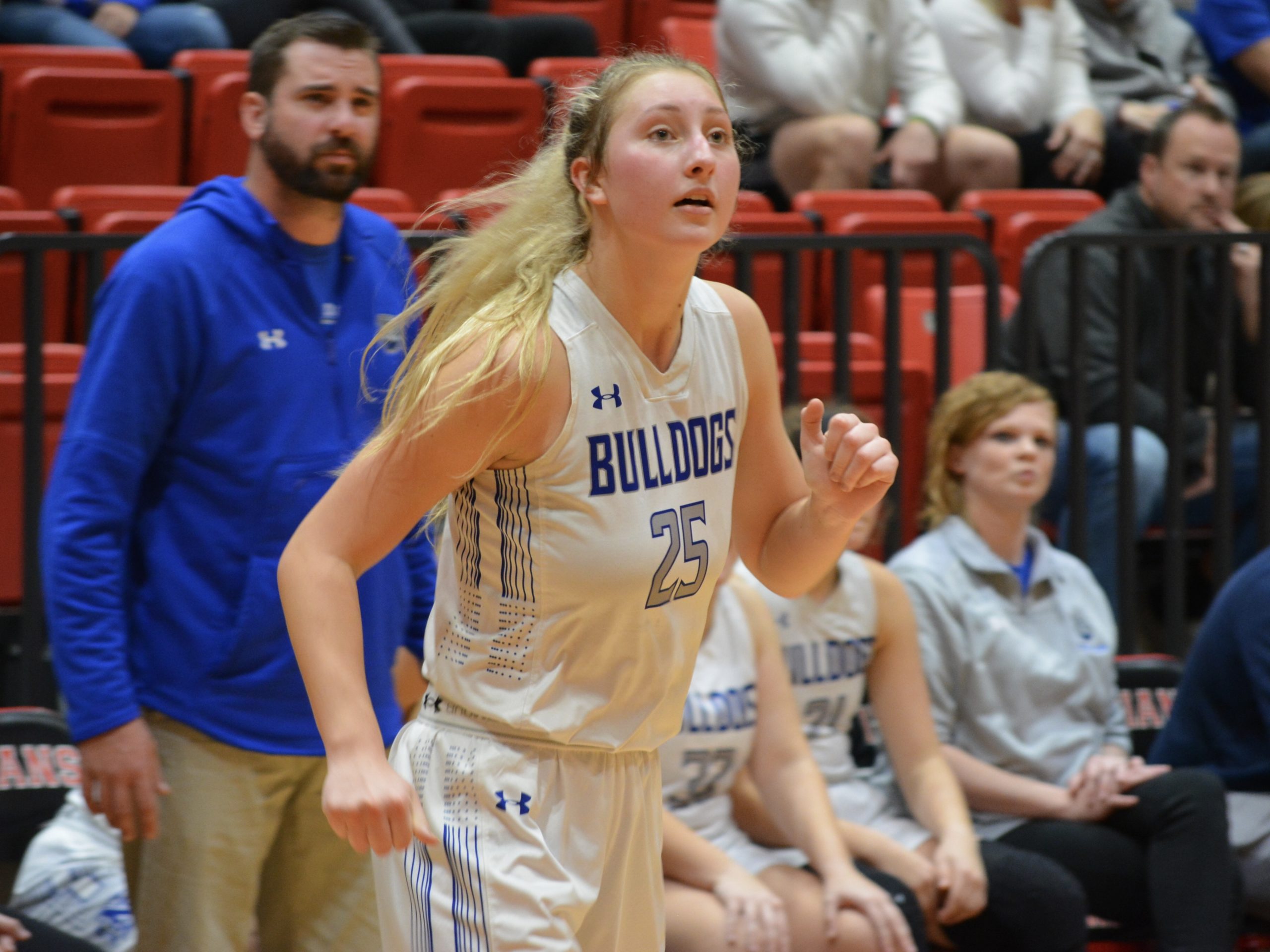 Tori Rubel followed that up by having 11 points, eight rebounds, two assists and two steals versus Jackson, and she went on a 7-0 run of her own during the first half. Ever since Tori has been at Notre Dame, the Bulldogs have a perfect 8-0 record against Jackson.

Following the Jackson game, Tori paced Lexi’s 21 points versus Vashon with 17 of her own, along with eight rebounds and two assists.

“Tori has looked as good as she has in high school over the last four or five games,” Coach Boeller said. “Dominating the glass and making unbelievable passes. I mean ridiculous passes — passes that high school boys aren’t making. She’s making phenomenal passes, and she’s shooting the ball really well.”

Even though Tori is the type of player who usually fills the stat sheet, there are plenty of times where she makes a play that isn’t recorded in the state sheet like when she makes a deflection or forces ball handlers to make a bad pass.

“Lexi benefits from Tori’s length and wingspan because Tori will make passers throw it up for a looping pass, and Lexi is over there to get the steal and assist or layup,” Coach Boeller said. “That stuff doesn’t go in the stat book. Tori is disruptive. She’s disruptive in the nicest, most complementary way possible. She causes havoc on defense — she’s irreplaceable over there.”

Fellow junior guards Anna Garner and Jenna Givens have also played huge roles in the Bulldogs winning their last seven-straight contests. Givens led all scorers in the Jackson game with 17 points and knocked down four threes, while Garner paced The Rubel Duo’s combined total of 38 points versus Vashon with 12 of her own.

Garner and Givens also play vital roles defensively and proved it against Dexter when the two led Notre Dame in steals with five and four, respectively. This was the same contest where the Bulldogs ended the game on a 41-5 run after trailing 16-15, and Garner finished tied with Lexi (11 points) as the second-leading scorer behind Tori (game-high 19).

With Notre Dame’s dominant win over Jackson, the Bulldogs advanced to 7-0 in conference play and only need to beat Saxony Lutheran (8-12, 2-4 SEMO) tonight to sweep the SEMO Conference. Notre Dame won the conference tournament title for the third season in a row with a 50-49 win over Jackson back in December.

“Being one win away from sweeping conference is a testament to the 10 kids on this team,” Boeller said. “They work hard, and they don’t make excuses. I see every day how hard they work, so when they get to go out and do it on a court, it’s pretty special.”

The Bulldogs final two regular-season games will be at Westminster Christian Academy (15-5) Friday and Whitfield (15-3) Tuesday at home. The defending Class 5 State Champion Whitfield Warriors beat Jackson by 15 points at 44-29 on Saturday.