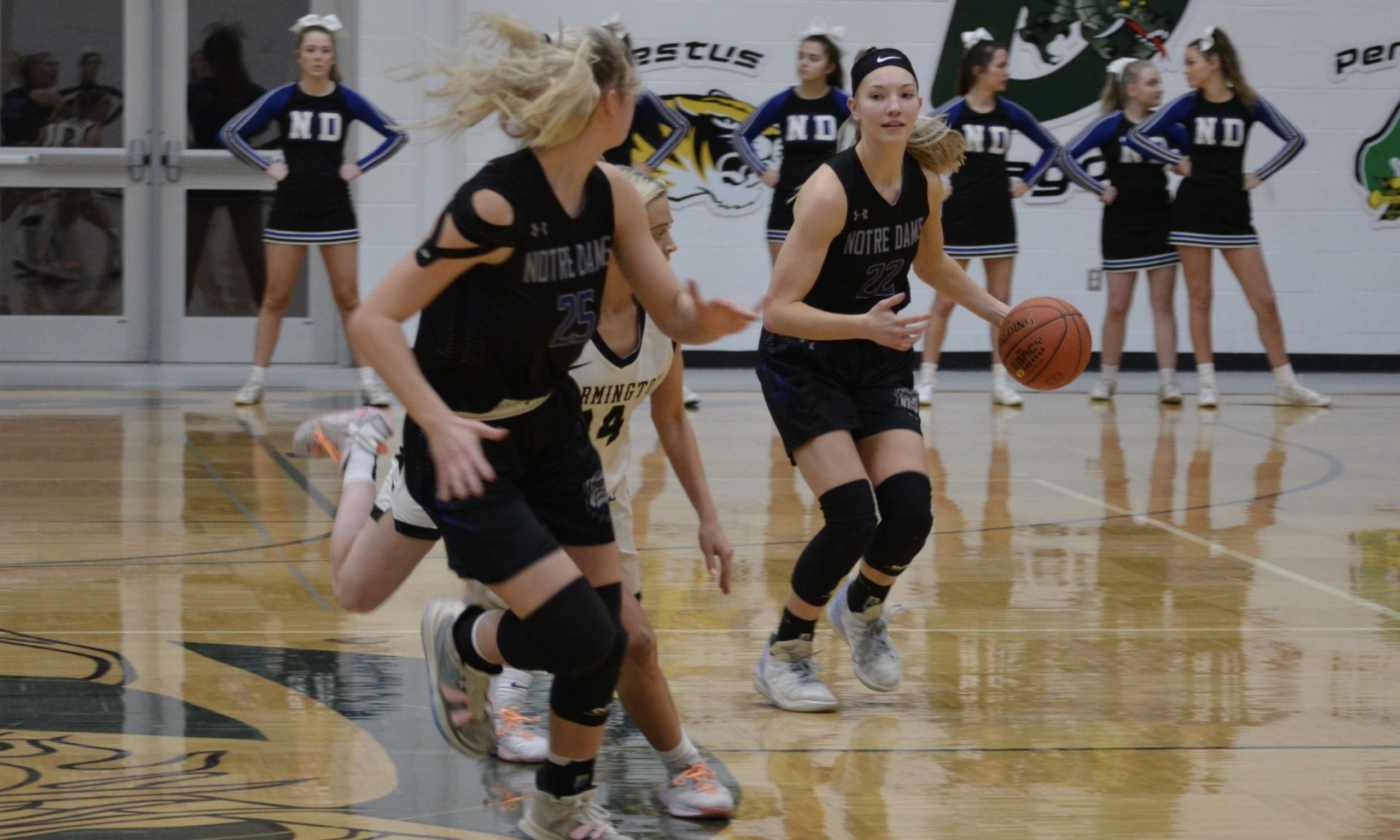 The Rubel Duo — junior Tori Rubel (left) and senior Lexi Rubel (right) — combined for 23 of Notre Dame’s 27 points in the Bulldogs 41-27 loss to Webster Groves in the Class 5 Quarterfinals on Saturday at Meramec Community College. Photo by Nick McNeal

Unfortunately, Saturday was the end of an era for the Notre Dame girls basketball program as one of the best players to ever wear a Bulldogs uniform suited up in her final game.

This was Notre Dame’s two-time all-state senior guard Lexi Rubel, who finished her career as the Bulldogs second all-time leading scorer and overall leader in assists, rebounds and steals.

With a trip to the Class 5 Final Four on the line, Rubel and Notre Dame (22-7) fell to Webster Groves (24-5) at 41-27 in the quarterfinals on Saturday. The Bulldogs had fallen to the Statesmen earlier this season at 45-40 in the third-place game of the Nixa Invitational in January.

Not only was this Rubel’s final basketball game at Notre Dame, but it was also the final high school contest The Rubel Duo — made up of Lexi and her sister junior guard Tori Rubel — will play in together. The duo combined for 23 of the Bulldogs 27 points as Lexi produced 13 and Tori 10.

Outside of Lexi and Tori Rubel, Notre Dame only had two other players score as junior guards Anna Garner and Jenna Givens each finished with only two points. The Bulldogs only made 23.8% of their field-goal attempts and were 11.8% from 3-point range as Lexi and Tori were Notre Dame’s only players to make a three.

“This wasn’t how we wanted this season to end,” Notre Dame head coach Kirk Boeller said. “You have to credit Webster Groves — they sped our offense up and made it difficult on us. We could go play 50 more games and not shoot like that again.”

The Rubel Duo just had a combined two 3-pointers as Tori swished her triple to beat the buzzer and give Notre Dame a 11-8 lead to end the first quarter. Lexi’s lone three of the game also came in the first eight minutes of action.

Notre Dame led for a majority of the second quarter until Statesmen senior guard Ellie Paloucek answered Lexi Rubel’s and-1 with one of her own. This gave the Statesmen a 21-20 lead heading into the locker room, which was a lead they held for the remainder of the contest.

Tori Rubel made it a four-point game, 31-27, at the beginning of the fourth quarter after the three-year starter went on a 4-0 run of her own. Tori had an offensive putback to end the third and then drained two free throws at the start of the fourth.

Tori’s two free throws were the final points of the season for Notre Dame, however, as Webster Groves went on a 10-0 run to end the game with six of those points coming from the free-throw line.

Defensively, the Bulldogs had their hands full with a future Power Five talent in Kansas State signee senior forward Eliza Maupin, who finished with 14 points. Fellow Webster Groves senior Paloucek scored a game-high 15 points as she went 4-of-6 at the free-throw line in the fourth quarter.

Statesmen freshman forward Ainsley Kniker also produced double-digit points for Webster Groves as she finished with 10 and went 2-for-2 at the charity stripe in the final eight minutes.

Maupin scored 10 of her 14 points in the first half as she was nearly kept quiet during the second half by a fellow future Division-I talent in Tori Rubel. Rubel did so by mirroring her every movement as well as contesting shots to force misses and rejected one shot as well.

“I thought defensively we played as well as we have all year — just didn’t bounce our way,” Coach Boeller said. “Everybody that was on the court was aware of where those kids were. We didn’t have a weak spot on defense today I didn’t think. I was proud of them for that because Webster Groves has some good players.”

Things were difficult for Notre Dame and Lexi Rubel when Tori was on the bench since this allowed Webster Groves to double team the future UT Martin Skyhawk. This caused Notre Dame’s offense to stall as Lexi only scored two points in the second half, while Tori Rubel came up with five in the span.

“I’m blessed to even have my name mentioned in the same paragraph as this group of seniors,” Coach Boeller said. “Players like Lexi don’t come along often, and she’s one of the best players this school has ever had. Her numbers and work ethic show it, and she’s earned everything she’s gotten. I wish we could’ve made the final four for her, but I’m blessed to have coached these kids.”

Tori Rubel came down with a team-high eight rebounds for Notre Dame as five were on the defensive end against the 6-foot-2 duo of Maupin and senior forward Sophia Nittinger inside the painted area. Tori, who is 6-1, also dished out two assists and had one steal while only having one of Notre Dame’s 13 turnovers.

What makes Tori Rubel’s performances this postseason more impressive is that the junior has been playing through a shoulder injury she suffered in mid February. Rubel missed the final two games of the regular season, but then she helped the Bulldogs win their fourth-straight district championship and make their fourth quarterfinal appearance in a row.

“Tori is one of the strongest people I know with everything she’s gone through,” Boeller said. “I don’t know how her rehab process will be, but nobody is mentally stronger than she is. You don’t coach it, you don’t teach it — that just comes from good parenting and a great family.”

Like Lexi, Tori Rubel also received an offer from UT Martin. She is currently uncommitted, though.

Tori will return for her final season at Notre Dame next winter along with fellow starters Garner and Givens. The Rubel’s younger twin sisters Brie and Kate, who led Immaculate Conception to win a sixth-straight Parochial League A-Team Tournament Championship this winter, will be freshman next season.

“For those three to have this experience and with the talent we have coming up — it’s time for them to be leaders next year,” Coach Boeller said. “I’m excited for that.”