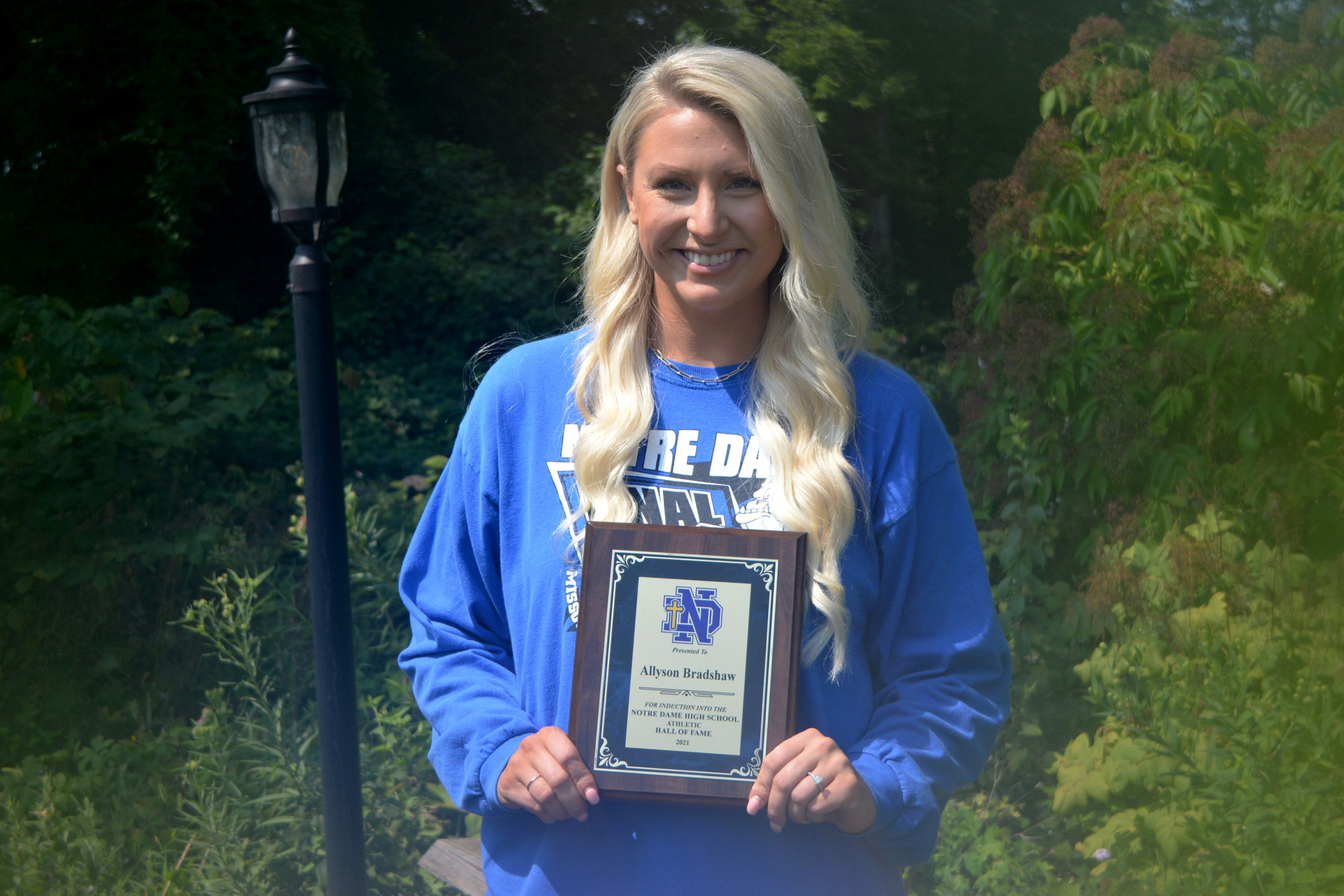 Ten years after her illustrious high school career came to an end, Allyson Bradshaw was rightfully inducted into the Notre Dame Athletics Hall of Fame last month on June 12.

Bradshaw was a three-sport athlete for the Bulldogs and helped lead the girls basketball team to the 2010 Class 4 State Championship game. She also helped the volleyball team make back-to-back Class 3 Final Four appearances in 2009 and 2010.

The third and final sport Bradshaw played while at Notre Dame was soccer, which won two-consecutive district championships her sophomore and junior year.

“For me, I was so used to playing three sports because I did that forever, so I was just bouncing from one to the next,” Bradshaw said. “I don’t want to say it wasn’t challenging because it is when you’re going nonstop all the time, but I kind of thrived on that.”

After graduating high school in 2011, Bradshaw continued playing basketball at her hometown university Southeast Missouri State, where she ended her career as the Redhawks third all-time leader in 3-pointers with 163. Allyson was only 11 threes behind Julie Meier’s (1991-95) all-time record of 174 career triples.

Being inducted into Notre Dame’s Hall of Fame was gratifying for Bradshaw since it’s been something she’s kept track of ever since she graduated high school.

“It was always in the back of my mind, ‘Was this something I worked hard enough or was good enough for?’” Bradshaw said. “When [athletic director] Jeff Graviett reached out, I was like, ‘Oh my gosh! I am. I did work hard.’ I thought it was really special and a huge honor.”

On the basketball court, Bradshaw was a four-year starting point guard for the Bulldogs as she garnered Class 4 All-State honors her final two years. Allyson helped Notre Dame win 63 games her last three seasons on the hardwood, and she finished as the program’s fourth all-time leading scorer with 1,308 career points.

Starting as a freshman helped Bradshaw become the person she is today because she learned from the upperclassmen to always help others — especially younger people. At the beginning of her freshman season, Allyson said she was playing scared all the time and didn’t talk much, which wasn’t like her.

“For anybody, if you’re going from one level to another, you think you’re at the top then all the sudden you get bounced back down real quick,” Bradshaw said. “The upperclassmen were really good to me and brought me into my element.

“It taught me, ‘As I grow up, this is how I’m going to treat younger kids because I don’t want to treat the underclassmen like they’re nothing or I’m better than them.’ You want to be that person to build them up and make them feel comfortable because in the end that’s what you want. You want your teammates to do well.”

Bradshaw stated that basketball season was her favorite time of the year because those teams were always a lot of fun to be around — even on the worst days.

Allyson remembered one practice in particular where her high school head coach Renee Peters continually used the word “again,” which was a phrase she picked up after they all watched the movie “Miracle.”

“One day we came to practice, and it was a horrible practice,” Bradshaw said. “We were just running, running and running, but after we got done we were all just able to laugh and have fun with each other. That’s why basketball was so enjoyable to me — the people, the team and the coaching staff. It was honestly like a family.”

Bradshaw and Notre Dame faced Webb City for the Class 4 state title in the 2009-10 season and only fell by seven points, 60-53, for the Bulldogs to record their fifth all-time state runner-up finish. Despite not coming away with what would’ve been Notre Dame’s second-ever state championship (won in 2001), Bradshaw said it was a dreamlike experience.

“All of the people, the big court [at Mizzou Arena], the nice locker room and you’re treated kind of like royalty,” Bradshaw recalled. “It was everything that you imagine. That level of play for me was whenever I first started to think, ‘OK, this is getting closer to what college is probably going to be like.’”

After making it to state, Bradshaw and the Bulldogs fell to Dexter in the district championship game her senior year. Allyson said she still thinks back to that game all the time and not because of dissatisfaction — she has quite the opposite feeling, actually.

Bradshaw said it was the proudest moment of her athletic career because it was a game where she gave everything she had and played her absolute best. The Notre Dame Hall of Famer ended her high school basketball career with no regrets, and she also had an unforgettable moment when she was taken out at the end of the game.

“When I walked towards the bench, I laid my head on Coach Peters’ shoulders and just stood there,” Bradshaw said. “I took a deep breath and thought, ‘I know we lost, but I can’t be mad or feel bad about myself.’

“I remember feeling so proud of myself, ‘Wow, that’s what it feels like to work that hard.’ If you work hard, you can’t feel bad after it because if you give it your all, there’s nothing else you can do. I want to have that feeling in everything I do.”

At SEMO, the coaching staff Bradshaw played for led by Ty Margenthaler, who is now the associate head coach at Saint Louis, had her transition from being a do-it-all point guard into a shooting guard. Allyson said she didn’t realize she was that type of shooter until college.

“It was a mindset thing for me because whenever I came in — again going from being a top dog to the underdog —I was like, ‘Oh, I can do it all,’” Bradshaw said. “I had to learn, ‘Oh, that’s probably not my role on a team anymore.’ They changed my shot and footwork, and I was in the gym nonstop. That’s what I had to do if I wanted to play. Get my shots up and figure out that role.”

If Bradshaw has any advice to give prospective women’s college basketball players from Southeast Missouri, it would be to not let the pressure get to them.

“To me, I did. I felt a lot of pressure,” Bradshaw said. “I was the hometown girl, and I felt like there were a lot of eyes on me. I wanted to have a supportive community and play in front of the people I know, but at the same time you start to feel that pressure.

“I thought, ‘All of these people are going to watch me, and I’m not the same player I was at Notre Dame.’ So I would say don’t let the pressure of that and people’s expectations get to you.”