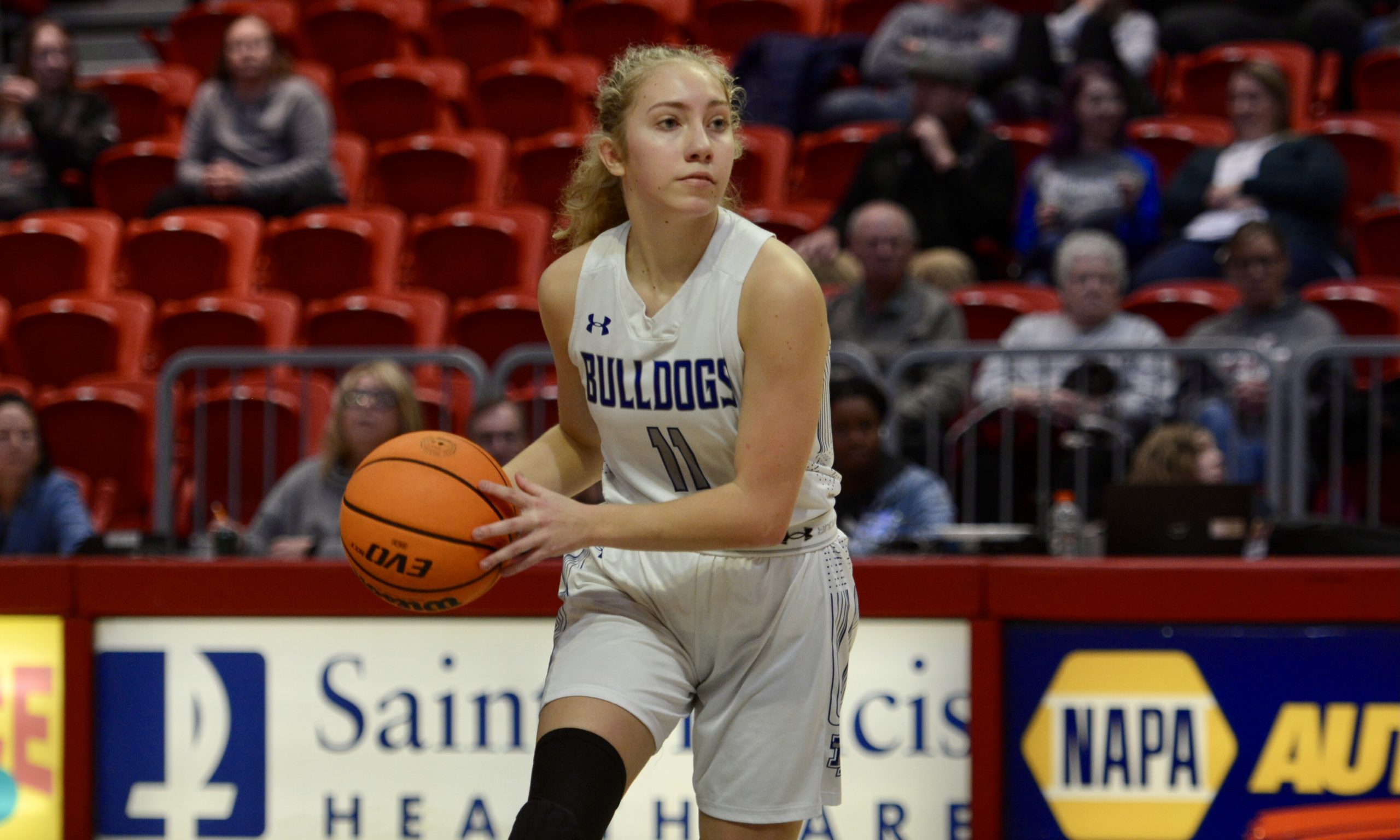 Upon watching her play, one can notice Rubel remaining completely even keeled while sporting an unbreakable, straight-faced expression throughout the entirety of any game.

“I don’t really ever think about much when I’m out there,” Brie said. “I just take it play-by-play, quarter-by-quarter and so on. If something goes wrong or I mess up, I try to forget about it and just make up for it wherever and whenever I can.”

As a full-time starter with not one but two Division-I offers (Abilene Christian and UT Martin), Brie has been one of the keys to the Bulldogs perfect 8-0 season thus far. Notre Dame has now beaten each of its opponents by an average of 22.6 points per game en route to winning two tournament titles.

On Tuesday night at Oran, Brie had a game to remember despite the contest ending with a running clock. The 5-foot-9 point guard seemingly couldn’t miss from beyond the arc as Rubel knocked down a career-high five 3-pointers for a career-best 18 points in the Bulldogs 68-29 win over the Eagles.

However, making the night even more memorable for Brie was that she combined for 37 points with her older sister in Notre Dame 6-1 senior guard Tori Rubel. Tori led all scorers with 19 points — having 13 in the third quarter — as she hit two 3s of her own and finished with a double-double as she also came up with 11 rebounds.

The last time Brie and Tori played organized basketball together prior to this season was back when they both attended Immaculate Conception back in the 2018-19 school year.

“I’m definitely enjoying getting to play with Tori again,” Brie said. “It’s really special to get to be out there with her on the court, so to have had a game like that with her really is special.”

“I think that since Oran really packed it in and we weren’t able to get so many buckets from inside the paint, we were able to pass the ball around and that’s how we got so many good shots from around the perimeter,” Brie said. “Our whole team usually stays after practices, and we just get shots up. Even during practices our coaches have us do different shooting drills to get shots up and practice that way, too.”

This was also, of course, Brie’s best game from 3-point range all season as she finished shooting 71.4% from behind the arc. Heading into the contest, Rubel had only made 18.1% of her 3s, but she’s now made 70% of her treys in the Bulldogs last two games. “Over Christmas break, I worked a lot on my shot with lots of repetition and just getting into the flow of the game,” she said.

Through Notre Dame’s eight games, Rubel and the rest of the Bulldogs have put their unselfish style of play on display. Three different players have been Notre Dame’s leading scorer while all five starters have scored double-digit points multiple times.

Tori Rubel is the Bulldogs top scorer with an average of 11.9 points per game, and she’s also the team’s top rebounder (7.5 per game) and 3-point shooter (14 3s). Brie paces Tori in scoring with 8.9 points per contest as Kate is closely behind her twin sister at 8.3, while Lucious (7.4) and Garner (6.4) round out the top five.

Against Oran, Notre Dame finished with a season-best 20 assists as a team with Kate dishing out five, Brie four and Tori three. The Rubel sisters also happen to be the Bulldogs top-three leaders in assists as Brie is averaging a team-high 3.5 assists per game, while Kate and Tori pace her with 3.4 and 3.3, respectively.

“During practice, we do a lot of passing drills — there’s one drill where it’s a shooting and passing drill that we end a lot of practices with,” Brie said. “We work on driving to the paint and kicking the ball out to either get a shot or one more shot.

“Everyone on our team can shoot the ball well, and we’re all good passers. Since we know that everyone can shoot, we’ll give up a good shot for a great shot. I think having unselfish players who can pass is a good combination to have.”

Along with having a balanced scoring attack, Notre Dame has yet to allow an opposing offense to score more than 30 points (26.8 per game).

The Bulldogs closest game all season ended up being a 40-30 win over Jackson to win their fourth-straight SEMO Conference Championship on Dec. 2. Notre Dame and Jackson faced off 20 days later in the Holiday Classic title game, where the Bulldogs won by 16 points this time around at 46-30.

Brie is the type of defender who gets after players one-on-one by swiping for the ball and picking their pockets for easy fast-break scores by her or via a pass to an open teammate.

Rubel, who has recorded four or more takeaways four times already, leads the Bulldogs in steals with 3.1 per game, while Garner is behind her with an average three and Tori is third at 2.8.

“There is a definitely a learning curve with the defense we play,” Brie said. “It’s brand new to pretty much our whole team besides Anna and Tori. I think that we have improved quite a bit since the beginning of the season.

“We had really only played our defense on one type of offense, and coach [Kirk Boeller] has been working with us defensively to adjust to different offenses we might face with different teams. Everybody works hard to learn the positions of our defense and what we need to do.”