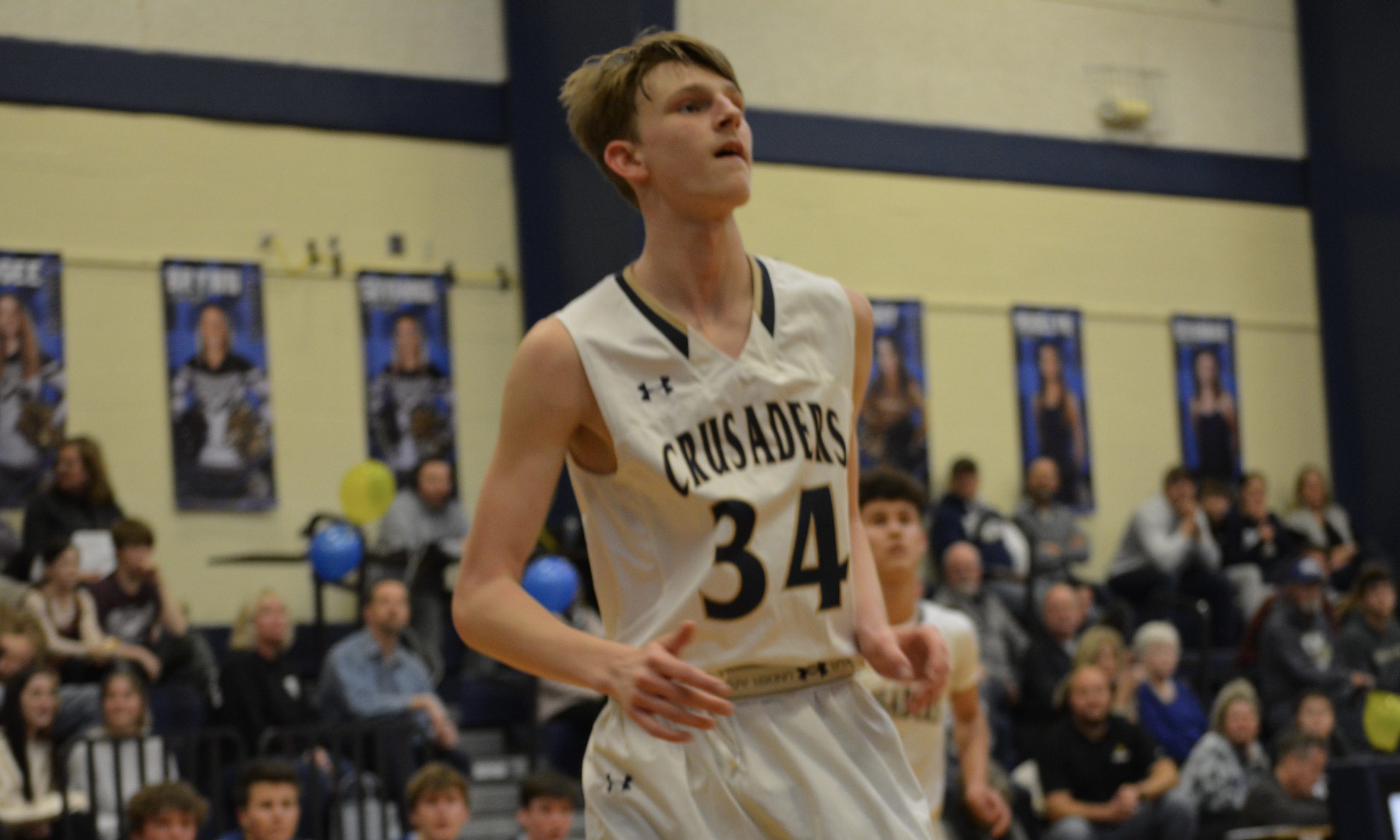 Even though the Crusaders weren’t able to break what is now a four-year drought of not winning a district title, they still produced their best record since the 2017-18 season at 19-8 overall.

However, Saxony graduated three starters from that team in forwards Wilson Lodge, Logan Pruitt and guard Will Eldridge. Lodge, who was the Crusaders leader in points (13.3 per game), rebounds (6.9), steals (2.0) and blocks (1.0), is now playing college basketball at Division-III Illinois College.

Eldridge was Saxony’s third-leading scorer with 9.4 points per game while hitting the most 3-pointers at 36 as he knocked down 31.9% of his shots from beyond the arc. He was also second in assists (2.2 per game) and steals (1.8).

“We did lose some really good seniors headed by Wilson Lodge there, obviously,” Saxony head coach Justin Callahan said. “He was our big man inside and a two-time all-district player. We’ll miss the other ones, too.”

The Crusaders bring back two starters, though, as well as several other players who saw action in at least 22 games last season. The two returners to Saxony’s lineup are senior guard Max Richey and junior forward Luke Eggemeyer.

Richey not only started all of last season at point guard but also the second half of his sophomore year, which was when the Crusaders made their first district title game since 2018.

Even though Richey’s points per game total wasn’t ideal last season at 3.0, he was busy distributing the ball as averaged a team-high 3.3 assists each contest. Max also came up with 1.5 steals (third most) and finished shooting 35.3% from 3-point range (second highest percentage).

Richey will be relied on heavily to start the year as both a scorer and passes since Saxony’s returning leading in points per game Eggemeyer will miss the first four to six weeks of the season with a foot injury he suffered playing soccer.

“The point guard position is just so important, so having him back is extremely nice,” Coach Callahan said. “We had a lot of talent last year, so he didn’t need to do a whole lot of scoring, but I’d like to see him be a little bit more aggressive.

“Point guards don’t have to be big scorers because you want someone who can distribute the ball, but I feel like for us to really be effective we need more out of him trying to attack and being a little more selfish.”

As a sophomore, Luke paced a current college basketball player in Lodge with 12 points and 4.8 rebounds per game. He also finished second in threes behind Eldridge with 25 (30.9%) along with 1.9 assists and 1.8 steals per game.

When Eggemeyer does step onto the court for the first time this season, though, Coach Callahan is excited to see how Luke can improve off the all-district sophomore campaign he had last winter.

“I’m looking for big things out of him — he had a really good summer playing with us and in AAU, so he played a lot of basketball,” Callahan said. “He’s ready to really come into his own this year. From the end of the season last year to the end of the summer this year, you could really see more progression. He’s really ready to do some big-time things.

“Luke can legitimately play [positions] one through five, and he did last year. He’d bring the ball up for us like a point guard, but he has perimeter skills, ability to shoot the ball and handle the ball like a two or three.

“For us with his size, he’ll probably play more in the post. He can step out and do things as needed. Defensively, he’s able to get up very high. He’s an intimidator inside and can block shots. He’s a complete player.”

Even though he wasn’t a full-time starter, another key player coming back for Saxony this season is junior guard John Hartmann. He produced 6.6 points and 1.8 assists per game while making 24 3-pointers (32%) coming off the bench his sophomore year.

“Hartmann has worked as hard as a kid can possibly work to get better, and he played with us and also Luke in AAU this summer,” Callahan said. “I think he’s also really ready to come into his own, so I’m expecting big things out of him.

“The AAU team they played on is really competitive, and they played all over with kids from Cape and Jackson. Them playing together with those other kids gives them some really good experience and there’s no doubt it’s going to pay off.

“John has been getting in the weight room and has improved so much athletically with this skill. When people see him this year, they’re going to see a difference.”

Two other players who will factor into the rotation are seniors guard Landon Ochs and post Aaron Zoellner. These two were instrumental to the Crusaders boys soccer team’s final-four run as Zoellner is the goalkeeper, while Ochs was one of the defenders.

“Ochs got to play quite a bit last year, and he was a very athletic kid coming off the bench,” Coach Callahan said. “Landon has had some injury problems, but he’s such a good athlete and jumps so well. I think he’s put some time in on his own, and I know he’s always working to become more athletic.

“Zoellner was a big post player for us last year, and he played with us this summer. I think he’ll be a force inside — he’s a big, strong young man. With Lodge and Pruitt gone, we’re going to really need Aaron to step up and get big inside. We need him to lead us in rebounding and get trash buckets — putbacks off of offensive rebounds.”

Coach Callahan is excited to see how a player like sophomore Ethan Bohnert can step up for his team after primarily playing on the junior varsity squad as a freshman. He didn’t get to play a lot, though, since he was dealing with injuries throughout the year.

“Ethan is really strong and has a physical body, but he’s had some bad luck with injuries,” Callahan said. “If he can stay healthy, I’m really looking for big things out of him because he attacks the basket so well.

“When he handles the ball, it’s really hard to take it away from him, and he’s extremely aggressive defensively. He’s so intense, and he played all summer with us and really had a good summer. If he does stay healthy, look out. I think people will be really pleased to come watch us play.

“He’s worked extremely hard on his shooting, and he’s really a student of the game. He has a more natural look to his shot, so if he can also shoot along with his ability to attack, he could potentially be something really special.”

Four other sophomores outside of Bohnert that should see playing time are Owen Buchheit, Wesley Kiehne, Austin Hunt and Jackson Wilson. This bunch will play both J.V. and varsity, but some of them could have to primarily play varsity due to injuries.

“When you go down that lineup and look at those five guys that played last year have all played a lot of basketball,” Callahan said. “We’ve got some skill, and once we get Luke back, I think we can compete.

“I don’t think we can deny that without him we’re definitely not as good, so we need him to get healthy and get in there as soon as possible. In the second part of the year with Luke back, we can play at a pretty high level I’m hoping.”