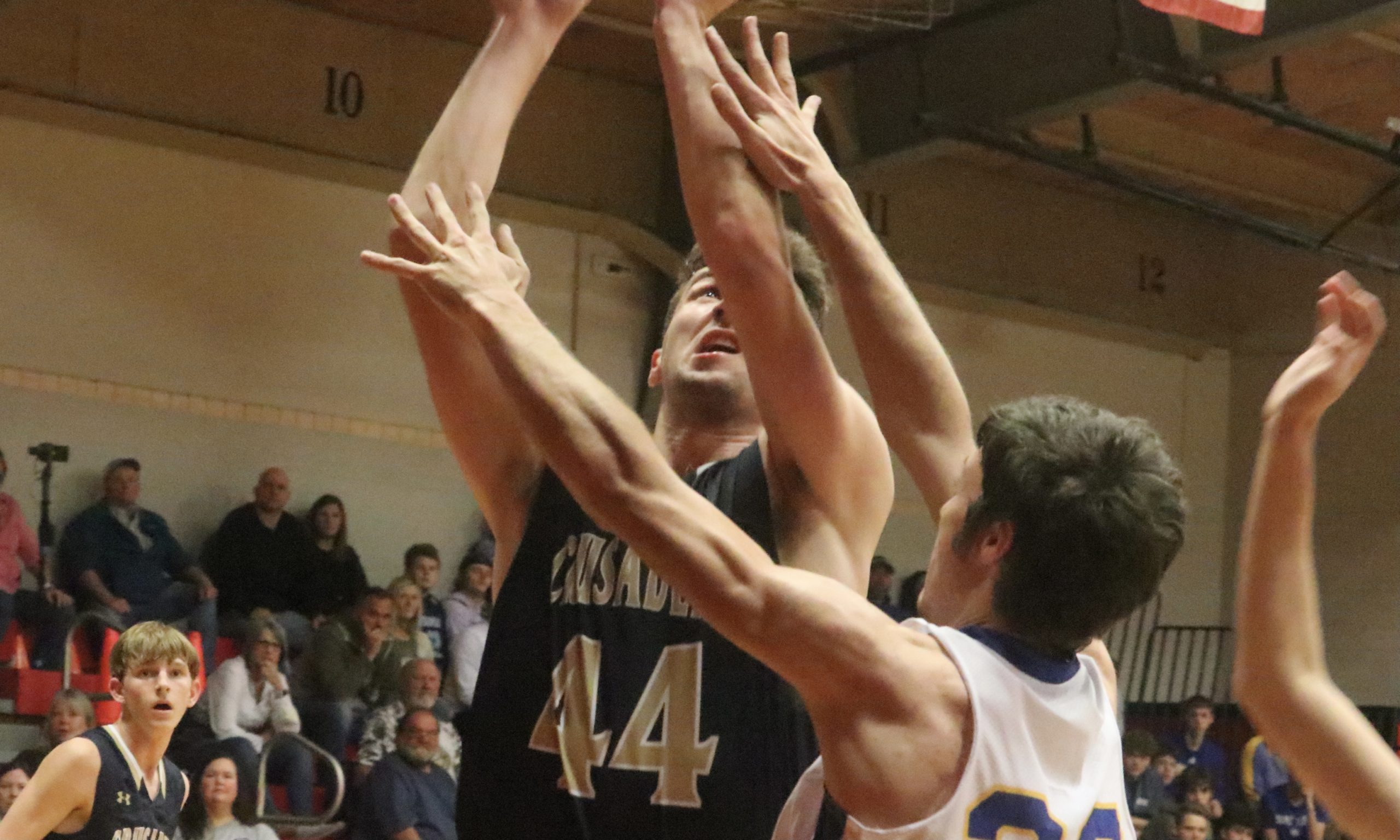 Saxony Lutheran senior forward Wilson Lodge was one of the four Crusaders to score double digits (10) in their 62-42 win over St. Vincent in the Rolla “Duke” Herbert Tournament Third-Place Game on Friday night at Crystal City. Photo by Justin Hotop

The annual Rolla “Duke” Herbert Tournament was back in full swing after a one-year hiatus last winter, which is a tournament the Saxony Lutheran boys basketball team has won four times (2013, 2015-17).

However, the Crusaders were unable to make the championship game for the second-straight time, but they were able to win the third-place game after falling in it two seasons ago.

Leading Saxony and the game in scoring was senior guard Will Eldridge, who scored 21 points and three of his team’s five 3-pointers. Eldridge also shot well in the perimeter throughout the night and went 2-for-3 at the free-throw line in the fourth and final quarter.

“St. Vincent runs a 1-3-1, and we knew that so you have to be able to knock down shots,” Saxony head coach Justin Callahan said. “We had Will and John Hartmann shoot well, and John hit four threes the other night. Those two hit big shots early and got a little confidence. We only had five threes for the game, but we’ll take it.”

In the semifinals, the Crusaders fell to a No. 3 seeded Seckman team, 63-55, that went on to 30-ball No. 5 Herculaneum 81-49 for the 2021 Rolla “Duke” Herbert Tournament Championship. Herculaneum defeated St. Vincent 48-44 to reach the title game.

“I feel really good — it’s a little bittersweet. If we could’ve made free throws the other night, I think we would’ve been playing for the championship,” Coach Callahan said. “We went 11-for-19 tonight, but overall beating a St. Vincent team that’s pretty close to us feels really good. They beat us twice last year.”

Pacing Eldridge in scoring were the likes of fellow senior forward Wilson Lodge with 10, while sophomore forward Luke Eggemeyer and sophomore guard John Hartmann scored 13 and 11, respectively. Eggemeyer finished tied as the game’s second-leading scorer all while coming off the bench.

“I really do have eight players that could start — I really do. We’ve started the same lineup each time, but I could easily switch that around,” Coach Callahan said. “As we go through the season, I’ll probably mix it up a little bit depending on who we play.”

The game was neck and neck until the Crusaders started pulling away in the second quarter and outscored the Indians 8-2 for a 31-23 lead heading into the locker room. St. Vincent senior guard Evan DeWilde hit his third and final 3-pointer coming out of the locker room to make it 31-26, and he finished with 13 points before fouling out of the game.

Saxony then answered DeWilde’s three with a 8-0 run, where Lodge went on a 4-0 scoring run of his own. Lodge had only scored four points in the entire first half.

“Lodge missed a couple of gimmes we would’ve liked to have had, but when he’s in there he just fights and rebounds well,” Callahan said. “He’s just an enforcer on the inside and has some skills on the inside.”

The Crusaders only lost their double-digit lead once after going up 39-26 with their scoring run, but they then outscored St. Vincent 16-2 in the fourth quarter to secure third place.

One other Saxony player was close to recording double figures in the scoring column as well as senior Logan Pruitt finished with eight. Pruitt scored four of the Crusaders 14 points in the third quarter.

Even though a player like junior guard Max Richey only finished with two points in the contest, he was vital in Saxony’s scoring attack by distributing the ball for most of the night.

“Max just does such a good job. The points aren’t really what I need from Max,” Coach Callahan said. “I need him to handle the ball, penetrate, kick out to shooters and get them open shots. Every once in a while he’ll pull-up and hit one, but he needs to distribute the ball for us. He does a good job of that.”

The Crusaders (2-1) have five more games until their next tournament, which will be the Valle Christmas Tournament from Dec. 27 to 29. In the span, Saxony will face off against Ste. Genevieve Dec. 7, Farmington on Friday, North County on Tuesday, Arcadia Valley Dec. 17 and Doniphan Dec. 21.

“Things do not get any easier with our upcoming schedule. Farmington and Ste. Genevieve are both very good basketball teams,” Callahan said. “Over the summer, Ste. Genevieve beat us probably worse than anybody. We had a really good summer, but they beat us. We know we’ve got our work cut out for us. We’re working on being on the same page.”