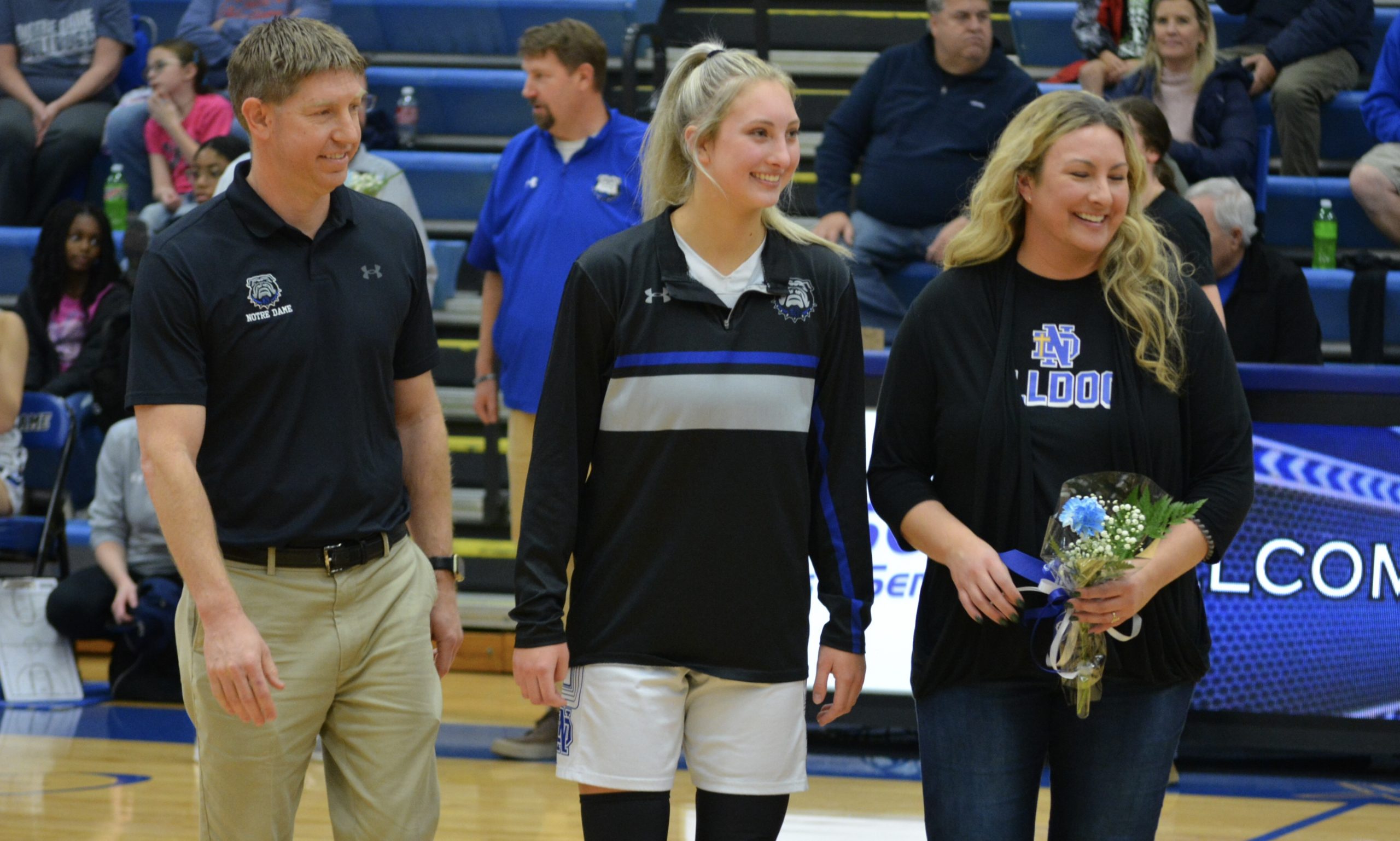 While last Monday was primarily about the Notre Dame girls basketball team celebrating its two seniors on Senior Night, it was also a time for the Bulldogs to avenge their first loss from last season.

This was one of the things on 6-foot-1 senior guard Tori Rubel’s mind entering what would be her final contest against Delta, which she described to have the same atmosphere as a district championship game.

In what was a back-and-forth affair through the majority of the game in a mostly-full gym at Jerry Grim Court, Rubel led Notre Dame to go on a 16-3 run in the fourth quarter as she was “dissatisfied” with the first 24 minutes after the Bulldogs only led 32-30.

“With the crowd support, people came out and gave us energy when we didn’t have it,” Tori said. “That was just a really fun game to play in and Delta gave us their best, but we knew they would. Having our student section come out to support us really meant a lot.

“I wasn’t satisfied [entering the fourth quarter] at all with how I’d been playing or how the game was turning out. I was like, ‘OK, last eight minutes, let’s give it our all and put everything out there.’ We had so many players step up tonight, and I feel like this game was also really good for our chemistry and our bond. In the fourth quarter, we were just ready to finish the game.”

This led the Bulldogs (10-1) to a 53-46 win over last year’s Class 1 state runner-up Bobcats (12-2) as Tori nearly produced a triple-double in the contest, finishing with 12 points (two 3-pointers) and a season-high 14 rebounds and seven assists.

Rubel’s off-the-charts basketball I.Q. and unselfish style of play led Notre Dame to have three other players finish with double-digit points as her younger sister 6-0 freshman guard Kate Rubel produced a game-high 13 on top of her two assists and two steals.

Also scoring in double figures was Tori’s fellow senior 5-7 guard Anna Garner as she also recorded 12 points, along with having four assists and two steals. The fourth and final Bulldog to score 10 points was 6-2 freshman post Nevaeh Lucious as she came down with seven rebounds as well despite fouling out in the fourth quarter.

Tori, who has played basketball since the first grade, has been teammates with Garner ever since the two of them attended Immaculate Conception together. Rubel said she has players and a friend like Anna to thank for where she’s at in her basketball career today.

“This win by far has been the most special one for us this season since it was Senior Night, and it was our revenge game on Delta from last year,” Tori said. “Anna and I grew up together, and we’ve always played together. We’ve been together from the very beginning, and now we’re going to finish together, too. That’s really special to me because I love playing with her. Whenever I get a little worked up, I just look at her and I’m like, ‘OK, it’s good. We got this.'”

Lucious, Kate Rubel and 5-9 freshman point guard Brie Rubel had to miss an array of minutes throughout the game due to being in foul trouble as they each had four entering the fourth. This didn’t stop Kate, Lucious and, of course, Tori from being dominant when attacking the rim as Kate drew multiple fouls for and-1 opportunities.

Despite Brie only scoring three points against Delta, she managed to record a season-high four rebounds and also had two steals. Rubel’s three points were, in fact, key to Notre Dame’s 16-3 run as she knocked down a deep 3 from the top of the key with a hand in her face. Her older sister Tori hit a dagger 3-pointer from the left corner on the Bulldogs next possession.

“Kate had like what? A couple of and-1s? She took it to [Delta],” Tori said. “And Brie always hitting those big shots and bringing the ball up the court — they’re very naturally talented, and I love playing with them. Having four fouls didn’t faze them, and I just love how hard everyone worked tonight.”

This was Tori’s third double-double of the season and second time in triple-double territory. Rubel registered eight points, seven rebounds, six steals and four assists in Notre Dame’s 53-28 win over Kennett despite not playing an entire quarter. She also had 15 points, five rebounds and five assists for the Bulldogs to beat Jackson 40-30 in the SEMO Conference Championship game.

While Rubel has always been able to fill a stat sheet over the course of her career, the UT Martin signee has just been that much more dominant in her final season with the Bulldogs. Along with leading Notre Dame in points (12.1 per game), rebounds (7.9) and assists (3.8), Tori has also hit six more 3-pointers than any of her teammates for a total of 16 treys.

Outside of her abilities on the court, Rubel also tries to act as a calming presence for the rest of her team. This has been a recipe used by past Notre Dame players in the past that has helped lead the Bulldogs to three state quarterfinals and one state final four appearance over the course of Tori’s career as a four-year starter.

“Well, we have a young team, so Anna and I are really the only experienced varsity players because everyone else is new to it,” Rubel said. “I know whenever I was a freshman, I was scared — it’s a lot of pressure — so I always looked up to the seniors and Lexi [Rubel] and Leah [Jansen].

“They always had that calming presence and that made me play better because I was like, ‘OK, we’ve got this.’ I know Anna and I are both trying to be that person for the younger players because we have such a young team. If you’re calm, it helps.”