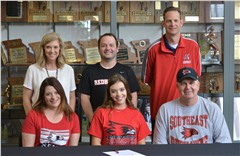 Following the most historic season for the Jackson cheerleading squad, senior Caroline Hume will be continuing her cheer career close to home at Southeast Missouri State.

Hume, who helped lead Jackson’s program to its first-ever state championship, has been cheering ever since she was eight.

Hume said she started cheerleading at such a young age because all of her friends were doing it. She was also doing gymnastics at the time and has always enjoyed tumbling.

At Southeast, Hume will continue to learn from Redhawks head coach Billy Hoskins, who has been with her from the start.

“I definitely didn’t want high school cheer to be the end of my cheer career — it’s just something I’m really passionate about,” Hume said. “I just wanted to keep doing it at SEMO with Billy.”

Southeast’s cheer squad had its own success this year by competing at the NCA Collegiate National Championships last month.

“Billy has been one of the best cheer coaches I’ve ever had,” Hume said. “He taught me how to tumble — he taught me basically everything in cheer I’ve ever learned.”

Jackson won the Class 4 Small Division State Championship by 1.4 points with a score of 333.3 points this season. The competition is also where Hume garnered all-state honors along with fellow seniors Maddie Scott and Maddy Walker.

“They were still celebrating the fact that we had won state [when they were named all-state],” Jackson head coach Jana Scott said. “[These seniors] getting all-state was icing on the cake, and what I loved about it was it truly highlighted the skills and leadership qualities I knew they had, and it was the perfect thing for their senior year.”

Hume said winning state has been the biggest accomplishment of her life so far, and she said it will even top graduating from college.

“Billy was actually one of our coaches with [Coach Scott] for state, so that was kind of special, too, that he got to help me win state for the first time in my life,” Hume said.

Hume, who is now the seventh cheerleader in Jackson history to sign a cheer scholarship, is excited to be with her former teammates and stay close to home.

Hume will major in marketing at Southeast while she’s not cheering on the Redhawks or performing at a competition.