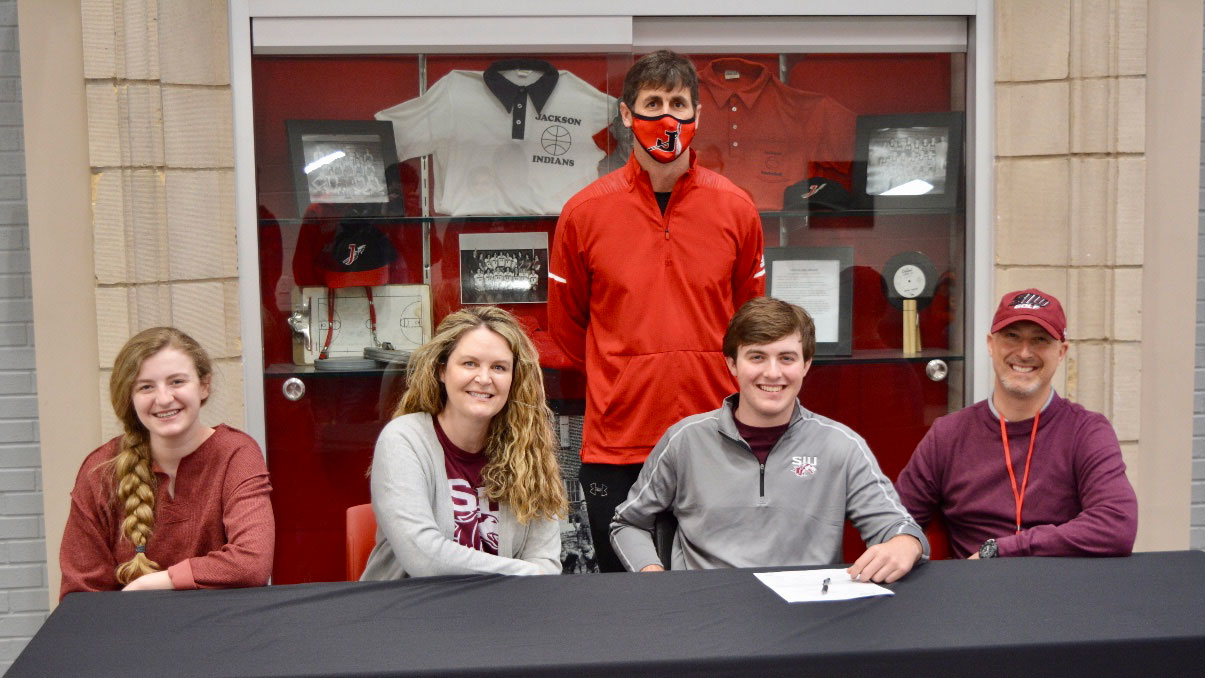 Silliman and the Indians were unable to defend their state title in 2020, though, since all spring sports were cancelled because of the coronavirus pandemic.

“We had a decent team, and we could’ve made a run [last spring],” Silliman said. “You never know what can happen in golf — it’s a crazy sport. It was disappointing to lose our seniors that didn’t have a season, which is what I was more worried about.”

While not being able to golf for Jackson during the pandemic, Silliman still went out to the golf course every day to practice like he usually does. There were no tournaments during this time, of course, but being able to practice so much allowed him to gain more distance and accuracy on his drive.

“Sophomore year, I was probably hitting it 240-250 [yards] off the tee,” Silliman said. “At the end of that year, I was probably able to hit it 280. I grew some and got stronger, so that was key. Then I was able to practice short game stuff, which is what’s really the necessary part for golf.”

However, Silliman now has one last ride with Jackson before his high school career comes to an end this spring, but the 2021 season will not be the final time he golfs competitively either.

Before teeing off with the Indians, Silliman officially signed his national letter of intent with Southern Illinois to continue his career at the next level. Playing golf in college — especially at the Division-I level — is something Silliman has aspired to do ever since he started competing in tournaments.

“I ended up deciding SIU about a month ago,” Silliman said. “The facilities are nice whenever we go to work out and stuff — it’s top tier. We work out in the basketball center, so everything is around campus. It’s nice to be able to stay around here, too.”

Silliman has played golf his entire life, but he first started playing in tournaments when he was around 13-years-old. What Silliman enjoys the most about the sport is the fact he can always get better.

“There are bad days and there are good days, but you want the good days to happen in tournaments, which is what you work for,” Silliman said. “Whenever it doesn’t happen, it makes you want to work harder. That’s what I like. The challenge of it.”

When Jackson won its first-ever state title, Silliman broke his foot the day before the biggest tournament of any high school season. Silliman said “It was bad,” but he played through the pain in order to make history as a sophomore.

“I just broke it walking,” Silliman said. “I don’t really know how. I always had foot issues, and it just kind of snapped. … I was limping the whole way through [state]. I broke it on like hole 11, so I was limping, and then I started limping more. I didn’t know it was broken, but you kind of get the feeling that something is up. It affected my swing because I wasn’t able to get through the ball, so I was just hitting it a little shorter. It took some adjusting, but it was doable.”

Silliman ended up tying for 22nd place with three other golfers as he recorded a score of 155 to earn Class 4 All-State for the second-straight time. The year before that, Silliman tied for 17th with a 152 his freshman season.

Jackson won the Class 4 State Championship by two points at 611 as Chaminade and Rockhurst tied for second behind the Indians at 613. Only two fellow Jackson golfers finished ahead of Silliman that year as 2019 graduate Case Englehart tied for seventh with a 150 as fellow classmate Tanner Walton tied for 13th at 151.

“We came in with hopes of winning the tournament, and we played well enough to get there,” Silliman said. “We dominated the whole way through, and we were down two the first day. Then we came back and won, so it was good to get that validation because we worked hard for it.”

Englehart and Walton are both now playing golf at the college level as Case is at Arkansas-Fort Smith, while Tanner has been playing at John A. Logan Community College. Silliman emphasized how much different team golf is compared to playing as an individual.

“You may want to give up on your own, and that just may be one tournament,” Silliman said. “For the team, that can affect everybody, so you want to play better and work harder for them.”

When Silliman is not on the golf course at SIU, he will pursue a career in business. His grandfather worked at Edward Jones and his uncle currently works there.