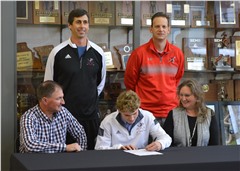 Jackson boys golf senior Case Englehart has been playing on a golf course ever since he could walk, and last week he signed a national letter of intent to continue doing so in college.

Englehart, who officially signed with the University of Arkansas – Fort Smith on Jan. 22, has wanted to play golf collegiately since he was 12-years-old.

“It means a lot — it’s what as a golfer I’ve kind of wanted to do my whole life,” Englehart said. “It’s a big accomplishment.”

Englehart visited the campus back in November and instantly enjoyed everything about it. He said he will enjoy being further south and feels that the team itself is trending in the right direction.

Englehart is coming off a historic junior campaign with Jackson boys golf as the team finished fourth in Class 4, while winning the conference, district and sectional championships. The Indians also finished the regular season undefeated.

This was the first time the program finished in the top four at state to receive a plaque in a tournament where Englehart placed 34th. Englehart also earned all-conference and all-district honors last season.

“Last year, we played really awesome throughout the whole season,” Englehart said. “We didn’t play bad [at state], but it definitely wasn’t our best performance. We still did well and got fourth, but it was almost a let down to us because we wanted to do better. This year we kind of have some unfishined business.”

Jackson will return every player from last year’s team, including John A. Logan signee and fellow senior Tanner Walton. Walton was the only player to earn all-state honors last season and also won an individual district title for the second-straight year.

Englehart and Walton have been best friends ever since kindergarten, and their bond has only been strengthened by the countless hours they still spend on the golf course together.

“When we started playing golf we were always out there together, and we’ve been super competitive among each other,” Englehart said. “We always want to beat each other, but whenever somebody wins, we are always happy for the other person.

Being able to witness this competition between friends has been Jackson boys golf head coach Zach Walton, who is also Tanner’s father.

Englehart said it’s weird with Walton being his head coach but that he loves it because practice sometimes just feels like “another day at the golf course.”

“What’s always been neat to see is their maturity as they’ve grown over the years from when they’re real little and how they handle things,” Coach Walton said. “To see his maturity go from where he was to where he is now is really cool to see as a coach. Going from where they couldn’t hit that driver over 200 yards when they were little. The driver was longer and taller than they were.

“Just to see him come in as a freshman and still hang in there and play with all the best players and make it to state as a freshman as little as he was then. Now these kids are hitting it out there about 300 yards — it’s cool to see.”

Englehart has qualified for state every season of his high school career, who knows he has to fill a leadership role in his final season. Englehart and Walton are joined by another senior, Jaden High-tower, to form a senior-heavy team.

“We just started doing workouts for our team,” Englehart said. “[Being a leader is] making sure everybody is held accountable, and making sure we’re doing things that are productive. Not necessarily just goofing off, but getting things done and everything you’re supposed to do.

“I’ve always kind of tried to be a leader but being a senior is a little extra push. We’ve got to get it done this year, so I have to do it.”