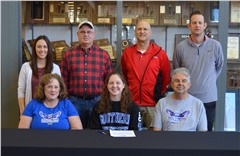 Ever since she was five-years-old, Jackson senior Faith Littleton has made swimming more than just a hobby — it’s become one of her passions in life.

On Thursday, Jan. 10, Littleton fulfilled one of her dreams of competing in the sport collegiately when she signed a national letter of intent with Southern Connecticut State University.

“It’s a relief because I have a very Type A personality, so it’s been stressing me out,” Littleton said. “It’s really nerve-wracking — I’m really nervous, but I know it’s going to go well, and I’m excited to swim in college.”

Southern Connecticut State is over 16 hours away from Jackson and is a colder climate, which was actually one of the things Littleton factored in during her college search. She also wanted to attend a school that had psychology with a focus in mental health available to study.

“I want to be a mental health counselor, and so that’s why I’m doing a concentration in mental health,” Littleton said. “That’s what I really liked about Southern Connecticut State because not a lot of schools have that concentration.

“I’ve grown up around people having different mental disorders and dealing with things like depression and stuff like that. I’ve always really liked helping people, and so I just really want to help them through that.”

Last year as a junior, Littleton qualified for state in a total of four events, which included the 200 and 500-yard freestyle, along with the 200-medley relay and the 400-freestyle relay.

For third-year Jackson swimming coach Rodney Montz, Littleton is the first collegiate signing during his stint with the program.

“This means the world to not only me, but to the team and all the other girls who are coming up behind her to see that you can develop,” Montz said. “[They can] develop a skill and go on to college and perform at a higher level.”

Montz said Littleton happens to be the hardest worker he has ever been associated with. Littleton said she has had to put in all of the hard work in order to be competitive and achieve her goals.

“Swimming is less of a skill sport and more of a endurance sport, and I’m a distance swimmer, so I drive on endurance,” Littleton said. “I can’t go two or three days without practicing and not feel it the next time I get in the pool. I always keep practicing so I can feel good in the water, and I know practice makes perfect. Even before I got in high school I knew I wanted to swim in college. Working hard is what it was going to take.”

In the fall before each swim season, Littleton became one of the top cross country runners in southeast Missouri by helping lead the program to its first-ever state championship in 2016.

Littleton also helped this year’s team place in the top 10 of the Class 4 State Meet in a season where she earned all-conference honors for a third time and finished her career as a two-time all-district honoree.

In last year’s SEMO Conference swim meet, Littleton captured an individual championship in the 200 freestyle with a .08 second win. The time of two minutes, 1.10 seconds in the race also earned her a spot at state.

One thing Littleton will be taking away from Jackson is something cross country head coach Andrea Talley always tells her, which is to run with courage and confidence.

One thing Littleton is concerned about attending college in Connecticut is the distance, but she’s confident she will make it work.

“I’ve talked to people that go away far for college, and they’re like, ‘You get really home sick the first two months, but you go home for Thanksgiving and Christmas,’” Littleton said. “I’ll definitely be calling and FaceTiming my family and friends a lot.”