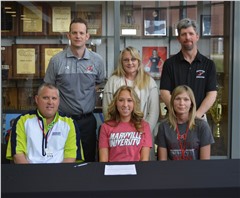 Just days before signing with Maryville University of St. Louis for an agreement to walk on as a cross country and track and field runner, Jackson senior Abby Sadler was informed she would be signing as a scholarship athlete instead.

Sadler said at first she was happy to be able to walk on, but she was brought to tears when she found out she was getting a scholarship.

“I just remember opening the email — tears are everywhere and I called my mom and was like, ‘They offered me a scholarship,’” Sadler reenacted. “It was a happy moment, and I was definitely very excited.”

Sadler started running competitively in eighth grade as a part of the Optimist Club, and this is where her eventual distance coach Andrea Talley “snagged” her.

“[Coach Talley] was like, ‘You’re running with us. You don’t need to be running short distances — you’re a long distance runner,’” Sadler said. “From there I worked with different coaches as well, and I realized this year I wasn’t ready to leave [running] behind.”

Sadler said she trained a lot more in the summer before this year than she has in the past. She even put in “double days” so she could run the mileage she needed to.

During her time at Jackson, Sadler said she has learned it takes a lot of team work to get anywhere.

“It’s not just you — even if you’re having a bad day you need to push your other teammates,” Sadler said. “They’ll push you back, so it’s definitely a team thing. Once you’re close as a team you become a family, and you’re never really alone. You always have to remember to bring in the back group even if they’re down.”

Heading into college, Sadler said she is looking forward to running against the competition she will see as well as how she can improve her times.

While at Maryville, Sadler will be studying physical therapy because even when she was little she knew she wanted to pursue something in the medical field.

In junior high, Sadler said she was hurt a lot, so she ended up working with trainers and would talk to them about their work.

“I thought to myself, ‘I really want to do this, but I know I want to take it further than just sitting in the track shed when I’m hurt,’” Sadler said. “I knew I wanted to do physical therapy right about this time last year when talking with the trainers.”