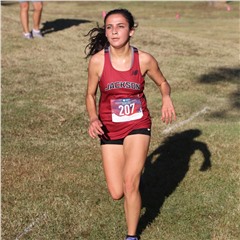 Nothing was going to stop the Class 4 District 1 cross country meet from being held Saturday in the Jackson City Park, not even inches upon inches of water from heavy rain the morning of the meet.

The drenched course was also not going to prevent both the Jackson boys and girls teams from placing in the top four to advance to sectionals.

Jackson’s girls team placed the highest out of the two in third place with 95 points behind first-place Cor Jesu Academy (46) and meet runner-up Nerinx Hall (95).

Crossing the finish line first for Jackson was none other than freshman sensation Mallorie Metzger, who came in at 13th place by posting a time of 21 minutes, 34.8 seconds.

Finishing in 14th place just 0.8 seconds behind Metzger was sophomore Addie Heisserer, who finished the race with a time of 21:35.6.

Placing in the top 20 next for the Jackson girls team was sophomore Maite Mendez with a time of 21:42.8 for a 17th-place finish. Mendez took 31st overall at 21:29.59 last season, but times were slowed down this year due to poor course conditions.

The next finisher for Jackson was freshman Sadie Middleton, who managed to take 32nd place by crossing the finish line at 22:33.6. Next was senior Kayden Fisher in 48th place with a time of 23:21.9.

The final Indian to cross the finish line for the girls team was junior Elizabeth Steele, who took 58th place with a time of 24:10.3.

Jackson’s boys team took the fourth and final spot to qualify for sectionals this season by scoring 90 points.

Taking the top spot for the Indians to garner all-district honors for the second time in his career was senior Luke Wendel, who took fifth overall at 17:30.1. Wendel finished in eighth place at last year’s district meet as he finished with a time of 17:29.89.

The next finisher for the boys team came 26.5 seconds later as freshman Cade McCadams was one spot shy of earning all-district honors for the first time by taking 11th overall. He finished the race with a time of 17:56.6.

The Indians had one more runner place in the top 20 as junior Evan Stephens finished in 20th place as he crossed the finish line at 18:12.1. Stephens finished 13th overall as a sophomore with a time of 17:49.23.

Walz was able to capture all-district honors as a junior when he took 10th place by posting a time of 17:35.97.

Wendel was the only runner for the boys to advance to state last year with a 27th-place finish at sectionals.