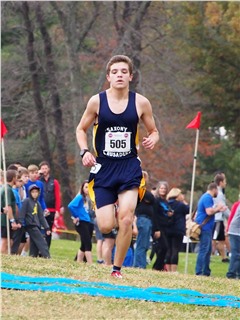 This marks the first time any Saxony cross country has won an individual state championship, and Cornelius did so by setting his own personal record with a 16-minute, 22-second finish to claim the gold.

Cornelius said he does not feel any different after winning the title, but he does feel great for doing so and being able to win it for Saxony.

Heading into this year’s state meet, it helped knowing the course at Oak Hills Golf Center since Cornelius had already run it and placed 10th to earn all-state honors his sophomore year.

What he said helped him the most from running this course was knowing how he would have to pace himself since he had to save his energy for “firehouse hill.”

“The first mile is relatively flat, and the second mile has the curves that will slow you down and take up energy,” Cornelius said. “The third mile is where all the hills are, and that’s where you have to run this course strategically. You have to pace yourself well for this course. You don’t want to go too fast because a lot of people beat themselves since they started out too fast.”

This was the first year where Cornelius was not the only runner for Saxony to compete at state as the Crusaders were able to qualify as a team with a second-place finish at districts behind St. Vincent.

Saxony placed ninth overall in Class 2, and head coach Larry Cleair knew this team could do so as he expected them to be in the top 12 regardless.

These last two years Cornelius had qualified for state, Coach Cleair has noticed a difference in work ethic from the junior after failing to reach Jefferson City his freshman year.

“When Caleb was a freshman, he was probably blessed with a great thing that happened to him. That is he didn’t qualify for the state meet,” Cleair said. “I think that might have kicked his butt more than anything I could’ve done because I was pretty sure he thought he was going to be able to make the top 15 at districts.”

During that same year is when Cornelius was introduced to a workout Coach Cleair has his runners do, which is ten 500s.

This is where the 5,000 kilometers in a regular 5K race is broken up into ten portions, and instead of setting a time, Cornelius would ask Cleair what time he needed to run it in.

“Caleb would run those to get them done,” Cleair said. “He would basically say, ‘What’s the time I need to run it in?’ He’d run it in that time, and if I tried to push him down lower and run faster, he would resist.”

After failing to place in the top 15 at districts to qualify for state in 2015, Cornelius took the workout much more serious.

“[Cornelius] would set a time, and then he would be disappointed if he wasn’t three seconds under the time he set for himself,” Coach Cleair said. “If he set a time at 18 minutes, he would be disappointed if he didn’t have a split that wasn’t 17:30. Usually on the last one, he would go for broke, and he’d be 15 seconds under. When he was doing those kind of workouts, I knew he was ready.”

One of the key motivating factors for Cornelius in this year’s race was making sure a runner from defending state champions Lamar did not beat him.

People were already telling Cornelius from the sidelines he had the race pretty much won, but he could not let up because the thought of a Lamar runner passing him forced him to push himself as hard as he could to finish with the best time possible.

Coach Cleair said a Lamar runner did not pass Cornelius because they did not run a smart race, whereas Cornelius did because he is a smart runner.

“[Having a state champion] is not a sign of great coaching because there have been some great coaches who were never blessed with an athlete that had the kind of skills of a state champion,” Coach Cleair said. “It’s an honor to have a runner that’s able to do that. I have a lot of friends across the state, and I felt like a celebrity because every where I walked after that race people were coming up to me and saying, ‘Great race.’ I had to admit that I actually didn’t run that race.”

There has been what Cornelius described as a “dry spell” for Saxony’s boys team failing to qualify for state, with the last time being in 2008 when the Crusaders reached the podium with a fourth-place finish.

Cornelius said he and his team qualifying for state this year was a better feeling than reaching the meet last year as an individual.

“I did hang out with the Woodland kids during state last year and that was very fun, but it’s a little different when you have people you run with every day being there with you,” Cornelius said.

Being a state champion gives Cornelius motivation heading into training for track and field this season, and his final cross country season in 2018.

One thing Cornelius will be doing differently in his workouts will be upping his mileage since he is at 25 to 30 miles a week right now.

Cornelius hopes he can reach up to 40 miles this winter and then 50 to 60 miles going into his final season at Saxony.

“I’m going to try and do even more mileage this season because compared to a lot of the cross country runners, my mileage is very low,” Cornelius said. “I also do swimming, so that can kind of account for some mileage, but still it’s not enough to be going under 16 [minutes]. I definitely need to push up the mileage this winter for track season and next cross country season.”

One hope for Cornelius is that he gets under the 16-minute mark and in the lower 15s, one reason why is because he currently has a wager with his father.

Cornelius’ father told him that if Caleb beat Austin Hindman’s state course record of 15:22 or runs a mile in under four minutes that he would buy him a brand new car.

Cornelius said running a mile in under four minutes is “99 percent not going to happen,” so he has his eyes set on Hindman’s state course record for what would be the final cross country race of Caleb’s high school career.

This means Cornelius will have to take off at least 1:01 from his personal record run this year, but he was able to get into the 16s after finishing with a 17:06 as a sophomore in last year’s state meet.

Saxony will also be returning all but one runner from this year’s qualifying team, and with a state champion in Cornelius coming back, Coach Cleair believes if everything falls in place that his team could reach the podium.

“It’s always nice to have someone you can pretty much count on for low points for a team,” Cleair said. “That makes your team’s chances a lot better. We’ll still have great competition because St. Vincent in Perryville was the team that won our district and finished fourth in state. I don’t believe they have a senior in their top-five runners, so they’re going to be tough.”