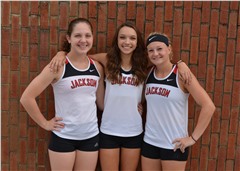 Two years ago, the Jackson girls cross country team made history by winning the first state championship in program history. This was also the first state title for any girls sport at Jackson.

Only three runners from that 2016 state title team remain, and they are now heading into their senior year.

Kennedy Bauer, Faith Littleton and Kaylee Wilson all have hopes to return to the state meet as a team once again after failing to do so last year.

This was in large part because the team was without Wilson, the lone all-state medalist in 2016, for a majority of the season with a hip labral tear she suffered as a sophomore.

Wilson missed her entire year of track that year and half of cross country her junior year, and even when she returned she had to take things slow.

“That injury was the worst news to me as possible,” Wilson said. “I was very upset and didn’t know I was going to be out for so long. I got to watch all of my friends run sophomore year of track, and I wanted that because I won’t get that feeling after I graduate. With cross country junior year everyone was like, ‘Well, you have one more year.’ Well that one more year is everything.”

Wilson said she was depressed after suffering her injury because she wasn’t sure how she was going to be able to make a comeback.

It took several months for Wilson to recover before competing once again, noting that she had to start back from square one.

Wilson didn’t first start running cross country until eighth grade after she could no longer play the sports she originally loved, soccer, after having too many concussions.

Wilson started playing soccer at a young age and had hopes of playing in high school and perhaps college, so she had to find a new sport to love once she could no longer play.

The thought of running cross country never crossed Wilson’s mind until a friend mentioned it to her in middle school, and she quickly became friends with Bauer. Both of them were born on Feb. 7.

“Kennedy and I have always been really close because we share the same birthday,” Wilson said. “We do the same sports, we both have ‘k’ names and we’re both like best friends. She’s only older by a couple of hours, so I still make fun of her and say, ‘I’m still the same age as you no matter how older you are.’”

Bauer did not run cross country until her freshman year, which is how she first met Littleton.

Bauer said she has always loved to run and even participated in youth track.

“[Running] was the only thing I could really do because I can’t really play sports that involve hand-eye coordination,” Kennedy laughed. “Coach [Paul] Fliege actually said, ‘Hey, I think you’d be a really good distance runner. You should try cross country.’ So I tried out freshman year, and I wasn’t the best. I was pretty good just starting out that year, but it wasn’t really a passion until sophomore year.”

During Bauer’s sophomore year, she became closer with Littleton as the two had a class together and bonded as the season went on.

Littleton attended St. Paul before coming to Jackson as a freshman where she first met Bauer and Wilson, who had met before in middle school.

Ever since Littleton was five-years-old, she has been a swimmer and started competing year-round at age 11.

It wasn’t until middle school when the cross country coach at St. Paul told Faith that since she was a swimmer she would be a really good distance runner as well.

“She kind of talked to me about it in seventh grade, but I was still playing volleyball — I hadn’t fully realized I was bad at it,” Littleton laughed. “Then I decided to try out for cross country eighth grade year, and I really liked it.”

When Littleton arrived to Jackson she said cross country was a way for her to make friends, and if she had never decided to run she probably wouldn’t have the relationships she does today.

Bauer and Littleton both ran on the junior varsity squad for the regular season during their freshman year as Wilson was already a member of the varsity team.

Due to injures, Littleton was able to become the alternate for the varsity team in the postseason for districts, sectionals and state, which is where her relationship with Wilson began.

It wasn’t until their sophomore year they bonded as a trio and formed what will forever be known as “The Pack” that led them to claiming the Class 4 State Championship.

Heading into that season, Littleton looked at cross country as an individual sport, but once the team started competing in the postseason and formed their pack, it became a team sport.

“We had a really strong group that could run the same times, and we were super close together,” Bauer said. “Being able to run together during speed days, practice and long runs really contributed to our closeness as a team.”

On the ride up to Jefferson City for the state meet, Bauer had a dream they won the title, so when she woke up she instantly alerted Wilson of what happened.

“I was like, ‘That’s a good dream to have. That’s awesome, Ken,’” Wilson said. “She’s like, ‘Oh my gosh I can’t believe it! I’m freaking out!’ After we won state I just looked over at Kennedy and was like, “Kennedy, the dream!’ It was a dream come true. God gave her a sign, and so it was really, really cool.”

The only runners who ended up making state the following season were Bauer and 2018 graduate Margo Motes, who signed a national letter of intent to run for Truman State.

Bauer was the top finisher for Jackson in the 2017 Class 4 state race as she took 18th place to earn all-state honors in only her third year as a cross country runner.

Bauer didn’t think she could accomplish that on her own heading into that season because Jackson made it to state as a team the year before, so she felt like she was carried.

“It was definitely a wake-up call for me because I needed to gain confidence to actually know I could make it to state myself and get in the top by myself without any other teammates,” Bauer said. “My goal was to make all-state by myself, and so every race you have to gain more and more confidence. That definitely helps you become a better runner and a more competitive runner.”

With Wilson out for most of the 2017 season and not being able to fully compete like she did the year before when she earned all-state honors, she was upset she couldn’t compete at the state meet herself.

This doesn’t mean Wilson wasn’t happy for Bauer because she certainly was. She was in fact heartbroken because she couldn’t run with Bauer.

“[Kennedy] just destroyed that cross country course,” Wilson said. “I was like, “I cannot wait till I get to do that with her.’ I was so happy for her, and I couldn’t have been more proud of her. She did an amazing job — she worked hard for it, and she earned it.”

Following the cross country season, Wilson had her eyes set on the spring, where she became the only runner on the girls track and field team to earn all-state honors.

Wilson did so by placing eighth overall in the 800-meter run, which is the second time she earned all-state honors in track. The first time was as a member of the 4×800-meter relay team as a freshman with Carli Knott, Megan Barnum and Chelsea Drum.

“I was really nervous at the beginning of the season of track,” Wilson said. “My left hip was starting to hurt, but I just needed to power through and make sure I don’t have anymore injuries because I needed that season. I took it slow and progressed in my workouts and payed attention to my body. When it came time for districts, sectionals and state — I gave it all I had.”

For cross country, athletes run many miles over the offseason for countless hours to be able to make the times they want to finish with during the season.

This is a way runners can bond over the summer until practice begins, and the three have been running together every single day heading into this season.

Wilson is still having to take things slowly to make sure she avoids another injury, but her and Bauer have been running side-by-side during workouts.

“I’m running with them and at the very end I’m like two seconds behind them,” Littleton laughed.

Bauer said it makes her really happy that Wilson has been able to run the speed days with them because of how much Wilson pushes herself.

“When she goes she’ll like take off, and it helps us to be able to try to stay up with her,” Bauer said. “She’s always been the type of person that pushes you at practice and encourages you.”

Bauer and Littleton said they have put in more miles than ever before heading into the season, and Bauer has even been keeping track of everything she does with a goal sheet she created with her father.

“We have little shiny sticker stars, and every time I do what I was supposed to I put the sticker star on there,” Bauer said. “Just having things written out like that makes things a lot easier, and I completed the whole calendar for the last part of the summer.”

Bauer is using last season as motivation for the other runners because if the rest of the girls can run together than they can reach state as a team once again.

It was a crushing blow for Littleton to have not made the state meet last year, so she wants her junior year to be the only year she didn’t reach the state meet.

For Wilson, she frequently thinks back to winning the state championship, which has been her drive heading into her final year.

One major focus has been making the underclassmen realize how much work they need to do in order to return to state as a team.

“Some of them just think, ‘Oh, we go to state any-ways,’” Wilson said. “No, we have to work for it. I feel like if we put that in their heads like, ‘Hey, if we did it once we can do it again.’ I feel like if we show everybody as a team that we could be that pack again we could make it up there.”