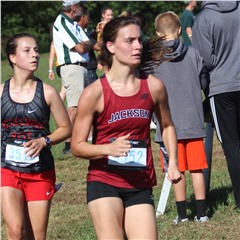 Jackson’s girls team scored 23 points while the boys team totaled
34 as each squad had five runners finish in the top 12 of the race.

The highest finish for Jackson in the meet was by freshman Mallorie
Metzger, who took second place with a time of 21 minutes, 55.93 seconds for the
girls team.

Taking first in the race was Dexter senior Margo Nea with a mark of
20:57.02. However, the Bearcats ended up finishing fourth as a team as only one
more runner from Dexter placed in the top 20.

Metzger was paced by sophomores Maite Mendez and Addie Heisserer,
who finished the race third and fourth respectively. Mendez took third overall
with a time of 22:20.29 as Heisserer finished a little over 20 seconds later at
22:40.71.

The fourth and fifth top finishers for Jackson were seniors Kayden
Fisher (eighth place) and Taylor Goodson (12th). Fisher recorded a time of
23:36.06, while Goodson finished at 24:13.49.

The final runner for the girls team to compete in the race was
junior Sophie McCadams, who placed in the top 20 at 16th overall with a mark of
24:52.66.

Taking the top spot for the boys team this week was senior Ethan
Walz with a third-place finish at 17:50.25. Fellow senior Luke Wendel, who
finished first for the Jackson boys in the last two races, came in right behind
Walz at fourth place (17:50.46).

The top-two finishers overall in the boys race was Poplar Bluff
junior Jaden Deaton (17:03.03) and Northwest senior Cody Poskin (17:20.5).
Northwest scored 70 points to be the meet’s runner up, while Poplar Bluff took
fifth.

The Indians will compete in the Gans Creek Classic this Saturday in
Columbia, which is the new site for state.