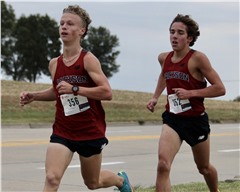 In last week’s SEMO Conference Meet, the Jackson boys cross country team continued its streak of winning the race to seven years thanks to a team score of 22, which was 48 points ahead of conference runner-up Cape Notre Dame (70).

Jackson’s girls team failed to win conference for what would have been the sixth-straight season as the Indians finished in second place with 36 points to Notre Dame’s 35.

Out of the boys team’s seven varsity runners, six of them placed in the top 10 to earn SEMO All-Conference honors. Four of the five finishes Jackson had counted towards its final score finished in the top five.

Leading the pack was senior Evan Stephens and sophomore Cade McCadams as they took second and third with times of 16 minutes, 41 seconds and 16:44, respectively. Winning the individual conference championship was Poplar Bluff senior Jaden Deaton as he crossed the finish line at the 16:10 mark.

The final two Indians to finish in the top five were senior Jake Eastin and sophomore Hunter Wendel. Eastin took fourth at 16:54 as Wendel finished the race three seconds later to take fifth.

Sophomore Cole Puls and senior Clayton Greenlee were the final two runners for the Jackson boys to earn all-conference as Puls took eighth place (17:58) and Greenlee was ninth (18:01).

“Six all-conference runners is an outstanding day,” Jackson head coach Andrea Talley said. “Team wise they are ready for districts, where they are looking for a top-two finish and state-qualifying berth.”

As for the girls, only four of its seven runners took the top 10 to garner all-conference accolades.

Crossing the finish line first for the Indians was senior Elizabeth Steele at 20:13 to finish the race third overall. Junior Addie Heisserer came in three seconds behind her to finish fourth place with a time of 20:16.

The final two Jackson runners to earn all-conference were juniors Layla Fliege and Maite Mendez as they finished seventh (20:57) and 10th (21:07), respectively.

“Our girls ran hard. We honestly knew that we had to have others step up and under the circumstances we knew it would be a hard fight on conference day,” Coach Talley said. “Very proud of their efforts. With district two weeks away, our goal now is to get healthy as a team. They are ranked in the top two, so now we just need to get all back on district day.”