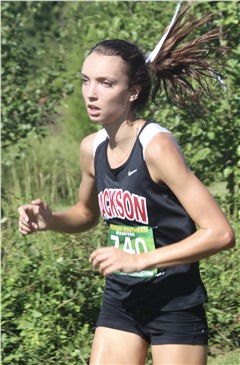 The Jackson cross country teams traveled more than five hours for the Missouri Southern Stampede meet in Joplin, where four runners were able to place in the top 100 of their respective race.

Three of those runners came from the girls team, who actually all placed in the top 73 as senior Kennedy Bauer was the first finisher in 31st place with a time of 20 minutes, 0.6 seconds.

The next finisher for the girls squad was fellow senior Kaylee Wilson, who posted a time of 20:40.8 to take 65th place.

Senior Faith Littleton finished exactly four seconds after Wilson did at 20:44.8 for 73rd place to be the final top-100 finisher for Jackson.

Coming in fourth place behind the three seniors was freshman Layla Fliege with a time of 21:50.6 to take 140th place.

Only one more runner finished in the top 200 for the Jackson girls, sophomore Sophie McAdams, who took 181st place as she crossed the finish line at 22:36.10.

There were a total of 308 competitors in the girls race, and the final three runners for the Indians all placed within the top 260.

The next finisher for the girls was freshman Addie Heisserer, who came in at 221st place with a 23:21.4 finish. Coming in 12 places behind Heisserer in 233rd place was junior Kayden Fisher, recording a time of 23:48.2.

Jackson’s final runner took 258th place, which was junior Rilee Leckie, who posted a time of 24:57.

The girls team combined for a total of 445 points to take 16th overall out of 37 teams in the meet as Lee’s Summit took first overall with a 66.

The lone runner for the boys to place in the top 100 of the meet sophomore Dylan Alexander.

Jackson’s boys team had two more runners finish in the top 200, with sophomore Evan Stephens taking 128th place as he posted a time of 17:55.6.

The next runner for Jackson to cross the finish line was junior Will McQuade at 190 with a time of 18:34.5.

Sophomore Jake Eastin was 11.1 seconds behind McQuade for 204th place at 18:45.6 as fellow sophomore Clayton Greenlee was the final finisher for Jackson at 225th place (19:03.1). There were a total of 370 runners in the boys race.

These places put Jackson in 23rd place out of 42 teams with a combined score of 663 as Bentonville took first with a 113.

The boys varsity team also had runners stay in Cape Girardeau County to compete in the Cape Central Invitational, where the Indians placed seventh out of 13.

The top finisher for Jackson was junior Ethan Walz, who took ninth place with a finish of 18:30.59. Sophomore Jack McCormack finished with a time of  19:18.08 to take 24th place.

Only one more runner finished in the top 50 for Jackson, which was senior Gavin Jones at 44th overall with a time of 20:37.36.

On Sept. 8, both varsity teams were supposed to compete in the Forest Park Invitational, but the meet was canceled due to inclement weather.

The last meet Jackson competed in prior to this past weekend was the Brooks Memphis Twilight Classic on Sept. 1, where the girls team took 13th place out of 43 teams and the boys 20th out of 51.

Littleton finished 10 spots behind Wilson at 63rd overall as she crossed the finish line with a time of 21:11.68.

In her first varsity race, Fliege was the fourth finisher for the Indians, who placed 123rd overall by posting a time of 22:17.44.

Both teams only have two competitions until the SEMO Conference Meet on Oct. 11, starting with the Marshall County Invitational this Saturday. That meet will be followed by the Capitol City Challenge in Jefferson City on Sept. 29.