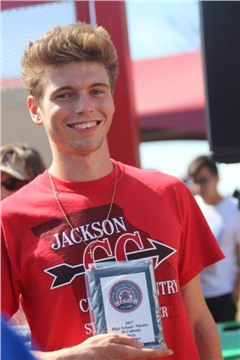 The Jackson cross country program split up this weekend on Saturday as the varsity runners took to Fayetteville, Arkansas, for the Chile Pepper Invitational and the junior varsity stayed in southeast Missouri for the Cape Notre Dame Invitational.

Only two runners for Jackson’s varsity placed in the top 100 of their respective races with senior Ean Buffington taking 12th overall for the boys and junior Kennedy Bauer placing 84th overall in the girls race.

Buffington ran a time of 15 minutes, 54 seconds to earn an award for placing in the top 15 of the race at 12 against 80 opposing schools with a total of over 650 runners competing.

Next to finish for the Jackson boys was junior Scout Pettit with senior Gage Kinder close behind him. Pettit finished 128th overall at 17:03 as Kinder came in at 134th place two seconds later.

The girls team placed higher overall in its race at 27th out of 74 teams, led by Bauer who recorded a time of 20:06 for her 84th-place finish.

Three more runners placed in the top 200 for Jackson starting with senior Margo Motes in 157th place at 20:51. Finishing four seconds after her was junior Faith Littleton for 168th place.

The girls team had two more runners finish in the top 400 with senior Abby Sadler taking 227th place at 21:31 and sophomore Kayden Fischer recording a time of 22:41 to finish 474th overall.

At the Notre Dame Invitational, two runners for the boys varsity team competed in junior Gavin Jones and freshman Evan Stephens, and both medaled.

No one ran in the varsity girls race for Jackson, but senior Julia Kidwell took first overall in the junior varsity race with a time of 22:43.

Jackson now has a full week off until Thursday, Oct. 12, when it will host this year’s SEMO Conference Championship Meet at Jackson City Park.

Both the boys and girls team won the conference championship last year, combining for a total of 10 all-conference runners (six girls, four boys).