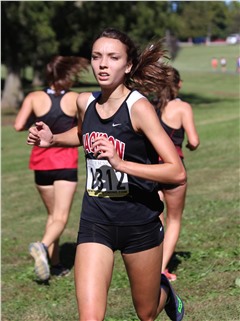 Bauer won this year’s district race with a time of 19 minutes, 48.27 seconds in her hometown at Jackson City Park. Coming in 6.92 seconds behind Bauer to take second was Cor Jesu junior Molly Rolwes at 19:55.19.

The Jackson girls also finished second for a second-straight season to qualify for this weekend’s Class 4 Sectional 1 Meet with a score of 71 to champion Lindbergh’s 66 points.

Winning last year’s individual title was Lindbergh senior Abigail Juedemann, but she was placed sixth at 20:24.11 in this year’s race.

This is now Bauer’s third time earning all-district honors as she came in fourth place as a sophomore in 2016. Jackson won the race as a team that year by having six runners finish in the top 10 as fellow senior Kaylee Wilson won the individual championship.

Wilson also earned all-district honors for a third time in this year’s race by coming in at 10th overall, finishing the course with a time of 20:45.59.

Last season, Wilson failed to finish in the top 10 at districts since she was still recovering from the hip injury she suffered the prior year. She still managed to place 29th overall to medal and qualify as an individual even though Jackson qualified for sectionals.

Senior Faith Littleton failed to capture all-district honors for the third time in her career by taking 14th place at 21:01.3, which still earned her a medal.

Two more runners medaled for the girls team as sophomore Elizabeth Steele was the next finisher at 21st place with a time of 21:19.97. Freshman Layla Fliege was the final top-30 finisher for Jackson as she was 27th overall at 21:25.98.

Fellow freshman Maite Mendez was only one spot shy of medaling for Jackson, finishing 31st overall with a time of 21:29.59, which was 1.79 seconds behind 30th.

In the boys district race, Jackson managed to finish in third place after taking fourth place back-to-back seasons to qualify for sectionals.

Four runners finished in the top 15 to score 70 points behind first-place Lindbergh (54) and runner-up Seckman, which scored 62 points.

Finishing first for Jackson was junior Luke Wendel in eighth place with a time of 17:29.89 to claim all-district honors for the first time in his career. He placed 38th overall in last year’s race at 18:17.

Junior Ethan Walz was also able to capture all-district accolades for the first time by taking the 10th and final spot, crossing the finish line at 17:35.97.

Finishing right outside of earning all-district and one spot behind Walz was senior Scout Pettit in 11th place with a 17:40.49. This is the second time in Pettit’s career to medal at districts since he did so as a sophomore in 2016 by taking 25th place.

Coming in 8.74 seconds behind Pettit to medal for Jackson was sophomore Evan Stephens at 17:49.23 to take 13th place.

Senior Gavin Jones was the final runner for the boys team to medal as he took 28th place with a 18:15.3.

The road to Jefferson City continues this Saturday as both teams will compete at Sectionals in Washington.