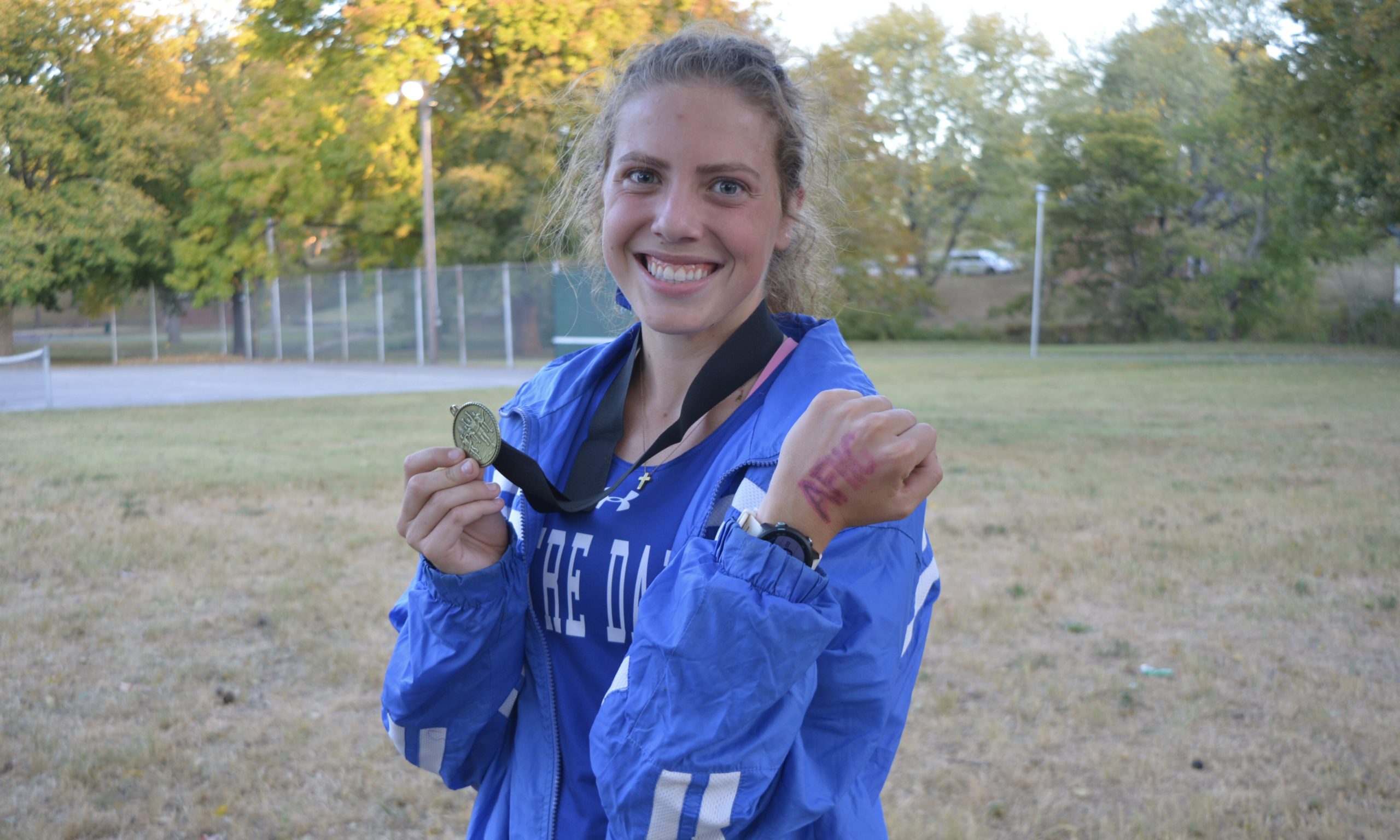 Notre Dame junior Lauren Eftink poses with her SEMO Conference Championship medal and holds up her hand with the abbreviation “AFHG” written on it, which is her motto and stands for “All For His Glory.” Photo by Jay Forness

Back when Lauren Eftink first started attending Notre Dame in 2020, she was primarily focused with her career on the basketball court. Fast forward to her junior year, though, and Eftink is the top girls cross country runner in Southeast Missouri.

Lauren proved this two weeks ago when she won her first-ever Individual SEMO Conference Championship in commanding fashion. She completed the race in 20 minutes and 16.4 seconds, which was 25.9 seconds ahead of the runner-up finisher.

“This season has been crazy because I came off a really good track season last year,” Eftink said. “I was hoping for some good times this year, but I was not expecting all these wins. I mean, I only won one race last year — Potosi — so now it’s like, ‘This is crazy!’ It’s so much fun, and I’m having a great time out here.”

Heading into this year’s conference meet, Eftink had placed second each year before and helped the Bulldogs win the team conference title her freshman year.

“It felt amazing to win the conference race, especially since I did get second two years in a row,” Eftink said. “Finally winning feels really good. It was a long course, and I knew I had to take it little-by-little. I just grinded it out and felt it out today.”

Lauren had never run cross country prior to her freshman year, but she wanted to because of her brother — current Southeast Missouri State runner Clayton Eftink — and she also wanted to make friends before high school. The summer before her freshman season is when Eftink joined the sport, and she loved it from the get go.

“Through cross country, I’ve grown in my faith and it’s really helped push me,” she said. “I love the team atmosphere, but when I started racing I realized, ‘Hey, I really like this. I love just being in my own and coming out here doing what I need to do to be as good as I can. I also love the work ethic in running — it’s so much fun.”

Two days after conference at the Farmington Invitational, Lauren set a new personal-record time of 19:24.18 to win her sixth-straight race of the season. Eftink also won this race marginally as another runner didn’t cross the finish line until 40.68 seconds after she did.

Eftink set her previous personal best earlier this season at none other than her home course at the Notre Dame Invitational Oct. 1, where she posted a time of 19:26.2. Second place didn’t come in until the 20:01.5-mark (35.3-second differential).

“That race was so much fun, especially with it being on my home course,” Eftink recalled. “I was so close the race before that because I went 19:37, and my P.R. was 19:33. I didn’t think I was that close to setting a new personal record at Notre Dame honestly, but then I came through and they told me my time. I was so happy and was feeling so good, too, because it was cool to set it at my home course.”

“I just don’t take any race for granted — I know that each race is important,” she said. “I just try to compete as best as I can and represent everybody, like my team, family and everyone who supports me. I try to do my best for them, and I just try to get even better every time.”

The only race Eftink did not win so far this season was the Memphis Twilight Classic at the beginning of the season on Sept. 3, which featured 334 runners from over 100 teams with six different states represented. Lauren took 11th place overall with at time of 20:05.5.

While Eftink usually completes a race in under 20 minutes, she says her times sometimes differ because of temperatures or what time of the day a race is held. Lauren said the end of the year is especially difficult since “you never really hit those times that you want to at the beginning,” because of difficult courses or weather.

“I remember at Memphis, it poured down rain just during the girl’s race, so we were like, ‘Ah! Come on,’” Eftink said. “What affects times are just the temperatures and conditions. Sometimes it’s the course when they feel really long like Jackson’s course because you never loop around and stuff.

“Driving to the conference race, I could feel the wind in my car and was like, ‘Oh no,’ but I think some of the trees helped block it. I definitely felt the wind at some parts like up on the hill.”

Last fall, Eftink not only took home all-conference and all-district medals for the second consecutive season, but she also became a first-time all-state medalist. She did so by taking 22nd overall with a time of 19:33.3 at the Class 4 State Championship Meet.

As a member of Notre Dame’s track and field team, Lauren also earned all-state honors by taking eighth overall in the 1600-meter run with at time of 5:17.04. She was one place shy of earning all-state in the 3200 as well.

Eftink said the most difficult part about being a cross country runner is simply getting out there and doing it. There are plenty of early mornings when Lauren would rather be sleeping in, but instead she’s usually either training or competing in races.

“Pushing through the hard workouts even when they’re not easy sometimes, but it’s really helped that I’ve had a good support system with my family and coaches,” Eftink said. “… It was really rough choosing between playing basketball and just focusing on cross country.

“I remember being really distraught, but I’m so glad I did it because I’ve been able to focus on being the best runner I can be. I love running — there’s nothing like it.”

This Saturday, Lauren and her teammates will compete in the Class 4 District 1 Meet, where she placed seventh overall last season and fifth the year before that. The district meet will be hosted at Fox, which Eftink likes.

“I really liked that course my freshman year, so I’m really excited to see what I can do and get some fast girls to race against,” she said.