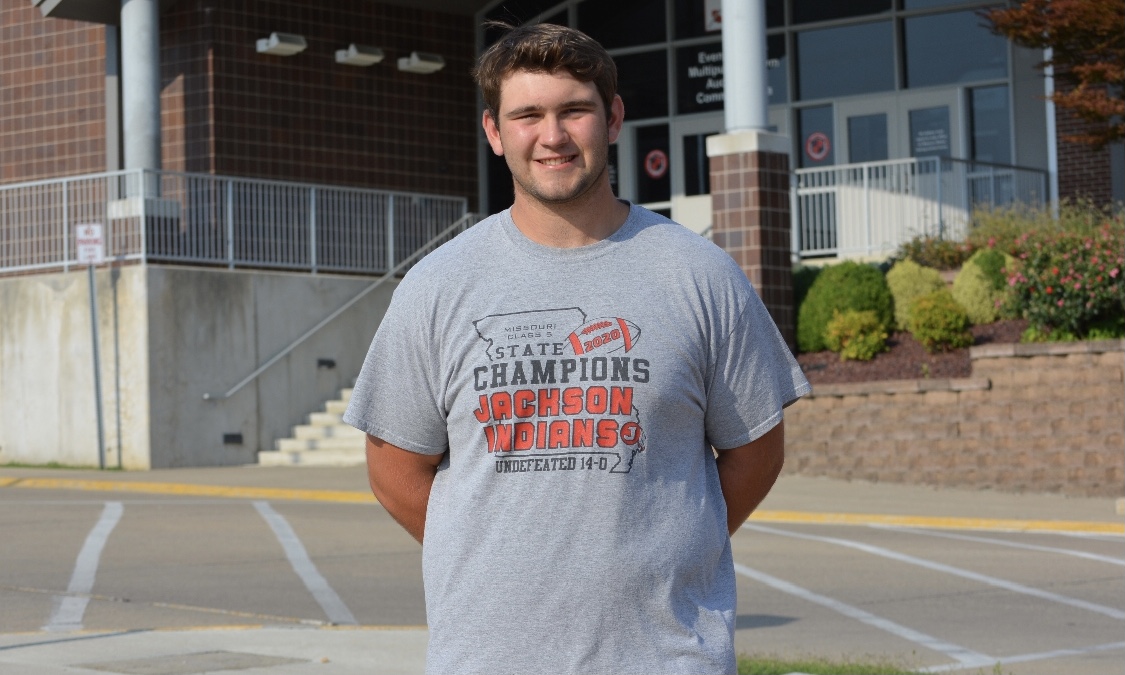 Jackson 2022 graduate Liam Bryant was named the 2022 Cash-Book Journal Male Athlete of the Year for the 2021-22 school year. Photo by Jay Forness

Following a senior campaign where Liam Bryant earned all-state honors in not one but two sports for the Jackson Indians, he has officially been named the 2022 Cash-Book Journal Male Athlete of the Year.

Bryant was first named all-state as an offensive lineman for the football team, which was his second-straight and final time doing so. Liam went on to earn all-state once again as the wrestling team’s heavyweight by taking fourth place in Class 4 at the end of the winter season.

“It took a lot of training and a lot of help from coaches,” Bryant said on how he’s been able to accomplish so much. “I’d go to football training in the morning and then wrestling training before lunch. Sometimes I’d come back in the afternoon, so it was just a lot of training and mental work that paid off at the end of the day.”

With football and wrestling season being back-to-back, Bryant said it certainly isn’t for the weak since there’s no break between seasons. He also said wrestling is “such a grueling sport” because of how physically and mentally demanding it is.

“You’ve got to be able to go six minutes and sometimes even more if you go into overtime,” Bryant said. “Moving a guy that weighs as much as you do takes a lot of energy, so you’ve got to be tough to do it.”

Bryant did both sports at a high level as the three-year starter helped the football team reach its third-straight state semifinal this fall. The reigning Class 5 State Champion Indians were undefeated up until the semifinals, where they fell to eventual state champions Webb City 35-21 to finish the 2021 season at 12-1 overall.

Despite not reaching the state title game for what would’ve been the third trip in a row, Bryant is extremely proud of himself and his teammates for what they accomplished. Liam and the 2022 senior class won four-straight SEMO North Conference titles, which no senior class had ever accomplished in Southeast Missouri history.

“We had a chip on our shoulder because everyone was like, ‘Oh, it was that [2021] senior class before you guys that really won the state championship,’” Bryant said. “It got us all fired up to win state again, and I think we succeeded because we lived right up to the standards. It wasn’t just that senior class that won it.”

Despite individual talent, Bryant said being a standout offensive lineman also takes being able to have good communication with the four other lineman on the field. One of the reasons why Liam and the Jackson offensive line have done so well the past three years and especially this season — having totaled 607 points (46.7 per game) this season — is because of chemistry.

“We’ve grown up playing football together through JAYF, so we were comfortable with each other and communicated well,” Bryant said. “We did offseason work together in the spring time, where we’d go through our different blitz pickups or different plays, so we could communicate and help each other out if we needed to.

“All summer long we were doing the same thing and even two-a-days. It all pays off in the fall because we don’t have to yell at each other — we feel each other out and help each other.”

On top of taking fourth overall in the Class 4 285-pound weight class, Bryant finished with an individual overall record of 35-5, won his second-straight district championship and first-ever SEMO Conference title.

In the championship semifinals, Liam only fell to the state runner-up by a score of 1-0 as that wrestler went on to lose the state championship match 1-0 as well. Bryant lost the final match of his career in the third-place bout by a 5-1 decision.

“I started out with Optimist and USA wrestling, but when I got to high school is when I really picked up wrestling and really tried my hardest at it,” Bryant said. “… I knew it was going to be a tough season because we were going to big tournaments. Through my mindset, I knew I was going to have to get the first point and last the longest.”

What Bryant feels like he improved on this football season was his technique, which he will only continue to fine tune while playing college football at Avila (NAIA). This mainly included making sure his body and eyes were in the right spot as well as what type of hand punch to use in specific moments.

“I’ve always wanted to go play in the NFL even though that’s a big stretch because I’m very undersized, but I at least get to move on to the next step,” Liam said. “I get to go play college ball, move away and experience something new but still play the sport I want to.”

If Bryant had to give advice to a younger athlete, it would be, “Definitely just trust the process of what your coaches have put out in front of you. They know what you need to do.”