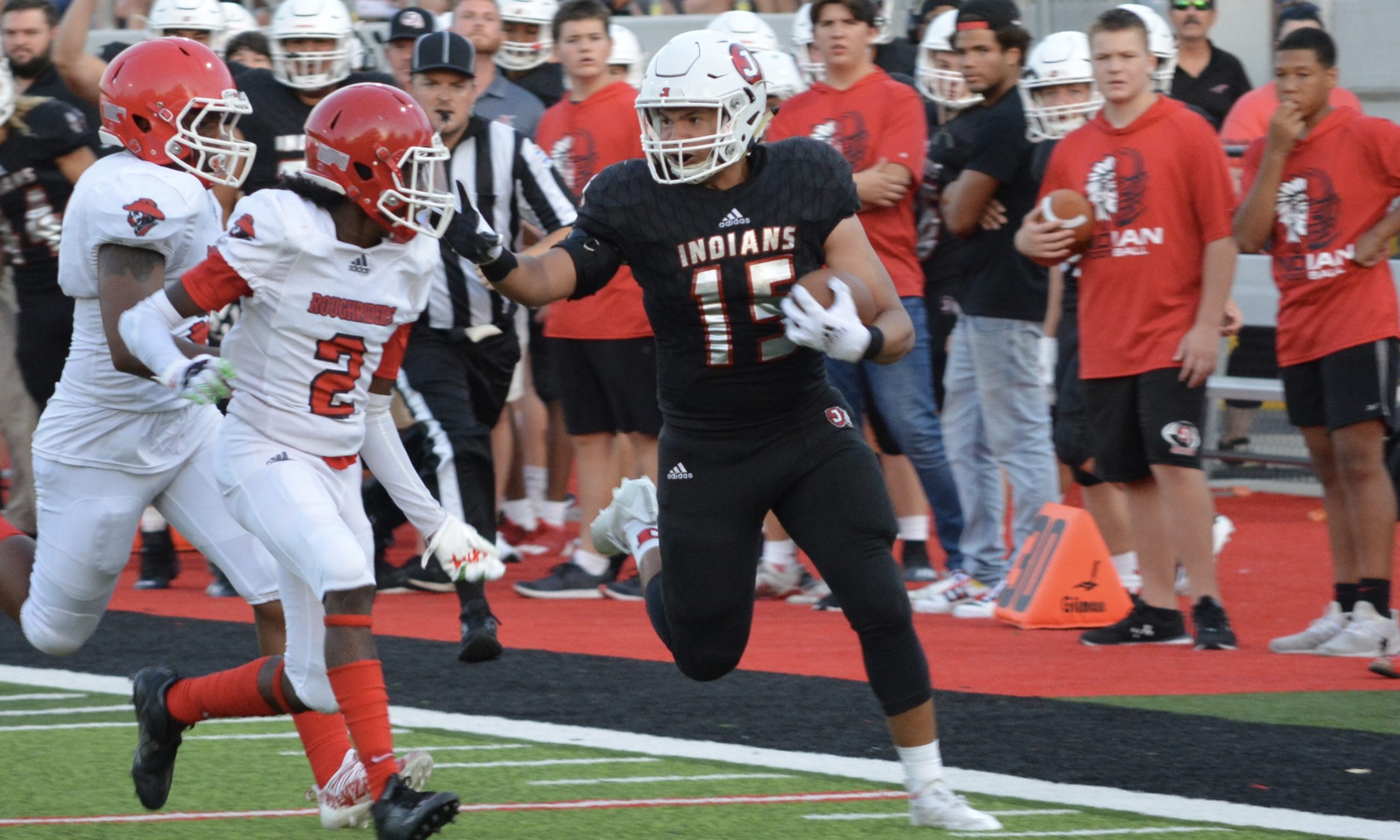 Senior running back Tony Williams, who has ran for nearly 1,800 yards and scored 28 rushing touchdowns the past two seasons, will help lead Jackson’s offensive attack once again. Photo by Jay Forness

For the past three seasons, Jackson football has been not only the most dominant team in Southeast Missouri but easily one of the best throughout the entire state.

The Indians have made three-straight state semifinal appearances and back-to-back trips in the state championship game (2019 and 2020). Jackson won its first-ever state title in 2020 and has had its season end to the eventual state champions three of the last four years.

Along with winning state, the Indians have only lost three games while winning 50 to capture multiple SEMO North Conference and Class 5 District 1 Championships during the span. Jackson has also had 31 all-state selections in that time with there being a total of seven last season, but they have all graduated now.

Thankfully for the Indians, though, this is a program that has proven it can reload at any position with all-state caliber success.

“We continue to string as much as we can to be as good as we can each year,” Jackson head coach Brent Eckley said. “It’s good once you’ve got some guys who’ve come through and set the bar high. It makes it a little easier when you’ve got players coming behind them to know how high that bar is and try to reach for it.”

The biggest question mark heading into last season was who would fill the shoes left by USA Today’s 2020 Missouri Offensive Player of the Year Cael Welker. Last year’s second team all-state quarterback Cameron Marchi stepped into the role rather effortlessly, throwing for 2,693 yards and 40 touchdowns with a 69.1% completion rate while only throwing four interceptions.

However, just because the returning starters Jackson brings back this season weren’t named all-state doesn’t mean much in the grand scheme of things. Two of them helped the Indians win the 2021 Class 5 State Championship, while others have more than proven themselves to be some of the best players that have suited up for Eckley.

Coming back for his final season will be none other than senior defensive end Tony Terry Jr., who verbally committed to Kansas this offseason. Terry is a two-time all-district selection and made the all-conference and all-region teams last fall after recording 86 tackles, 18 tackles for a loss, four sacks and four blocked kicks in 2021.

“We haven’t blocked him 15% of the time in practice — I feel like he’s made a really big jump from last year to this one,” Eckley said. “We’re looking forward to him playing really well for us this fall.”

Another Indian coming back for his last ride and was key to Jackson’s state-title run is senior running back Tony Williams. He eclipsed 1,000 rushing yards (1,009) for the first time in his career last season, along with scoring 16 rushing touchdowns on 156 attempts. During his sophomore campaign, Williams carried the ball 113 times for 746 yards and 12 scores.

“He’s looking really good coming back from surgery — this is two years for him now in the offseason that he’s had surgery and has had to come back from,” Coach Eckley said. “What I’m always impressed with by Tony is that I believe we can put him in any position on offense, and he can excel at it and know what he’s supposed to do maybe more than any other kid that we’ve got in our program.”

Joining Williams in the backfield will be a combination of junior Jason Goodman, who had his 2021 season cut short due to injury, and sophomore Zach Crump. Coach Eckley said he’d be “more than happy” to use three different running backs since it can change the pace of the defense due to player’s different running styles.

Going back to the positions left by all-state graduates, quarterback is up for grabs as it’s a two-man battle between senior Zach Calder and junior Adrian Fox. Neither have ever started a game for Jackson as Calder has always served as a backup, while Fox transferred in from Cape Central last school year.

Having been with Jackson his entire high school career, Coach Eckley likes the knowledge Calder has of his team’s offensive system.

“[Calder] has a good idea of where the ball needs to go before it’s snapped,” Eckley said. “He’s got quick hands, throws a good ball and I’ve been pleased with what he’s done so far. That’s a guy who’s a senior, so he’s waited his turn and watched. He’s paid his dues and certainly wants the job.”

As for Fox, what stands out to Coach Eckley is that he’s a little bit taller and rangier than Calder. He went on to say that Adrian has similar arm strength to Marchi when it comes to throwing the ball deep.

“[Fox] spins the ball real well, too, and is just about as accurate as Zach,” Eckley said. “He’s a little bit better of a runner than what Marchi was or what Zach is, but both of them are improving, working to their strengths and trying to be as good as they can be.”

Whoever wins the starting job will have quite the target to throw to in senior wide receiver Isaiah Davis, who hauled in a team-high 20 touchdown catches last fall. Davis, who Coach Eckley said reminds him of former Jackson star wide receiver Jordan Kent, also finished with 914 receiving yards on 52 catches and scored once on the ground.

“[Davis] had a great offseason and reminds me physically a lot of Jordan Kent as far as his speed, jump and strength,” Coach Eckley said. “If we can keep him healthy, he’s got a chance to get on top of people pretty regularly. I’m really proud of how his offseason turned out.”

Playing the opposite slot receiver position of Davis will likely be sophomore Kai Crowe, who is also going to replace Bruns as Jackson’s kicker. Coach Eckley has been impressed by Crowe this offseason.

“[Crowe] is a kid that’s matured a ton, and he might be the fastest kid on our team,” Eckley said. “If we’re healthy, we could be as good as we’ve been at the inside receiver position at any point in time since I’ve been here.

“Davis and Crowe are very similar — Isaiah is a little bit bigger but both of them are just super athletic. They both have a chance to win any kind of one-on-one matchup if the defense tilts the other way.”

Returning at tight end for Jackson is going to be junior John-Paul Sauer, who Coach Eckley describes as being an intelligent player that can be moved around. Playing at outside receiver will be seniors Chase Fischer, Zach Uhrhan and Ryan Calder.

Moving to the offensive line, the Indians not only graduated two all-staters in Flinn and Bryant at tackle and guard but also right tackle Tanner Raines. The two starters coming back to Jackson’s offensive line are seniors Clay Doza and Noah Gibson.

Gibson will move from his center position and take over one of the guard spots, while Doza is going to move outside to offensive tackle from his left guard spot.

The center position is up for grabs as junior Aidan Shaver and senior Carter Windbigler are battling for the spot. Senior Dalton Lohman will likely take over at guard opposite of Gibson, while junior Zane Coon is going to start at right tackle.

Coach Eckley feels like the offensive line has a chance to be “really good,” particularly because of how good Jackson’s defensive line is going to be this year. This is, of course, because these two units practice against each other everyday.

Moving to linebacker, senior Griffin Horman will man one of the inside spots after recording 113 tackles and nine tackles for a loss last fall. Heading into this season, Coach Eckley said that Horman is playing at a speed to where he would’ve fit in with 2020 Class 5 Defensive Player of the Year and current Southeast Missouri State inside linebacker Bryce Norman as well as 2020 all-stater Randol McDowell.

“He’s playing fast like that, so it’s been a huge, pleasant surprise for us,” Eckley said. “He reads well and has been physical and downhill, and he wants to attack the ball carrier on every play.”

Joining Horman at inside linebacker will be junior Peyton Klund, who hasn’t played a full season of high school football yet due to back-to-back injuries.

Returning at outside linebacker for the Indians will be junior Fisher Stevens, and he had quite the sophomore campaign for Jackson with 77 tackles, 13 stops for a loss and two sacks last season. Playing opposite of Stevens is going to be fellow junior Titus Jackson.

With players like Guilliams and another 2022 graduate in Blake Blackman no longer being in the secondary, it’s key for the Indians to have returning starters like senior safety Gavin Guilliams and junior cornerback TJ Altenthal.

Other players factoring into the secondary will be seniors cornerback Cole Vermillion, safety Drake Stewart and sophomore safety Cole Geiser.