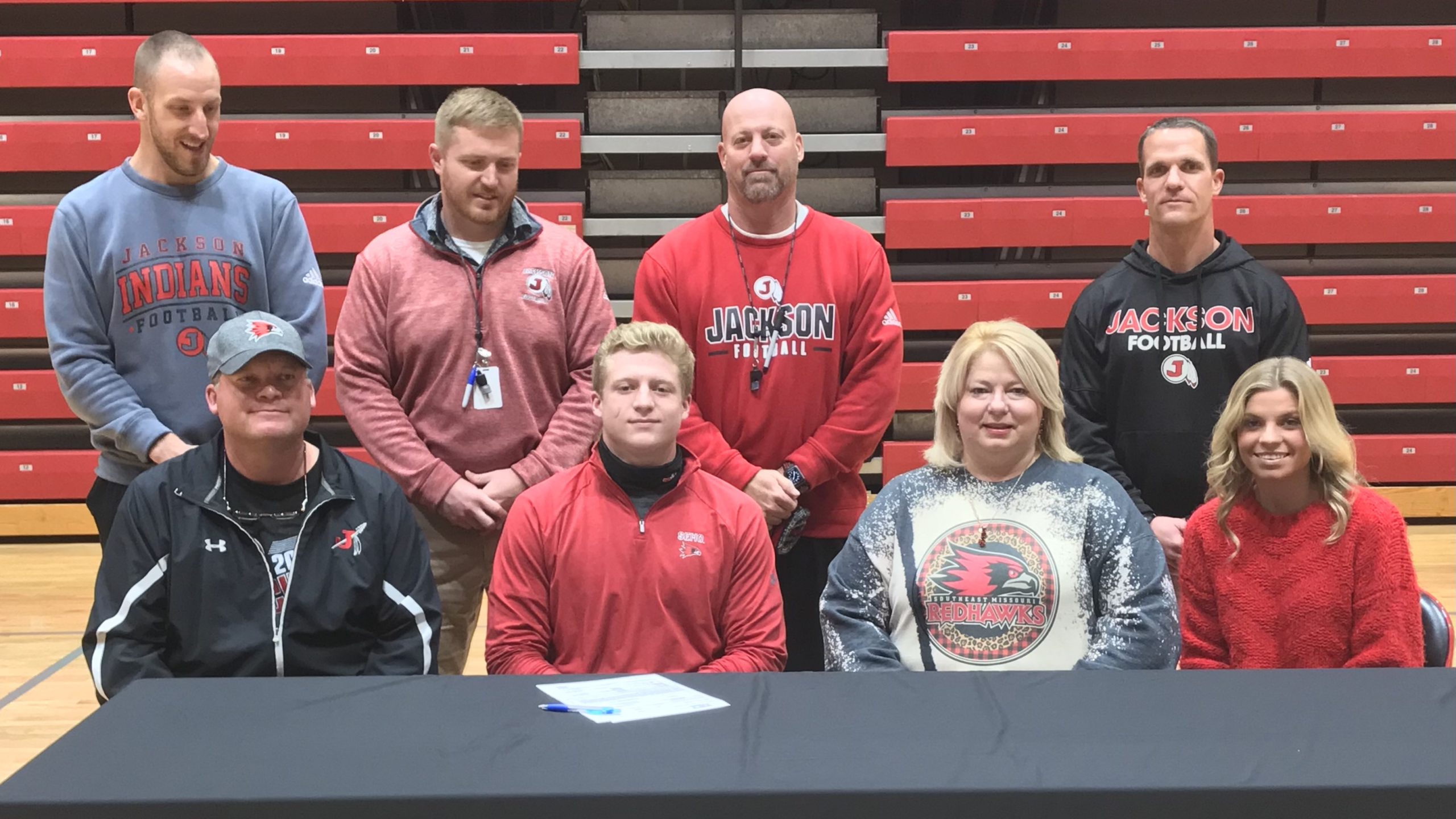 This was 11 days after the inside linebacker helped the Indians to win their first-ever state championship as they defeated Platte County 42-7 in the Class 5 state final Dec. 5 in Jefferson City. Five days after that on Dec. 11, Norman was not only named all-state for the second year in a row, but he was also selected as the Class 5 Defensive Player of the Year.

One more thing: The same day he signed with the Redhawks, Norman was named the recipient of the 2020 Derland Moore Award, which is presented to the most outstanding defensive player in Southeast Missouri.

“The past few weeks have been surreal signing and winning a state championship,” Norman said. “I feel like it’s all going so fast, but it’s just amazing. … Sometimes I’ll lie in my bed and think about it, but [it hasn’t all really hit me] yet I guess.”

Norman had only received two offers before SEMO defensive coordinator Bryce Saia phoned Norman the Sunday prior to signing day as the program wanted him to sign that Wednesday. It was one of the easiest decisions of Norman’s life since he had already planned on attending SEMO and trying to play football anyway.

“It meant a lot [to be offered by SEMO],” Norman said. “I feel like I’ve been waiting on a D-I offer for the past few years, and it finally came. Coach Tuke gave me a chance, and I can’t wait to get over there and work my butt off.”

For the last two years, the Redhawks have garnered national attention in the Football Championship Subdivision (FCS) by finishing in the FCS Coaches Poll’s Top 25. SEMO won its first-ever playoff game in 2018 and was ranked No. 15 in the final standings. The Redhawks finished at No. 16 in 2019 after taking home the OVC title and making the FCS playoffs for the second-straight year.

While on SEMO head coach Tom Matukewicz’s (2018 OVC Coach of the Year) staff, Saia has coached two of the best inside linebackers the Redhawks have ever had in their program. These defenders were none other than Zach Hall and Roper Garrett, who are currently SEMO’s No. 2 and No. 4 all-time leaders in tackles, respectively.

Hall, who finished with 406 career stops, was the most decorated of the two as he won the 2018 STATS Buck Buchanan Award (given to best defensive player in FCS) and was named the 2018 OVC Defensive Player of the Year. Garrett came up with 359 tackles in his career as he was a member of the 2015 All-OVC Team.

“I was able to watch them play a few times at SEMO, and then I’ve watched them online recently,” Norman said. “I’ve been looking up all their film and stuff like that to study how they became great linebackers over there. They played 100% every play, and that’s what I’m going to strive to do.”

Watching film and playing with a high motor is how Norman became arguably the best linebacker Jackson’s football program has ever had. Norman was named first team all-state his final two seasons, during which he recorded 353 stops along with 59 tackles for a loss, nine sacks, four forced fumbles and three interceptions.

This season, Norman led the Indians in tackles (173), TFLs (27) and quarterback rushes (12) while coming up with six sacks and three forced fumbles. Norman also managed to record a pick-six in each of his final two seasons as the first was 95 yards in 2019 and lastly for 75 yards this fall.

“I don’t think there’s been a play the past two, three years that I haven’t given 100%,” Norman said. “I run across the field, and I just never give up. It takes a lot of game planning, and I’d say a little bit of instinct. If you want to be amazing, you have to watch a ton of film. It’s always the work off the field that’s going to make you better.”

Linebacker was the first position Norman started playing when he first began his football career in second grade. Norman said he’s always had the size and, most importantly, the right mindset to play at arguably the most physical position one can find on the gridiron. “I like going one-on-one with another player to see who’s better, tougher and stronger. To see who’s worked harder in the offseason,” Norman said.

Jackson head coach Brent Eckley said Norman is the type of defender a coach could put anywhere on defense, and he would be the best player at that position. Eckley even went as far as saying he could’ve also played Norman on offense, and it would be the same case at almost any position.

“For two years now, I felt like he was the fastest guy on the field whenever we played,” Coach Eckley said. “I’ve told coaches this; I felt like he was clearly the best defensive player that we saw this year, and we saw him every day at practice. As far as game planning for everybody else [on offense], we would measure [defenses] against our linebackers. It was like, ‘Well, they’re not as good as what we see in practice.’ That gave us confidence.

“Bryce is fast. He’s gotten big and physical, and he plays really mean. Then he’s got a really, really high football IQ. He can see a play once and you might get him, but the next time one step in he’ll recognize it and you don’t have the play.”

Coach Eckley said this occurred in practice where the offense would run a successful play on Norman and the defense and would joke with him, “Ah, we got you!” However, the next time Jackson’s offense ran the same play, Norman sniffed out and stopped it.

Eckley went on to say Norman is such a great linebacker because of his ability to read offenses, see the field well and his recognition of leverage and angles.

During Norman’s freshman season in 2017 when he and other seniors like Randol McDowell, Garner Horman and Dimechi Herring weren’t starting on varsity, the Indians gave up a total of 406 points on defense.

Jackson’s defense recorded seven shutouts and has not allowed more than 32 points over the last two seasons as the Indians outscored opponents 1,413 to 311 in that span. The reason why Jackson didn’t have more shutouts is because Norman and the rest of the first-string defense were usually out of the game in the second half due to a substantial lead.

“Maybe not the most athletic, but I’d say we’re the most competitive defense in the state,” Norman said. “We come out there and don’t want to give up an inch at all. When Platte County scored the last touchdown at state and the game was already over, we were all furious. There’s only two minutes left, but we didn’t want that to happen. We wanted a shutout, so I’d just say we’re the biggest competitors in the state.”

No one should be surprised Norman grew up to become the football player he is today since his father, Brandon Norman, and uncle, Nathan Norman, both played at Jackson and in college as well. Nathan helped the Indians reach the Class 4 State Championship back-to-back in 1994 and 1995, but they lost both times.

“I told my uncle I’m not a two-time loser like him, and with my dad being a coach, he gets a ring kind of,” Norman joked. “It feels good to one-up the people you’ve been looking up to your whole life.”