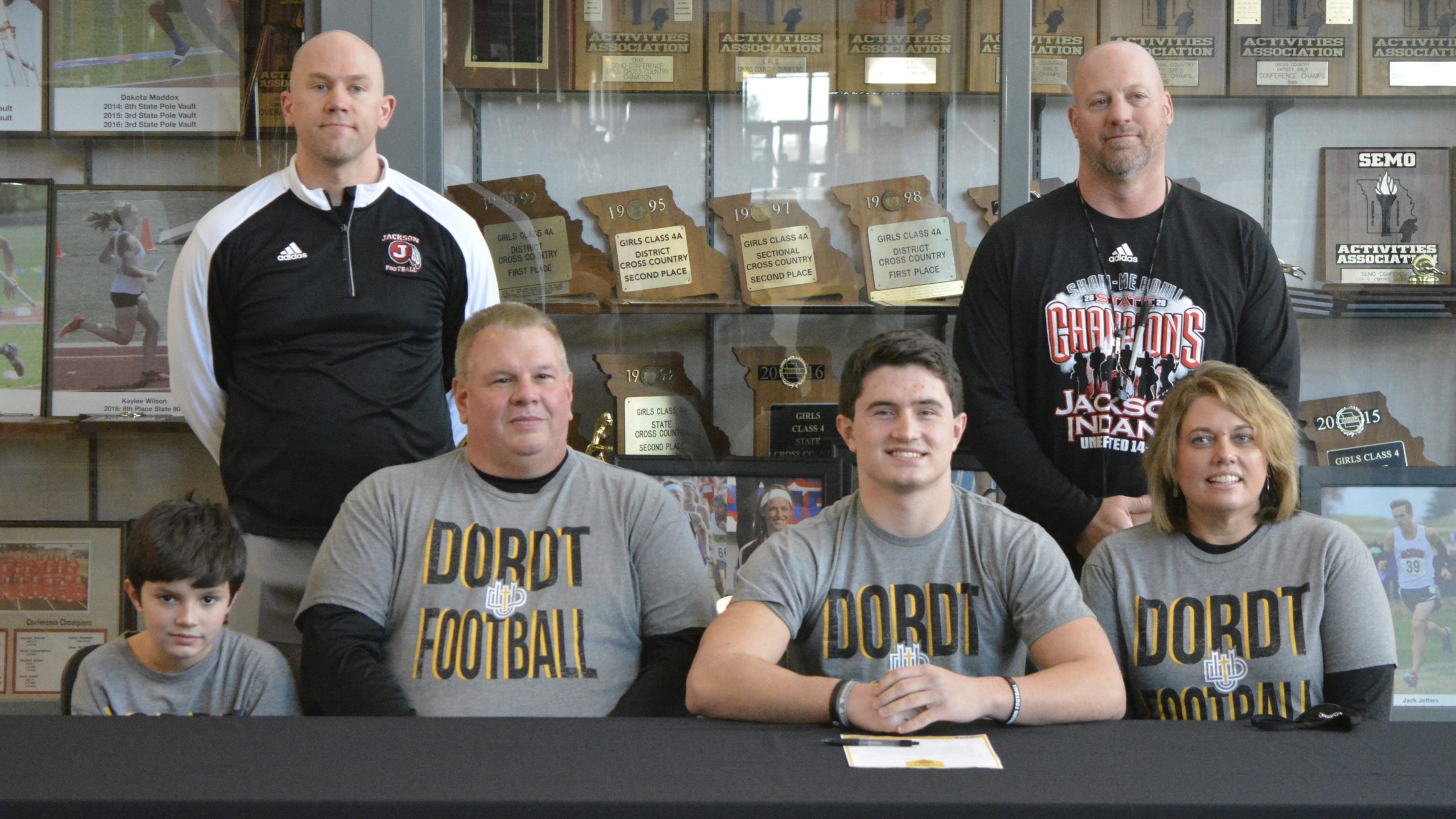 Growing up, Jackson senior Daniel Dickerson always had the dream of one day playing college football. He fulfilled that dream two weeks ago when he signed with Dordt University out of Iowa, but it was far from an easy road for Dickerson.

Dickerson suffered a torn ACL his junior year in just the second game of the season (Sept. 6, 2019). Dickerson was then forced to watch his team finish 2019 without him in a year where the Indians reached the state championship game for the first time since 1995.

Jackson came up short in the state title game by six points at 27-21 — one he believes would’ve ended differently had he been on the field.

“It was really emotional — it was tough just to sit there and watch,” Dickerson said. “I definitely came back with a vengeance. I didn’t like not being able to play last year and not help the team out.”

On top of all the work that went into building back his strength during rehab, the coronavirus pandemic made things even more difficult for Dickerson during recovery. One thing that helped Dickerson is that a classmate of his Dimechi Herring, who signed with Quincy University the same day of Dickerson’s signing on Feb. 3, also suffered a torn ACL in the same game Daniel did.

“We pushed each other all the way through,” Dickerson said. “We always compared and competed against each other a little bit, but that’s expected with us. I would say we’re brothers almost, and we built our relationship through it.”

Both Dickerson and Herring made full recoveries, of course, and helped Jackson win its first state championship in the program’s 125-year history this past fall. The Indians finished a perfect season at 14-0 and outscored teams 779-165 as Dickerson garnered all-state honors for the second and final time.

Dickerson was named first team all-state in Class 5 after leading Jackson’s rushing attack with 1,228 yards and 21 touchdowns on only 137 carries for an average of nine yards per attempt. Dickerson often shared backfield duties with sophomore Tony Williams, who paced Daniel with 746 yards and 12 scores off 113 rushes.

“I was definitely spoiled,” Dickerson said. “Two all-state lineman, and they all worked hard and are athletic big guys. I always had to thank them like, ‘Hey, want me to pick that up for you? I got you.’”

Dickerson burst onto the scene for Jackson in his sophomore campaign when he scored four rushing touchdowns in his first-ever varsity start against Webster Groves on Aug. 24, 2018. In that season, Dickerson finished with 1,378 yards and 22 touchdowns on 164 carries to be named second team all-state.

“I remember the first time I got the ball on varsity it didn’t seem real,” Dickerson recalled. “I actually remember the play. It was a screen to me, and I got the ball and ran up the middle for like 20 yards. My heart was beating like crazy, and then later on in that drive I ended up scoring a touchdown. Everything slowed down and I was like, ‘I got this.’ That’s a game I’m never going to forget.”

Dickerson has played several sports throughout his life like soccer, wrestling and track and field, but for him football was always his passion. Running back was the first position Dickerson played in JAYF, but he then became a lineman and after that a quarterback until junior high school before he returned to the backfield.

“I’m just a physical person,” Dickerson said. “I like to run through people — [running back is a position] where you can just hit people and not get in trouble for it. It’s like the linebacker of offense.”