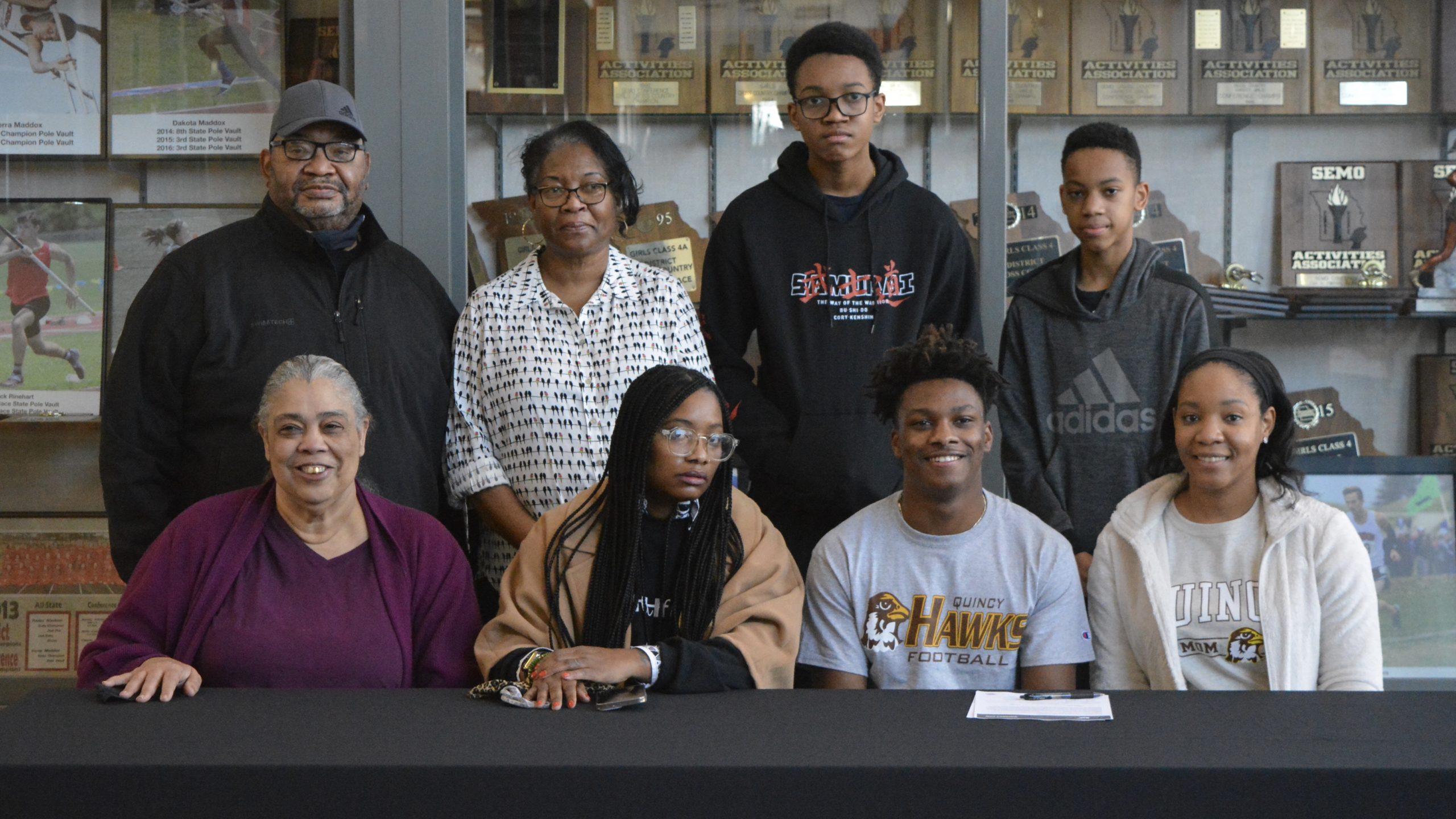 After tearing his ACL in 2019, Jackson football senior cornerback Dimechi Herring didn’t think he would have a chance to play collegiately. Fast forward to now after a dreamlike senior campaign with the Indians, Herring has signed with Quincy University (Illinois) to continue doing what he loves.

Herring recovered from his injury to help Jackson go undefeated at 14-0 overall and win the 2020 Class 5 State Championship — the first state title for a program that began back in 1895. Herring helped lead a defense that only allowed 165 points (11.7 per game) this fall.

When Herring was out, Jackson was able to make it to the state title game but fell by only six points, 27-21, to Carthage. This year’s state championship game wasn’t even close, though, as the Indians were able to defeat Platte County 42-7.

“The night before, I was super nervous — had to go to the bathroom with how nervous I was,” Herring laughed. “Couldn’t eat in the morning I was so nervous. Got to the stadium — still nervous. When we went out onto the field where they called our names, it just went away. I was just ready to play and probably had one of my best high school games.”

Along winning state, Herring was named first team all-conference, first team all-region and second team all-district after coming down with a team and career-high eight pass deflections, one interception and 28 tackles.

“This year was definitely a blessing. Very bittersweet I would say because COVID made it iffy on if we would play or not,” Herring said. “Thankfully we were able to play all 14 games, and none of them were really close. I was very glad that happened, but coming off the field for the last time it was a little heartbreaking. This was a great season.”

For all of this to happen, Herring said it not only took a lot of hard work personally for him to return from injury, but he also credited his entire family and team. “It just wasn’t me. Coaches, physical therapists, doctors — everything everyone could do to get me back healthy did it,” Herring explained.

Herring said the first part of his rehab was “very boring, very hard” as he could barely lift his leg two weeks following surgery. Herring admits it was a miserable time for him, but he was fully cleared seven months later to be able to work towards his senior year over the summer.

Even though the recovery was one of the most difficult things Herring has ever had to go through, he said the worst part was watching his team play in the 2019 state title game without him. He tore his ACL the same week fellow senior Daniel Dickerson did (versus Parkway North on Sept. 6, 2019).

Dickerson was the starting running back for the Indians with Herring serving as his backup. Dickerson suffered his ACL tear first, and the play right after that is when Herring went down with the same injury while filling in.

Before each state championship game, every player from both teams have their names called as they jog to the 50-yard line. Herring and Dickerson had to walk during this moment, of course.

“That just fueled the fire I had to get back and play,” Herring said. “It showed this year that I was ready. That pain will never go away — it’s easily memorable. Dan and I both having to go through it made it a little more comforting. We pushed alongside each other just to get back to where we could play again.”

As a sophomore, Herring played on both offense and defense as he recorded 396 all-purpose yards and five touchdowns off 51 touches at running back. He finished with 19 stops, two pass deflections, one forced fumble and one fumble recovery at corner opposite of 2020 graduate Markiese Jones, who currently plays football at McKendree University.

Herring is looking forward to playing cornerback in college, which is a position he had never been at until high school. “It’s easily the hardest position. It’s pretty much a two versus one — quarterback and receiver versus the corner. It never gets easier. It just gets slower for you.”